There are many on-ramps for the road to success. University of South Carolina retailing major Sarah-Jane Long found her entrance as a high school freshman, and all because of a fashion trend.

“It all started when I couldn’t afford my own pairs of jean shorts when I was in ninth grade,” says Long. “I started going to thrift stores.”

Not content with the thrift store finds as they were, Long put her creativity to work, transforming basic denim items into far more fashionable things. Her efforts led to the launch of a successful small business and, most recently, to a victory in the Student Designer Showcase at the university’s annual Fashion Week.

What Long does is known as “upcycling,” converting unwanted items into something not only different but also more desirable. It also contributes to sustainability, something in which Long strongly believes.

“I never throw away any scraps ever,” she says. “I will not throw it away because I want to recycle it and use it for other things.”

When UofSC Fashion Board, the student organization which organizes Fashion Week, made sustainability the theme for this year’s Student Designer Showcase, Long jumped at the chance to compete.

“This was the perfect opportunity for me,” she says. “I redid the outfit three times. We worked a long time on it.”

The outfit, a braided denim tube top and denim skirt, was made from several different thrift store finds. Long’s friend and fellow South Carolina student, Katie Turner, modeled it during the Student Designer Showcase, and the judges named Long’s design the winner of the evening. She won a private fashion design lesson with local boutique London and Lace, a prize which could be useful for her Etsy store and for her future.

Long hopes to go on to graduate school or design school after finishing her bachelor’s degree at South Carolina, and would love to have a career as a designer focusing on sustainability. 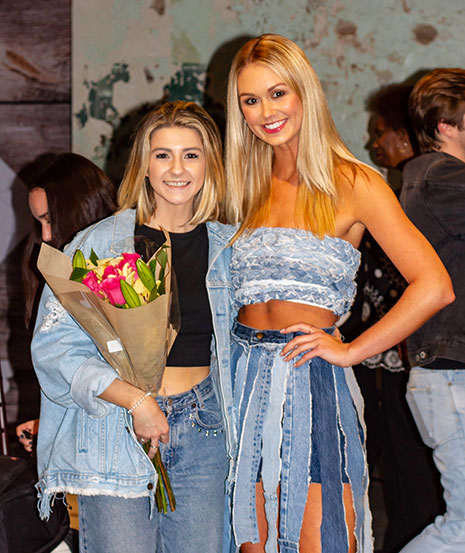