Hail to our squad of garnet and black! Pride in Carolina soared on April 3 as the University of South Carolina Women’s Basketball Team won its second National Championship.

Twenty-eight students energetically performed another round of the Fight Song as the players celebrated the NCAA Tournament victory.

Dawn Staley paused during the post-game frenzy, turning to present the NCAA trophy to the pep band. 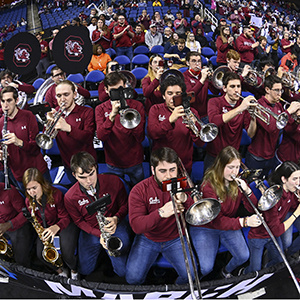 “Every time we’ve won something big — a championship — they played,” Staley said. “They’ve enjoyed it just as much as we have, and they don’t get a whole lot of exposure. They’re students at the University of South Carolina. Why not have pictures of them with the National Championship trophy?”

“Our NCAA run, excluding conference championship play, spanned three weeks, starting in Columbia, then taking us to Greensboro, and then onto Minneapolis,” said Carolina Basketball Band Director Dr. Quintus Wrighten. “Our students performed a lot, especially in Minneapolis, with multiple engagements each day. “Watching our students take pride in supporting the team, playing well, collaborating with Gamecock cheer and engaging fans from across the country was unfathomably gratifying.”

“Watching our students take pride in supporting the team, playing well, collaborating with Gamecock cheer and engaging fans from across the country was unfathomably gratifying.”

Director of Athletic Bands Dr. Jay Jacobs and Dr. Wrighten worked hard to rotate travel rosters so most of the students had the opportunity to perform on the road. This was especially important since the team couldn’t experience the NCAA Tournament last year due to university COVID-19 travel restrictions.

“The last few weeks of tournament play have been an exclamation point to a great basketball season. We relish supporting our team,” said Wrighten.

“As a director, I am immeasurably proud of how our students performed and conducted themselves on a national platform. We look forward to doing it all again next season!”