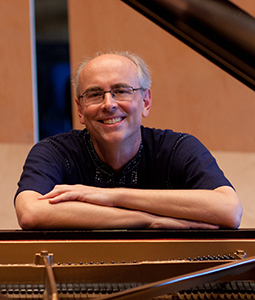 Acclaimed as "a pianist of poetry, elegance, and power" (American Record Guide),  "a pianist of exceptional, cherishable finesse" (Los Angeles Times), and "one of those rare pianists who combine structural intelligence with a hundred color gradations" (Village Voice), Phillip Bush has established a performing career over the past three decades that is noted for its remarkable versatility and eclecticism, with a repertoire extending from the 16th century to the 21st. Since the launch of his career upon winning the American Pianists Association Fellowship Award and subsequent New York recital debut at the Metropolitan Museum of Art in 1984, Mr. Bush has appeared as recitalist throughout North America as well as in Europe, Asia and the Caribbean. His Carnegie Hall concerto debut with Oliver Knussen and the London Sinfonietta was hailed by the New York Times for its "impressive last-minute heroics," as he substituted for an ailing Peter Serkin on short notice in concerti by Stravinsky and Alexander Goehr. Mr. Bush has also appeared as soloist with the Osaka Century Orchestra, Cincinnati Symphony, Houston Symphony and a number of other orchestras, in repertoire ranging from the Beethoven concerti to the American premiere of Michael Nyman’s Concerto for Harpsichord.

Over a ten-year period, Mr. Bush performed over 250 concerts in Japan with the piano quartet "Typhoon," including several sold-out performances at Osaka Symphony Hall and Tokyo's Bunkamura Orchard Hall. He recorded five CD's with the group for Epic/Sony, all of which reached the top of the Japanese classical charts. From 2007 to 2015, he served as Artistic Director of the Bennington Chamber Music Conference in Vermont, the largest (over 300 participants and 50 faculty) and oldest (founded 1946) institute for amateur chamber musicians to study with professional concert artists.

A devoted advocate for contemporary music, Phillip Bush performed worldwide for 20 years with both the Philip Glass Ensemble and Steve Reich and Musicians, in venues ranging from the Sydney Opera House to the Acropolis in Athens. He has also worked first-hand directly with many of the most significant American composers of our time, from John Adams to Charles Wuorinen. The New York Times has said "Mr. Bush may be one of the few pianists who can play both Elliott Carter’s music and Philip Glass' with equal persuasiveness." Mr. Bush's efforts on behalf of contemporary music have earned him grants and awards from the Mary Flagler Cary Charitable Trust, the Aaron Copland Fund, ASCAP, Chamber Music America and the National Endowment for the Arts. His discography as soloist and chamber musician has now reached over 45 recordings on labels such as Sony, Virgin Classics, Koch International, ASV, New World Records, Denon, Cedille, and many others.