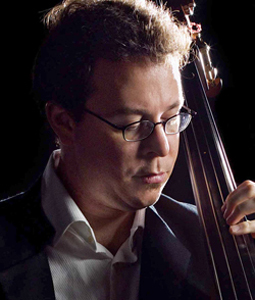 Craig Butterfield is professor of double bass and jazz studies at the University of South Carolina where he directs one of the largest double bass programs in the Southeast. American Record Guide has said “Craig Butterfield is nothing short of magnificent. I haven’t heard such expressive playing and virtuosic command since Gary Karr. His tone is gorgeous, his intonation rock-solid, and his phrasing expressive and flexible.” Soundboard magazine stated, “Butterfield can make his instrument dance and sing with an effortless which is hard to credit. (He must have a bionic left forearm). Not only can he inhabit the range of a cello, but he can make it light and lyrical when needed.”

Comfortable in many styles of music, Butterfield has performed extensively as a jazz artist as well as a classical soloist and clinician. During 2004 and 2005, he toured with the legendary jazz trumpet player Maynard Ferguson. As a member of Ferguson's Big Bop Nouveau band, he performed in some of the most famous venues in the world, including the Blue Note in New York, Ronnie Scott's in London, and the Bangkok Cultural Arts center as a special guest of the King of Thailand. A week at Ronnie Scott's in London was recorded and released as Maynard Ferguson’s final live CD release titled “MF Horn 6.” He has been a guest artist at the San Miguel International jazz festival in Mexico as well as the Ollin Kan world music festival in Mexico City, and has toured as a performer and clinician throughout South Korea and Japan. Butterfield has been active in the studio as well, appearing on many jazz CDs as both a performer and as a producer.

In the classical field, Craig Butterfield has performed concertos and given master classes and recitals as a soloist in many concert halls and universities throughout the United States. Butterfield’s main performing ensemble, Dez Cordas, a duo with guitarist Matthew Slotkin, has released two CDs in the past two years. “dances songs inventions” is available on Centaur Records and “Gone Away” is available on Summit Records. A recording featuring the Franck Violin Sonata with pianist Charles Fugo was also published by Centaur Records in 2011. Butterfield has been invited to perform recitals as a guest artist at the semiannual International Society of Bassists convention, the American String Teachers Association and the Violin Society of America.