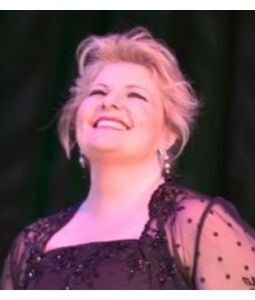 In the 2008/2009 season Ms. Hopkins presented masterclasses in California and New Mexico and performed Beethoven's Ninth in Kentucky, a solo chamber recital with the Redlands Chamber Music Society, and El Amor Brujo (Falla) with the South Carolina Philharmonic. Ms Hopkins continues to perform at Galas and Recitals in California and beyond. In 2007, Hopkins blended her own robust red wine, which was produced with her newest CD of Italian love songs recorded at historic Capitol Records in Hollywood. The project was called ARIA and received critical acclaim from the New York Times. USA Today named it one of the top Holiday Gift items of 2007. In August 2006, she performed at the Las Vegas Music Festival, where she was featured soloist in both a chamber recital and orchestral performance. She was also guest lecturer as she directed two workshops for young musicians. In addition to her affiliation with The Met, Ms. Hopkins is also concentrating her efforts on a concert series, The Diva Dialogues -- a unique recital of opera, musical theatre, and humor designed to educate, entertain, and bring the classics to a level where all may enjoy them in a relaxed atmosphere.

Ms Hopkins traveled to Japan where she toured with The Met in May and June of 2006 in Die Walküre. After moving to California in the latter part of 2005, Ms. Hopkins performed solo concerts and recitals including several performances with the Coachella Valley Symphony and the Caballeros Chorus of Palm Springs among many others. She performed the mother in Amahl and the Night Visitors and released two CD's, "So in Love" and "When I have Sung my Songs to You". Her 2005 work included her returning to The Met in Die Walküre, Der Rosenkavalier and Katya Kabanova as well as concerts throughout the Southwest. In 2004, Ms. Hopkins' performances at The Metropolitan Opera included Ortlinde in Die Walküre and Die Frau ohne Schatten. She recorded Ulysses Kay's "Three Pieces after Blake" for soprano and orchestra for Albany Records. In most recent seasons, she returned to The Met for the Overseer in Elektra, the Mayor's wife in Jenufa, Der Rosenkavalier, Die Frau ohne Schatten, Il Barbiere di Siviglia, War and Peace, Les Mamelles de Tiresias, L'Enfant et les Sortileges, Doktor Faustus and The Makropulos Case as well as with The Met on tour in Japan for Der Rosenkavalier and Rigoletto and solo concerts with the Palm Springs Coachella Valley Symphony. In the 1999/2000 season at The Met she sang Die Walküre, Aksinya in Lady Macbeth of Mtsensk, Il Barbiere di Siviglia, and Der Rosenkavalier. In January 1997, she debuted as Marianne in Der Rosenkavalier with the Dallas Opera, returned to The Met for Ludmila in The Bartered Bride and further Ortlindes in The Ring, followed by performances of the Wesendonck Lieder with the Bronx Symphony Orchestra and Santuzza in Cavalleria Rusticana. At The Met for the 1995/1996 Season she sang Ortlinde in The Ring, and the Chamber Maid in new production of The Makropulos Case and in 1997/1998 for performances of The Makropulos Case, Khovanschina and Elektra.

Ms. Hopkins debuted as a soprano and at The Metropolitan Opera during the 1991-1992 season in The Ghost of Versailles, returning during the next seasons for Siegrune in Die Walküre, Parsifal and the Overseer in Elektra. While on tour with The Met in Japan, she sang a series of solo recitals in Tokyo, garnering extensive critical acclaim. As a mezzo soprano, Hopkins sang Cosi fan Tutte with the Eugene Opera and served apprenticeships with the Michigan Opera Theatre and Des Moines Metro Opera. While making her vocal change, Miss Hopkins was awarded grants and prizes from The Luciano Pavarotti International Voice Competition, the American Opera Auditions and the Wagner Society Grant along with a study grant from the Singers Development Fund of The Metropolitan Opera.

In addition to touring extensively with The Met, Ms. Hopkins has performed in Japan and throughout Europe, as well as all over the United States. She has appeared at Carnegie Hall and at the opening ceremonies of the 1980 Winter Olympics in Lake Placid, NY.