The Department of Exercise Science (EXSC) has selected three graduating seniors, from among those nominated by faculty members, to receive 2016 Outstanding Exercise Science Student Awards. This year’s winners, chosen for their academic achievements, community service and leadership roles, are Annie Grove, Lily Gullion and Jonathan McGahee. They each received a commemorative plaque from EXSC Undergraduate Director Barbara Cuevas (pictured above, far left) and EXSC Chair James Carson (pictured above, far right) in recognition of their achievements.

I decided that I could never have a career where I did not feel like I was truly helping people and making a difference.

Grove began her tenure at Carolina as a member of the cross country and track teams and struggled to redefine herself after she quit athletics after her freshman year. After reaching out to a professor to get involved in the Exercise Science Club, she was pleasantly surprised to find herself serving as treasurer right away. Grove ran with it, serving as Vice President the following year, and then as President the year after that—her senior year. “I believe my greatest achievement through the Exercise Science Club has been guiding others to find their own passion for helping people.”

The Capstone Scholar and McKissick Scholarship recipient also found unexpected purpose through her involvement with United Cerebral Palsy (UCP). “Volunteering with UCP completely changed my entire perspective of the world,” says Grove, who received the 2014 UCP Volunteer of the Year Award. “I decided that I could never have a career where I did not feel like I was truly helping people and making a difference.” In addition to her service and leadership activities, Grove gained research and practical experience with EXSC Associate Professor Michael Beets’ Policy to Practice in Youth Programs and American Red Cross-Disaster Relief Services while maintaining membership in honors societies and the President’s List. For her efforts, she earned Graduation with Leadership Distinction in Community Service.

I have loved every minute of being part of the exercise science department, the Perceptual Motor Development Lab, Capstone, and the Undergraduate Research Program at USC.

Determined to graduate with her undergraduate degree in just three years, and yet committed to making the most of that brief tenure, Gullion decided to say “yes” to the opportunities that came her way. During her freshman year, she secured a research position with EXSC Assistant Professor and Director of the Perceptual Motor Development Lab Roger Newman-Norlund. For this project, she won a Magellan Apprentice Grant to pay for her salary while she worked to promote teamwork and communication skills to children at an after school program. The Capstone Scholar also earned a spot on a mission trip led by Clinical Associate Professor Patrick Hickey (College of Nursing), who is also the faculty principal of the USC’s Capstone Scholars Program, to provide medical services in rural Nicaragua. “(That trip was) an eye-opening experience, and I knew that I wanted to travel again in my college career,” Gullion says.

Her work with Newman-Norlund continued, which had now evolved to focus on using video games to enhance the social skills of individuals with Autism—again funded by a grant that Gullion had secured. By then a Magellan Ambassador, she won a second Magellan Scholar Grant (despite a denial of her initial proposal) and successfully crowdfunded the rest of her $6,000 goal to travel to the Netherlands to delve deeper into the topic. Graduating with Leadership Distinction in Research in May, Gullion will immediately begin her Master’s in Occupational Therapy program at MUSC the same month. But it will be a bittersweet transition. “I have loved every minute of being part of the exercise science department, the Perceptual Motor Development Lab, Capstone, and the Undergraduate Research Program at USC,” she says.

Being an exercise science student at USC has meant the chance to learn, work, and serve with the help and encouragement from a stellar staff and advisor.

McGahee has always had his sights set on a career in medicine, and he believes his tenure at Carolina has helped him get there. In addition to being named on the President’s list all four years, he has also spent time building his leadership skills and experience outside the classroom. EXSC faculty members introduced McGahee to research through Ho-Jin Koh’s work with adipose tissue. His classmates helped connect him with volunteer opportunities at two local organizations that align with his career path: a free medical clinic and Healthy Columbia. “Both of these opportunities to give back to the local community have helped me appreciate the direction and path that my education is leading me on,” he says.

Outside his department, McGahee found additional service and leadership roles. He worked as a peer tutor and supplemental instruction leader at USC’s Student Success Center and organized events as a summer conference assistant and as an event manager at the Capstone Conference Center. McGahee also served as Secretary and Director of Risk Management for of the South Carolina Alpha Chapter of Phi Delta Epsilon, a medical fraternity, and provided medical services at a clinic during a service learning trip to Belize. “Being an exercise science student at USC has meant the chance to learn, work, and serve with the help and encouragement from a stellar staff and advisor,” he says. “I will never forget my time here and the lessons that it has taught me." 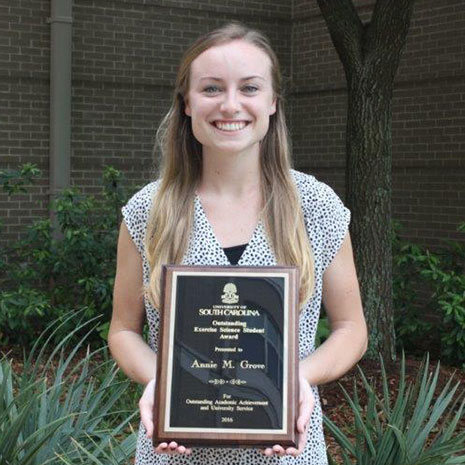 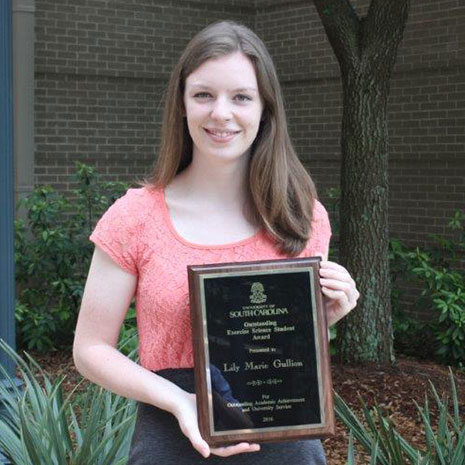 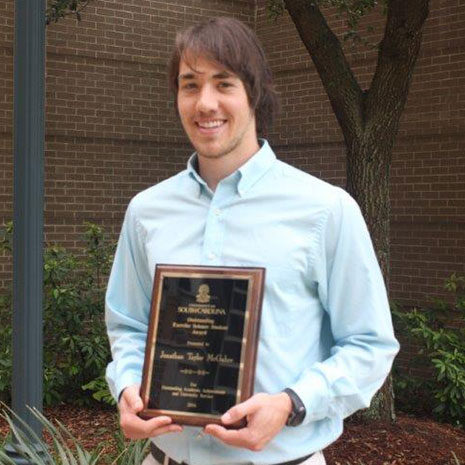