The Arnold School of Public Health’s Department of Health Services Policy and Management and the Institute for Partnerships to Eliminate Health Disparities (IPEHD), along with the S.C. Department of Health and Environmental Control’s Office of Minority Health, hosted the 9th Annual James E. Clyburn Health Disparities Lecture on Friday, April 1at the University of South Carolina Alumni Center. Students, faculty, staff, members of community organizations and citizens from across the state participated in a poster session and an interactive keynote presentation by the President of the American Public Health Association, Camara Jones, MD, Ph.D., MPH (read more about her background).

The theme of this year’s Lecture was “100 Years of Health Disparities: Is There a Will to Improve the Health Status of All?” Jones delivered a deeply engaging discussion on health disparities that challenged everyone in the audience to uncover, rediscover, or ignite “the will” to eliminate inequities and address the pervasive racism that has dominated the United States for centuries. She also pointed out that not everyone who needs to be a part of the conversation was in the room or even aware of the disparities that need to be addressed so part of the audience’s charge, she noted, is to engage others in this effort.

“My discussion today is going to equip us with communication tools and framing tools to understand how we might more effectively address these health disparities and specifically talk about naming and addressing racism as a threat to the health and well-being of the nation,” Jones said as she invited the audience to actively participate in her presentation. “This is something for all of us to grapple with together.”

My discussion today is going to equip us with communication tools and framing tools to understand how we might more effectively address these health disparities and specifically talk about naming and addressing racism as a threat to the health and well-being of the nation.

She explained, through research, allegories and logic, the various elements that contribute to health disparities. To make a change, we must understand how health disparities arise and how they manifest themselves, namely through differences—according to race—in quality of care, access to healthcare, and the conditions of our lives. But why do these differences exist?

Jones explained that racism, which is foundational to our country, underlies much of the dysfunction within our systems and structures. In this context, she defines racism as a system—rather than a personal character flaw—a system of power that structures opportunity and assigns value based on the social interpretation of how a person looks (i.e., race). Then she discussed the impacts of this system.

“It (racism) unfairly disadvantages some individuals and communities, but it doesn’t take very long to understand that every unfair disadvantage has its reciprocal unfair advantage so that racism is also unfairly advantaging other individuals and communities,” Jones said. “And that’s the whole issue of unearned white privilege that we hardly ever talk about in this country.”

According to Jones, racism is sapping the strength of our whole society by permeating it at three different levels: institutionalized racism (i.e., system of differential access to goods, services, power, resources and opportunities by race), personally-mediated racism (i.e., differential assumptions about the abilities, motives, and intents of others by race and then differential actions based on those assumptions), and internalized racism (i.e., self-devaluation and acceptance by stigmatized races of negatives messages about one’s own abilities, worth, etc.). The fight against racism is “our story,” Jones told the audience, and defining these levels provides us with tools for engaging in discussions about racism and addressing it. “Given the will, what is the way?” she asked. And then she answered.

Whether purposeful or not, the effects of racism are the same. It leads to social inequities, health inequities, and is simply a waste of the “genius” that exists within marginalized groups—gifts and talents possessed by individuals across races. “If we were to fully invest in that genius, we’d be doing so much better as a nation and even as a world,” Jones said. However, there must be a strong interest (i.e., a will) in understanding and addressing inequity. First, we must identify the mechanisms through which racism occurs: structures (i.e., particularly making sure that all issues are on the agenda and that all parties are present in the decision making), policy (i.e., the written aspect of decision making; review existing policies, create new ones, etc.), practices/norms (i.e., unwritten components of decision making), values (i.e., why we make these decisions).

Once you know, you are equipped to change things.

Then we need to know what health equity really is—what is it we are trying to achieve. Jones explained that health equity is a process; it’s the assurance of the conditions (not just outcomes) for optimal health for all people. Achieving health equity requires at least three things: valuing all individuals and populations equally, recognizing and rectifying historical injustices, and providing resources according to need. Next, she identified the barriers we face when taking on this challenge: historical (i.e., racism seen as happenstance and unchangeable), narrow focus on the individual (i.e., self-interested, limited sense of interdependence or reliance on irrelevant/invisible systems and structures), and myth of meritocracy (i.e., if you work hard you can make it regardless of your circumstances).

Jones also laid out strategies for achieving health equity that she summarized with two major components: 1) change the opportunity structures (e.g., modify systems/structures/mechanisms, break down barriers to opportunities); 2) value all people equally (e.g., experience our common humanity, embrace all children as our children, transform how we raise our children). “Once you know, you are equipped to change things,” she said.

To get started, she encouraged community organizations, academic departments, and other groups to work together (like the partnerships fostered by the Institute for Partnerships to Eliminate Health Disparities that brought about the Clyburn Lecture) to combat various aspects of racism, which once addressed will improve social determinants of equity. By addressing social determinants of equity, we are addressing social determinants of health, which will reduce and then eliminate health disparities. For ideas, she suggests reviewing the concluding observations put forth in the U.S. Government Periodic International Convention on the Elimination of All Forms of Racial Discrimination Report to the United Nations.

Regardless of each person’s occupation or group identification, Jones believes that every person can be a concerned and engaged citizen who contributes to the effort of ending racism. And once we do this, she adds, we can learn from this progress and apply these lessons to addressing all forms of discrimination and inequity (e.g., race, gender, labor roles, disability, sexual orientation, religion, etc.). This will help us achieve social equity/justice and eliminate health disparities for all. Her final challenge to the audience was for each of us to be actively anti-racist by naming racism, asking others to join you, and then organizing and strategizing together to disassemble and dismantle the ways in which racism operates.

...for some reason to this day…when the subject of race comes up, people just stop talking. To think that we are going to solve this problem by wishing it away—that’s not going to solve the problem, no matter what our wishes might be.

After Jones concluded her presentation, Congressman Clyburn spoke. He told a story about a conversation he had in 1966 with a woman who had some advice about how to solve the problem of racism—by talking about it. She told Representative Clyburn that she believed he would be in a position during his career to do something about race. She asked him to promise that when the subject came up, he wouldn’t stop talking. “That stayed with me…because for some reason to this day…when the subject of race comes up, people just stop talking,” Congressman Clyburn said. “To think that we are going to solve this problem by wishing it away—that’s not going to solve the problem, no matter what our wishes might be.”

He then thanked Jones for giving us the tools and showing us the way through her presentation. “We’ve had this lecture eight times before and they were always good, but none of them have been more challenging than what we’ve heard here today, and I want to thank you for doing that,” he said. 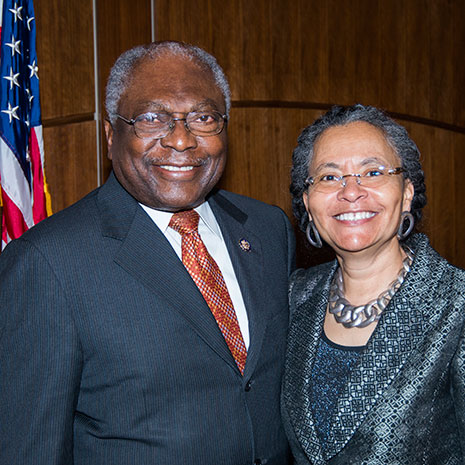 Given the will, what is the way?

APHA President Camara Jones captivated a full house at the 9th Annual Clyburn Lecture on April 1 with her illuminating, motivating and action-oriented discussion on health disparities and racism.