I Am Public Health: Alyssa Davis

Whenever she wasn’t at school or playing sports as a kid, Alyssa Davis was at Strong Memorial Hospital near her family’s home in Rochester, N.Y. Her mother, a clinical social worker at the hospital, exposed her children to the healthcare system at a young age. “I have long been interested in opportunities that improve provider access and public health promotion and education,” Davis says.

Around the time she moved to Fort Mill, S.C. just before high school, Davis discovered another passion: chemistry. “I immersed myself with books of every scientific caliber to find a facet of the field that not only intrigued me, but fit into an opportunity which meshed with healthcare,” she says. “I eventually stumbled upon pharmacy.”

I have long been interested in opportunities which improve provider access and public health promotion and education.

Davis was hooked on the University of South Carolina after her first visit. “I immediately fell in love with its history and realized there was no other university for me,” she says. “There is something truly breathtaking about seeing the campus horseshoe for the first time!”

After majoring in Pre-Pharmacy (Biology) for just two years, Davis moved straight into the College of Pharmacy’s doctoral program in 2012. Once she began her clinical and professional experiences through the program, her career goals became more refined. “I was exposed to a calamity of health care problems needing innovation,” Davis explains. “The amount of poor provider access, especially in my beloved state of South Carolina, was shocking.”

With the then newly created Doctor of Pharmacy/Master of Public Health (PharmD/MPH) Dual Degree Program enrolling its first students, she saw her opportunity to “begin a voyage on the road less traveled.” Since then, Davis has pursued opportunities to integrate her pharmacy and public health interests even further.

Several of her projects and extracurricular activities have focused on the transition of pharmacists into public health figures within their communities. For example, as a result of recent legislation expanding pharmacist-delivered immunizations in S.C., Davis worked to improve the education delivered to her patients and peers regarding vaccines. “I have also found myself digging into antibiotic stewardship practices at the public health level,” she says. “I’m hoping to work at state level someday to improve antibiotic practices and minimize antimicrobial resistance.”

The last thing you want to do is find out that your career choice lacks in the ability to make you happy, so speak to your teachers, to your peers, and to that random name and email you found on a website for the place you want to work someday.

Despite working on two full-time graduate degrees, Davis still found time to develop her service and leadership skills. She has served as president of the Student National Pharmaceutical Association, a student organization aimed at “serving the underserved.” She won two Regional and National Competitions from the same organization in 2014. Through her own initiative, Davis also managed to intern at a hospital in Gibraltar where she has family.

To complete the practicum requirement for the MPH degree, she worked with the Dorn Veterans Hospital on the 2015 Operation Homefront initiative and interned at Catawba Service Unit of the Indian Health Service in Rock Hill. “With both sites, I was able to work directly with the patient population and learn the impact of community and federal programs established to improve their health outcomes,” she says. “For instance, with Operation Homefront, I help put together a day-long event, which provided numerous services to homeless veterans in Richland County, including same-day housing placement or VA enrollment.”

At the College of Pharmacy, Davis worked with a number of faculty members on original research. One of those mentors stands out in particular: Assistant Dean Amy Grant. “Dr. Grant is one of the hardest working, impressive and determined individuals I’ve ever met, and she really helped to mold me into the student I am today,” says Davis. “When I decided to enroll in the MPH program, she didn’t tell me I was crazy for picking up another degree to add on to my already insane schedule; instead, she helped me make a plan.”

Now at the end of both of her programs [She graduated in May with a PharmD degree (pictured above with Pharmacy's Interim Executive Dean Rowen and Dr. Grant) and will quickly follow that graduation with a second in August for her MPH], Davis will work in North and South Carolina as a community pharmacist with plans to work with the state government or state board of pharmacy to improve public health programs in a variety of areas. She also has some advice to dispense.

“Too often I find my peers academically driven to such an extent that they forget to actually experience their programs and explore the many possibilities that accompany them,” Davis says. “The last thing you want to do is find out that your career choice lacks in the ability to make you happy, so speak to your teachers, to your peers, and to that random name and email you found on a website for the place you want to work someday. Nine times out of ten, they’ll become a source for answers or even mentors. Lastly, NEVER underestimate the power of a handwritten letter and thank you note.” 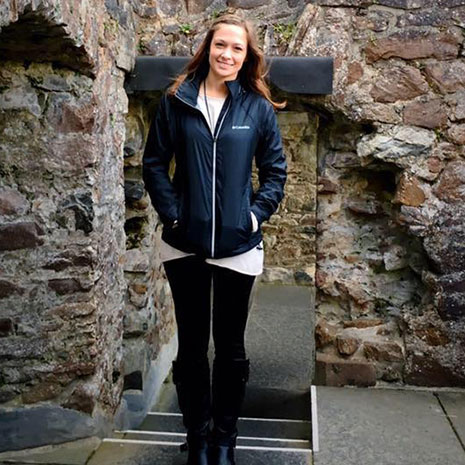