The scientists at the University of South Carolina’s SmartState Center for Environmental Nanoscience and Risk (CENR) in the Arnold School of Public Health have one overarching goal: to harness the benefits of nanoparticles while minimizing possible side effects. Researchers at CENR, which is located within the Department of Environmental Health Sciences, are always working on multiple research angles to benefit environmental and human health through the strategic use of nanoparticles. For example, they have developed a revolutionary method for cleaning up oil pollution in water and soil using nanoparticles that reduces oil toxicity by almost 100 percent and is far simpler and much less expensive (80-90 percent reduction in costs) compared to current oil remediation methods.

Another project involves using nanoparticles to understand the fundamental mechanisms of uptake into cells or organisms and toxicity under various conditions. They are working to learn more about how a nanoparticle enters a cell directly as a particle and under what conditions it breaks down (or dissolves, much like salt does in water) and the dissolved elements (ions) enter the cells of a plant or animal.

Using silver nanoparticles as an example, the team developed isotopically* labeled three-layer nanohybrids with a silver core (Ag107), an insoluble gold layer around the core, and then a soluble outer layer of silver (Ag109). The chemistry and biology of these isotopes are identical but they can be distinguished using a specialized piece of equipment called a single particle inductively coupled plasma mass spectrometer (SP-ICP-MS). The outer layer of silver nanoparticles partly dissolves into the surrounding environment while the insoluble gold prevents dissolution of the silver core. The researchers then measure the Ag107 to Ag109 ratio to separate the direct and indirect uptake mechanisms. This approach allows them to assess the different paths to uptake of the silver into the food chain to learn more about how and why certain types of particles enter the food chain (e.g., water→algae→oysters→mammals/humans) and at what concentrations.

Employing a variety of state-of-the-art methods, the team is able to determine the amount and nature of silver present in a particular stage of the food chain by analyzing the composition of the nanohybrid particles (i.e., Has it dissolved? How much?). The SP-ICP-MS is manufactured by PerkinElmer®, who has been a critical research partner in developing new methods for the instrument. CENR has published their success with this approach in Talanta and NanoImpact. They have also published several application notes with PerkinElmer and have a patent pending in this area.

“The detailed work has taken several years to perfect and is at a stage now where we can use the nanoparticles as probes in real systems,” say Ruth Merrifield, CENR Research Assistant Professor and first author on the paper. “We are now applying these methods to investigate how nanoaprticles might enter the human food chain and affect human health and environmental health”

The novel method allows the researchers to follow the nanoparticles uptake and changes throughout the food chain and learn more about when certain nanoparticles are taken up, thereby identifying when and where toxicity occurs. “There are thousands of products that are thought to contain various types of nanoparticles and given the scale of the research and development many more on the way,” says CENR Director and SmartState Endowed Chair Jamie Lead, who directs this line of research. “By learning more about these fundamental mechanisms behind toxicity, we can help to better design particles and materials that are less toxic. The work done by Dr. Merrifield, along with doctoral students Shelby Butz and Sahar Pourhoseini, is exemplary and is providing important fundamental knowledge which will have importance to regulators and to industry.”

Most elements, such as carbon, oxygen and silver, are composed of different isotopes, but what are isotopes? Thinking back to your chemistry classes in school, all atoms are made of protons, neutrons and electrons. The number of protons decides the element, and each atom has the same number of electrons (e.g. carbon has 6 protons and 6 electrons). The electron number can change during chemical reactions, but it’s still the same element. However, an element might have different numbers of neutrons, giving it a different mass (or weight). So most carbon is carbon-12, with 6 of each, but radioactive carbon is carbon-14, with 8 neutrons and is used for carbon dating. Silver has two isotopes with masses of 107 and 109. The isotopes behave in exactly the same way chemically (they’re the same element) but can be measured separately by using a method called mass spectroscopy. CENR has made nanoparticles (materials between 1 and 100 nm; about 100,000 times smaller than the width of a human hair), which have three layers of silver-109, Au and silver-107--similar to the structure of the earth or to layers in Gobstopper candy. These nanoparticles can then be used to measure fundamental processes that nanoparticles undergo in the environment, since the layers of silver behave as all silver does but can be separately measured. As they are separated by gold, the inner layer is always a particle. However, the outer layer dissolves as salt does. 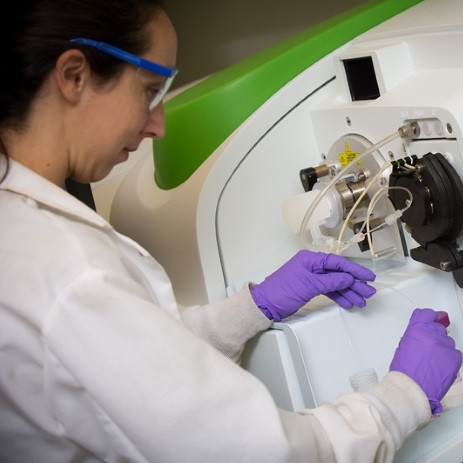 CENR researchers, including Research Assistant Professor Ruth Merrifield (shown above), are using nanoparticles to understand the fundamental mechanisms of uptake into cells or organisms and toxicity under various conditions.