Ron and Sue Yarab’s commitment to Carolina has No Limits. The high school sweethearts might live in Youngstown, Ohio where they grew up, but they have stayed connected with their alma mater and the Department of Exercise Science after graduating from the Arnold School of Public Health (then known as the College of Health) in 1985.

Ron, who returned to UofSC to complete a Medical Degree, is a physical medicine specialist. Sue is a physical therapist. They continue to impact public health every day through their physical medicine specialty clinic, All Points Medicine Rehabilitation, as well as through their fundraising and volunteer efforts for the Children’s Tumor Foundation and RaceDayFoundation. As Torchbearer Society Endowment Fund donors and guest speakers, the Yarabs are also advancing the future of public health with their support of exercise science students, faculty and programs.

Ron was recruited by UofSC for both track and football. He decided to focus on track and field (shot put, discus, javelin), earning both conference and national honors in his events. He held multiple University records, including best shot put throw, a mark that held for 25 years (1981-2006). Ron was also named 1985 University of South Carolina Student Athlete of the Year and Metro Conference Student Athlete of the Year. Sue (maiden name: Petty) secured a highly competitive spot dancing with the Carolina Coquettes. As a Coquette, she performed with the Carolina Band in a variety of styles from jazz to high kick.

Sue and Ron were some of my first students when I came to USC almost 35 years ago, and I’ve enjoyed staying in touch with them over the years. They were both very smart, and even back then you could see they were a great team.

It was a time of change for the Department of Physical Education where the Yarabs were earning their degrees. A critical mass of faculty members was developing an exercise science division that would soon become its own department with pre-professional degree programs. The emerging discipline was a natural fit for the two athletes who wanted to study medicine and physical therapy after graduation.

The exercise science division, and particularly the people behind it, surpassed the Yarabs’ expectations. “The department was already great at that time and gaining an impressive reputation,” says Ron as they recall studying with Professors Larry Durstine, Mark Davis, Harriett Williams, Russell Pate and others. “It was nice to be a part of the initial stages of the program, and as students, we were invited to provide input into the design.”

“Anything we needed, the faculty were there for us,” Sue adds.

“Sue and Ron were some of my first students when I came to USC almost 35 years ago, and I’ve enjoyed staying in touch with them over the years,” says Durstine. “They were both very smart, and even back then you could see they were a great team.”

The Yarabs valued their close interactions with faculty members, realizing this environment was unique among undergraduate programs. “That was the great thing about exercise science—you got to interact with the researchers,” says Ron. “The more interest you showed, the more you got out of it.”

That was the great thing about exercise science—you got to interact with the researchers. The more interest you showed, the more you got out of it.

As a young researcher in Durstine’s lab, Ron exhibited ingenuity in establishing a new line of inquiry that continued long after his graduation and foreshadowed the innovative mindset he would bring to his future work as a physician. While many scientists were focusing on aerobic activity as a means for improving HDL cholesterol levels, which serve as indicators for risk of heart disease, Ron was thinking outside the box.

The National Junior Olympic Weightlifting Champion drew from his athletic training and hypothesized that strength training activities, such as weight lifting, could also have a positive impact on HDL cholesterol levels. He was right.

“Ron got in the lab and quickly became proficient in the techniques, and then he was coming up with his own research ideas based on his experience as an athlete,” says Durstine. “Ron’s work was part of a line of research that lasted two decades and resulted in more than 20 scientific publications. His work was an important piece of the puzzle in looking at physical activity and exercise—particularly when looking at the impact of a single exercise session—in determining that different exercise volume thresholds do exist for blood lipid and lipoprotein change, especially for HDL cholesterol levels.”

Though they didn’t want to leave USC, the Yarabs moved to Charleston after their 1985 graduation and wedding so that Sue could study physical therapy and Ron could begin his medical degree—both at the Medical University of South Carolina. Two years later, they moved back to Columbia where Sue worked as a physical therapist for Richland Memorial Hospital and Ron transferred to USC’s School of Medicine to complete his MD.

Find that niche market that you can cultivate and grow. At the same time, you have to be willing to continue changing to keep up with new research and stay motivated. If you’re going to do something, be the best at it.

The couple then returned to Ohio so that Ron could begin his residency in physical medicine and rehabilitation at The Ohio State University. Meanwhile, Sue continued working as a physical therapist and completed an Advanced Master’s in Orthopedic Physical Therapy at the University of Indianapolis. Soon after, a family illness brought them back to Youngstown.

After briefly working at a local hospital, Ron opened a practice for physical medicine rehabilitation. Sue served as the rehabilitation director at a senior care facility.

Recognizing the potential in their complementary specialties, they established All Points together in 1993—which has grown to include two locations (Columbiana and Poland, Ohio). Sue is the Director of Rehabilitation and Physical Therapy and specializes in geriatric orthopedic physical therapy. She also has advanced training in Stott Pilates, which she puts to use at the two Pilates Reformer Studios the Yarabs opened.

Ron specializes in treating musculoskeletal and neuromuscular illnesses and injuries. Building on the innovative outlook he established more than three decades ago as an undergraduate researcher, he compares his practice to detective work—discovering root causes using methods such as electrodiagnosis and employing cutting-edge treatments (e.g., PRP and stem cell injections) for patients, many of whom have lost hope of diagnosis or relief from their ailments.

One example of the pioneering services offered by All Points demonstrates the Yarabs’ inventive perspective coupled with their broader vision for impacting public health. Rather than recommending knee/shoulder/elbow surgery for an 85-year-old patient who would be at-risk, or perhaps ineligible, for such a procedure, they can offer stem cell injections. Using the patient’s harvested stem cells and then re-injecting them, the patient experiences a quicker and easier recovery without the risks of surgery.

We consider it paying it forward. We really like to give back however we can with whatever they need.

“By decreasing disability, we can reduce the cost and toll that more traditional treatments entail—making a major impact on public health,” says Ron, who predicts that knee replacement could be obsolete in the not-so-distant future. “Stem cells have also shown antiaging and regenerative properties, which is an important consideration as the older adult population grows.”  Ron had his own stem cell treatment for a torn meniscus last year and went from procedure to triathlon in just a few months.

Innovative thinking and the willingness to take calculated risks are mindsets that the Yarabs recommend to current and prospective exercise science students as well as alumni. “Find that niche market that you can cultivate and grow,” says Ron. “At the same time, you have to be willing to continue changing to keep up with new research and stay motivated. If you’re going to do something, be the best at it.”

“You really have to love it,” adds Sue. “So pick something you really enjoy.”

It’s that love for their discipline and the value they place on its advances that led the Yarabs to stay connected with the Arnold School and the exercise science department. In addition to serving as guest lecturers on health professions, their $25,000 gift helped establish The Torchbearers Society Endowment Fund in 2012, which helps support student scholarships and fellowships, faculty professorships and stipends and provides general support for the Department of Exercise Science.

“We consider it paying it forward,” says Sue of their own hard work to earn their degrees—which they pieced together through scholarships and part-time jobs. “We really like to give back however we can with whatever they need,” adds Ron.

Another benefit of staying in touch is that they stay updated on the department’s latest research. “Their research mirrors what we do, and we apply this research in our practice,” Ron says. “It helps us get the most out of what we can do for our patients.”

It’s a relationship built on mutual respect and admiration that began more than 30 years ago and continues to grow. 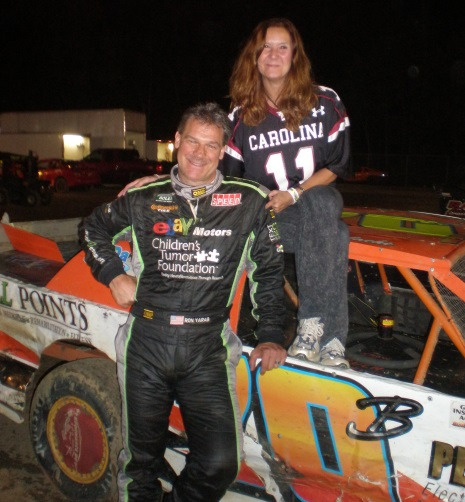 Outside their clinical practice, the Yarabs stay physically active and are lifelong Gamecocks fans. As a semi-professional race car driver in the Rolex Grand-AM Sportscar Series, Ron has helped raise $1.4 million in three years for the Children’s Tumor Foundation. Ron is presently on the Advisory Board for the new charitable organization RaceDayFoundation.org which provides raceday experiences to children and families living with life-threatening illness. Sue organizes his racing schedule and volunteers for the Children’s Tumor Foundation and RaceDayFoundation.