Larry Durstine, Distinguished Professor in the Arnold School’s Department of Exercise Science (EXSC), has been elected to membership as an Active Fellow in the National Academy of Kinesiology (NAK), due to his contributions to scholarship and leadership in the field. Durstine was recognized at the Academy’s 2016 annual meeting in Albuquerque, N.M.  As one of the organization’s highest honors, NAK fellowship reinforces the inductees’ commitment to exercise science, kinesiology, and public health—a commitment that for Durstine has never wavered.

Growing up in rural Ohio, Durstine’s family taught him the satisfaction of working hard and giving to others from a young age while living on their family farm. “I was brought up from childhood to always work hard, do the best possible work, and to always help the person next to you,” he says. “I have taught my children and now my grandchildren the same ideals.”

It’s a charge he has taken quite seriously throughout his 35-year career as an exercise science scientist, mentor, and teacher. What Durstine didn’t expect was all that he would receive in return.

Though he originally had his sights set on being a high school teacher and coach, Durstine’s career goals shifted as he completed a bachelor’s degree in physical education at Malone College. He continued with his education (MA in Physical Education, University of Denver; Ph.D. in Physical Education/Exercise Science, University of Toledo) as he gradually realized that he wanted to be a scientist.

“The doors that I wanted to open in coaching never opened, but the doors in research and chronic diseases and public health did open,” says Durstine of the career reflections he often shares with students. “There are a lot of doors that open, you look through them, and sometimes you go through and sometimes you don’t. I kept going through clinical exercise programming and ultimately public health.”

During his doctoral program, Durstine became involved with primary and secondary disease prevention/treatment with fitness and cardiac rehabilitation programming for individuals who had experienced cardiovascular disease and had heart attacks and/or open heart surgery. He also was mentored by leading experts in the field, such as Michael Pollock, Peter Raven, Larry Gettman, and Ken Cooper. “It was while working with these leaders that I really began to think about the connection between exercise and chronic disease management,” says Durstine. His research also focused on the relationship between physical activity, exercise, blood lipid/lipoproteins, and disease.

It doesn’t matter what you have, exercise is good for you and will help prevent, delay, or alleviate chronic diseases.

Durstine brought his growing expertise with him to the University of South Carolina in 1982 as an assistant professor and director of cardiac rehabilitation. There was already a strong group of exercise science researchers here at the university which included colleagues such as Professor Russell Pate, who happened to interview Durstine for his faculty appointment.

A few years later, Durstine collaborated with the American College of Sports Medicine and other leading scientists to write a book titled Exercise Management for Persons with Chronic Diseases and Disabilities. “At the time, we had good reason to believe that there were 25-30 diseases could be positively affected by exercise,” Durstine says. The fourth edition of the book was published in 2016, and it included nearly 60 diseases (e.g., diabetes, liver disease, muscular dystrophy, various types of cancer) that have been scientifically shown to benefit from physical activity and exercise. “It doesn’t matter what you have, exercise is good for you and will help prevent, delay, or alleviate chronic diseases,” Durstine says of the linkages he and other scientists have found over the past 2-3 decades.

Though he’s perhaps best known for his scientific research and scholarship (e.g., 9 books, 40 book chapters, 85 peer-reviewed papers, multiple citation awards), Durstine has received numerous honors for his teaching and services activities. He received the Arnold School of Public Health Faculty Service (2006) and James A. Keith Excellence in Teaching (2003) Awards as well as the Governor’s Distinguished Professor Award (2005) and University of South Carolina’s Michael J. Mungo Distinguished Professor Award and the Ada B Thomas Outstanding Advisor Award—just to name a few.

One of the most exciting aspects about working in a department like ours is the friendships here in the department —and those friendships that extend beyond Exercise Science to the Arnold School and the entire University.

In addition to mentoring countless graduate students on committees or in the classroom or laboratory, Durstine led the EXSC department as chair (2000-2014) to become nationally recognized in the field of exercise and kinesiology. He has served in numerous positions (e.g., President, Vice President, Treasurer, Board of Trustees) for the world’s foremost exercise science-related organization the American College of Sports Medicine, and as an associate editor for several scientific journals. Durstine has also contributed to regional-and state-level programs and chapters, such as the establishment of the S.C. chapter of the Cardiac Rehabilitation Association and the development of cardiac and pulmonary rehabilitation certification programs within the state.

“As an undergraduate and even as a doctoral student, it never occurred to me that I would be engaged in these types of activities during my career,” says Durstine. But as those doors opened, he walked right through them.

Durstine’s resulting contributions to research, education/mentorship and service led to his many awards, including his most recent NAK election to Active Fellow status. And to his surprise, the more he gave, the more he received.

“I was always taught to give—I never worried about receiving but received anyway,” says Durstine of the support and comradery he has experienced throughout his career at Carolina. “One of the most exciting aspects about working in a department like ours is the friendships here in the department —and those friendships that extend beyond Exercise Science to the Arnold School and the entire University.” 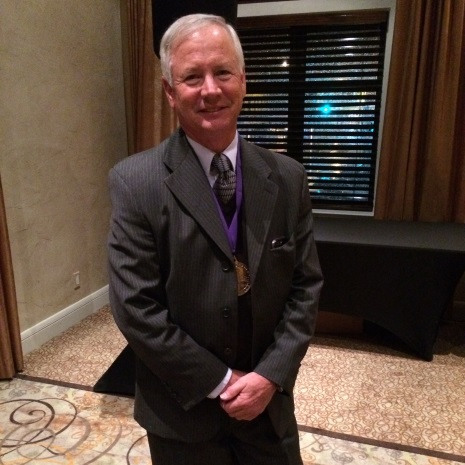 Distinguished Professor of Exercise Science Larry Durstine was inducted as an Active Fellow of the National Academy of Kinesiology at the organization's 2016 Annual Meeting in Albuquerque, N.M. (pictured above: first row, second from the right).