Originally from Greenwood, South Carolina, Middleton graduated with a bachelor’s degree in exercise science from the Arnold School in 2010. The School was already great fit and offered an excellent MHA program, so he made the transition to the health services policy and management department for his master’s degree.

While pursuing his MHA degree, Middleton was selected to join the United States Navy Health Services Collegiate Program. After completion of officer training, he spent the next two years at the U.S. Naval Hospital in Cuba and then another two years at the Naval Hospital Bremerton in Washington. He is currently stationed at Camp Lejeune, North Carolina, serving with the 26th Marine Expeditionary Unit.

“In my current role I develop medical support plans for the Marines I serve with,” says Middleton, who plans all health-related aspects for overseas operations. “It is my job to understand all the preventive medicine considerations—weather, potable water, poisonous plants and animals, etc.—in that particular country and develop casualty evacuation plans to get injured Marines to the appropriate echelon of care to minimize the effects of the injury.”

When the 26th Marine Expeditionary Unit is not deployed, they might be found assuming the Defense Support to Civil Authorities mission by supporting disaster relief efforts along the eastern coast of North and South America—usually in the wake of hurricanes.

“Our unit was first tasked to provide disaster relief in Texas for Hurricane Harvey, then at the U.S. Virgin Islands for Hurricane Irma, and finally in Puerto Rico for Hurricane Maria,” says Middleton, whose team provided supplies, water and  transportation to thousands of displaced citizens. “I led teams in completing thorough assessments of the 75 hospitals on Puerto Rico and the U.S. Virgin Islands. We also conducted medical evacuations from hospitals without power to higher echelons of care and developed resource allocation plans to allow for hospitals to maintain or begin operations.”

The human element exists in every workplace, whether it be on the battlefield our behind a desk.

Every day, Middleton utilizes the knowledge and skills he gained through his MHA program. “Process Improvement is emphasized in all that I rely on my staff to execute,” he says. “If we are doing things that are not adding value to patient outcomes, we will no longer do it.”

He particularly remembers the influence of clinical assistant professor Michael Byrd, who was serving as the MHA program director at the time and taught Middleton a course on organizational behavior. “I learned the most valuable information in this class, specifically lessons on intrinsic and extrinsic motivation,” Middleton says. “He continued to provide sound mentorship throughout my time in the program and in the early years of my career.”

He was also inspired by department administrative coordinator Debra Brown and then-staff member Taylor Mitchell. “Every day these two individuals were professional and positive despite anything that may have been going on around them,” he says. “This lesson I still carry.”

Other lessons he’s learned throughout his education and career include attacking your weaknesses by facing them head on, keeping your eyes on the prize by focusing on the mission, and choosing something you’re passionate about because passion drives performance. He also reminds public health students and professionals to never, ever forget about the people.

“We are nothing without the people we work with and work for,” says Middleton. “The human element exists in every workplace, whether it be on the battlefield our behind a desk.”

For Middleton, one of the most important people is his wife, Shealyn Middleton, who has seen him through his education and multiple appointments as a U.S. Navy Officer. “She is the motor that keeps my family moving, and my number one supporter. Without her, I wouldn’t be able to serve the people I have been fortunate to serve.” 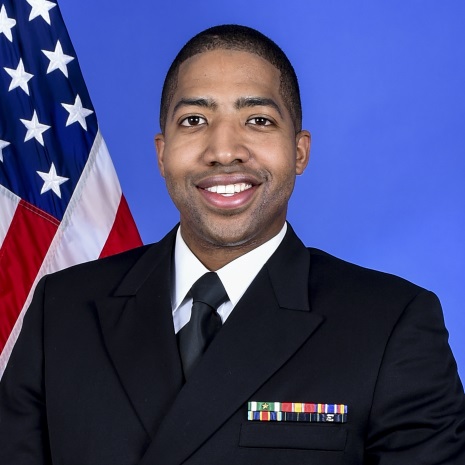 Lieutenant Larry Middleton is a graduate of the Arnold School's exercise science (B.S.) and master of health administration programs.