California native Matthew Yuen is well on his way to becoming a rural health expert. The health services policy and management (HSPM) doctoral candidate has been building his expertise in the field since he began his master’s degree program at Texas A&M University where he first began working with rural populations.

Since he joined the Arnold School in 2014, Yuen has had opportunities to work with mentors Janice Probst (HSPM) and Kevin Bennett (School of Medicine). He’s also gained experience at the South Carolina Rural Health Research Center.

This year marks the second year that Yuen has won the Outstanding Student Abstract Award from the South Carolina Institute of Medicine and Public Health. It’s the third year in a row for a HSPM student (following Naveed Sadiq’s win in 2015) and the fifth year in a row for an Arnold School student to win the award.

Last year, Yuen won the award for his abstract, Who Said What: Complaints Leading to Opioid Prescriptions in the ED (emergency departments). This research looked at a three-year sample of emergency department visits made by adult patients and found trends in opioid prescriptions. Opioids were more likely to be prescribed during the following situations: individuals who are a) 36-50 years of age with b) private insurance at c) urban locations with d) complaints of injury, abdominal pain, or back pain.

This year, Yuen won the award for the abstract titled, What makes a healthcare tweet successful: a quantitative analysis. For this project, Yuen teamed up with another researcher, Nida Ali, whom he met during his master’s program. The team sought to understand what made Twitter healthcare tweets successful, aside from the actual content itself. They looked at more than 300,000 tweets from 174 organizations from around the country and analyzed them on various factors based on which tweets received the most likes and retweets.

The researchers found that successful healthcare tweeting occurred during the weekends and Wednesdays after dinner. Further, optimal tweets used 100-120 characters consisting of 25-24 words with 1-3 different hashtags.

“This study essentially puts a number on what an ‘opportune moment’ is—in this case, weekends and Wednesdays after dinner,” says Yuen. “We also confirmed that you want your healthcare tweets to be simple to understand and not too long, but not too short either.” As an extension of this research, Yuen and Ali are currently conducting a quantitative analysis on the content of the tweets.

The Outstanding Student Abstract award is presented at one of the South Carolina Public Health Association’s annual meetings and has been sponsored by the South Carolina Institute for Medicine and Public Health since 2011. “Matt is an exceptional student and young professional,” says Megan Weis, associate director for outreach and development for the Institute. “The consistent high quality of his work, around differing topics, is impressive and speaks to his versatility in research. I’m looking forward to following his career and future work!”

In addition to wrapping up his doctorate this summer, Yuen has two additional reasons to celebrate. In July, he will move to the Baltimore area to begin his new role as Senior Scientist at Translational Technologies International. That same month, he will also marry his best friend and fiancé, Ashley Purvis, who supported Yuen throughout his three-year doctoral program. Yuen is also grateful for the support and encouragement his parents, Ting and Wendy, have provided throughout his program. 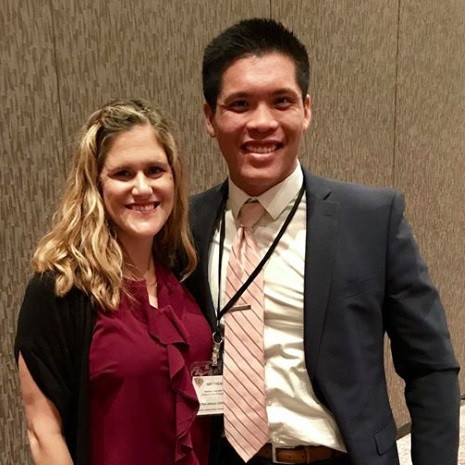