It was during high school, in Cary, N.C., that Allissa Desloge first made the connection between the media, government, and societal roles and health outcomes, such as chronic diseases and obesity. She had already fallen in love with UofSC’s campus, but it was her invitation to join the Capstone Scholars Program that confirmed her collegiate choice. Now to pick a major...

“When I read the description of what a public health major entailed, I knew it was for me,” Desloge says of the easy decision. But selecting a focus within the field was a bit harder. Then, during her freshman University 101 class, she watched a documentary about some women who were advocating for improvements to school lunches, food stamps, and the cost of healthy foods.

“These women made changes by going to Washington D.C. and advocating for advancements in these issues,” she says. “The documentary discussed how policy changes could improve these problems, and since then I have had a strong interest in policy and advocacy—making a point of choosing political science as one of my cognates, so I could learn more about policy development and its impacts.”

Later that same year, Desloge put her Spanish minor and public health major to good use when she traveled to Nicaragua on a medical mission trip with Capstone Scholars over spring break. “I could write a novel on how amazing this experience was and how it impacted me as a person,” says Desloge, who also spent a summer in Spain through Carolina’s Study Abroad Office. “Being able to see how different healthcare is in a developing country really peaked my interests in global health as well.”

When looking at prospective graduate programs, it was important to Desloge that she have the opportunity to study both health policy and global health. After achieving a 100 percent acceptance rate into the schools to which she applied (e.g., Emory University, Yale University, George Washington University, Boston University, Saint Louis University, University of South Carolina), Desloge decided to get out of her comfort zone—choosing to begin a Master of Public Health in Health Policy degree at Yale University this fall.

Long-term, she plans to work as a policy analyst to effect changes in access to healthcare and healthy lifestyles. Ideally, she’d do this at an agency like the World Health Organization or the Centers for Disease Control and Prevention. A career in policy development and advocacy with the American Cancer Society or Feeding America would be equally appealing to the Capstone Fellow.

How did Desloge get off to such a great start on this career path? In addition to maintaining a 4.0 GPA throughout her time at UofSC, the Woodrow Scholars Award recipient has excelled outside of the classroom too—and she’s managed to keep it largely in the public health arena.

As a Changing Carolina Peer Leader, Desloge presented on the topics of physical activity, nutrition, mental wellness/stress, sexual wellness, and sexual assault violence intervention and prevention in the same class that steered her toward health policy when she was a freshman: University 101. This past year, she was matched with the Women’s Rights and Empowerment Network when she became a Community Service Ambassador.

“WREN is a South Carolina-based network that aims to improve the health, economic well-being, and rights of South Carolina’s women, girls, and their families through advocacy, education, and empowerment,” Desloge explains. “Volunteering at a non-profit that focused on health policy development solidified that health policy was what I wanted to study in graduate school.”

The 2017 Who’s Who Honoree also served as a research assistant in the psychology department with Assistant Professor Elma Lorenzo-Blanco. Lorenzo-Blanco is working on a project that focuses on mental health and substance abuse behaviors among Latino adolescents in the local community, and Desloge contributed to the literature reviews and surveys prior to obtaining IRB approval.

Other scholarship endeavors include the two posters she presented at Discover USC 2017. One poster, which won first place, focused on her WREN experience for Graduation with Leadership Distinction in Diversity and Social Advocacy. The second touted the importance of corporate wellness, based on an internship Desloge held in 2015, and met the requirements for Graduation with Leadership Distinction in Professional and Civic Engagement.

Even Desloge’s philanthropic work through her sorority (Alpha Gamma Delta) has a health focus. “We engage in diabetes education, research, and awareness, which has broadened my knowledge on the disease and increased my interest in chronic diseases,” she says. Desloge also serves as an ambassador for the Public Health Society, recruiting members and managing social media.

Naturally, Desloge’s advice to future and current students is to get experience. “Not only will different experiences help you figure out what areas of public health you do and do not like, it will really make your graduate school application stand out,” she says. “After completing my internship in corporate wellness and volunteering at a non-profit, I realized that I preferred the non-profit sector. In addition, my passion for food security, access to healthcare, and chronic diseases developed because of the volunteer work I did while I was in college. On the applications side…I talked to a lot of admissions counselors from different schools and they all preferred a variety of meaningful experiences over a perfect GPA or GRE score.”

Desloge has also benefited from a number of influential mentors. Christine Palmer served as Desloge’s advisor and instructor. “Ms. Palmer has played a crucial part in helping me become the student I am today,” she says. “Her guidance, encouragement, and knowledge of the field have been imperative to my success.”

As she departs UofSC for graduate school this year, Desloge leaves a legacy that is hard to match but likely serves as an inspiration for others who wish to pursue careers in public health. Work hard and gain experience inside—and outside—the classroom. 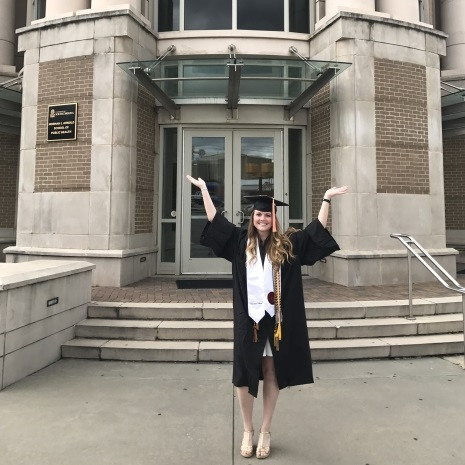 Allissa Desloge graduated this May with a bachelor's degree in public health. She will begin a Master of Public Health in Health Policy program at Yale University this fall.