Choosing UofSC for his undergraduate degree was a no-brainer for Derek Liuzzo. “The atmosphere, the facilities, and the exercise science program were a huge draw,” says the Sumter native. At the time, he had no idea he would be a student at Carolina for 13 years, but he has three degrees to show for it and absolutely no regrets.

Liuzzo had always been interested in the health/medical field, but wasn’t sure what shape his career would take. Then he sprained his ankle during a high school football game and began physical therapy. “I was hooked,” Liuzzo says simply. “The amount of thought that went into every diagnosis and treatment was incredible, and they got to move around and really get to know their patients.”

After learning about the Arnold School’s B.S. in Exercise Science program, he knew that an exercise science degree was his best route to becoming a physical therapist. “Looking back, I realize that the exercise science program is the best path for anyone interested in the medical field,” says Liuzzo. “The program teaches all the science, but it also teaches you how to think.”

Looking back, I realize that the exercise science program is the best path for anyone interested in the medical field.

One class stands out in particular. “Dr. Larry Durstine’s class was inspiring,” says Liuzzo. “Not because of the material, but how he taught. He was excited every day to be there and that you were there to learn it. He taught me a lot about what I wanted to be in a professor. He became a great mentor and friend of mine who I will always ask advice and keep in touch with.”

As an undergrad, Liuzzo also had the opportunity to serve as the equipment manager for the Gamecocks baseball team under then-Coach Ray Tanner. His three years with the team bolstered his love for rehabilitation as he saw players fight their way back from injuries and illnesses. Working with the Athletic Training program, also housed within the exercise science department, fostered his appreciation of interprofessional collaboration.

Staying in the Department of Exercise Science for physical therapy school was another easy choice. The faculty and class size were the biggest draws for Liuzzo. “Learning from this faculty was the best experience,” he says. “Not only were they knowledgeable, but they cared about me as a future clinician, researcher, and person.”

The Doctor of Physical Therapy (DPT) program gave Liuzzo the chance to do something he’d been interested in for a while: teach. As a graduate teaching assistant for the School of Medicine’s Gross Anatomy program, he taught a lecture, helped with dissections, and led group and private lessons. “I knew exactly what I wanted,” says Liuzzo. “I wanted to see lightbulbs go off and future physicians and clinicians to finally understand the material and help people.”

“I knew exactly what I wanted. I wanted to see lightbulbs go off and future physicians and clinicians to finally understand the material and help people.

During his final year of the DPT program, Liuzzo made his third and final easy decision. Spurred by his passion for teaching, he applied to his department’s accelerated Ph.D. in Exercise Science program (No. 1 in the U.S.). He would also develop his love of research during this program as well.

With the overlap between the complementary DPT and Ph.D. programs, Liuzzo was able to continue working with many of the same mentors, including Clinical Professor Paul Beattie and DPT Director and Associate Professor Stacy Fritz. “Dr. Beattie taught me everything I needed to know about my future as a professor. All of his experience is valuable, and I take it to heart,” says Liuzzo. “Dr. Fritz was my overall mentor. She taught me, literally, how to be a researcher and how to be a mentor. She helped me polish my teaching skills and everything I wanted to be.”

The Norman J. Arnold Doctoral Fellow’s research focuses primarily in older adults and falls. “Many adults suffer a fall, which will lead to injury and possibly death,” says Liuzzo. “Some of these falls occur in the bathroom or while the person is doing two things at once, so my research looks into the characteristics in aging that cause people to lose the ability to multitask efficiently.”

Through his dissertation research, Liuzzo found that chronological age was not the leading factor in the decline of multitasking ability. Instead, variables related to cognition, fear, frequency of multitasking, and balance were more predictive of this decline.

In future studies, Liuzzo plans to examine varying degrees of activity, cognition, and fear to learn more about their impact on multitasking. “If we can quantify that, then maybe we’ll be able to create a screening procedure and help people before a fall ever occurs,” he says.

I will forever be a Gamecock. I may be leaving the university and the state for a new position, but they will always be my family, and I’m proud to say I graduated from the University of South Carolina.

Those future studies will take place at Simmons College in Boston where Liuzzo has accepted a position as an assistant professor in the school’s Department of Physical Therapy. “I couldn’t have asked for a better starting position,” says Liuzzo. “I’ll be co-teaching Gross Anatomy, Neuroanatomy, and Neurological Rehabilitation, and I’ll be helping with the students’ research.”

“Derek has had an impact on many years of DPT graduates, and life at USC DPT will not be the same without him around,” says Fritz. “But he will now have the chance to influence the students at Simmons, and I am sure he will also have a lasting impact there.”

As he makes his first major move in over a decade, Liuzzo looks back on his tenure at Carolina. “My time at USC was valuable for so many reasons,” he says. “The education, the opportunities, the mentors, and the friends were all worth it. The programs I went through were challenging, as they should be, and worth the time and effort. I will forever be a Gamecock. I may be leaving the university and the state for a new position, but they will always be my family, and I’m proud to say I graduated from the University of South Carolina.” 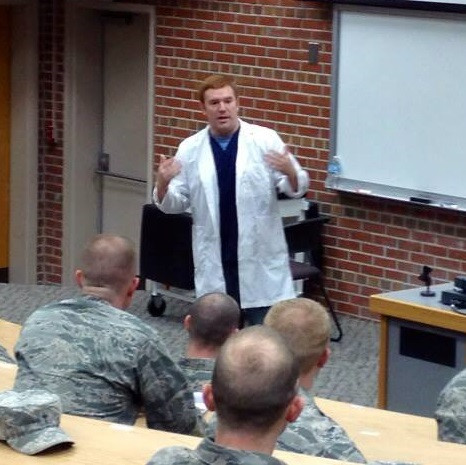 After 13 years at the University of South Carolina and the Arnold School’s Department of Exercise Science, Derek Liuzzo has some advice to dispense. Learn what he has to say to prospective students of the three programs he has listed on his resume.

B.S. in Exercise Science
There are going to be times you wonder, why in the world are they making me take these courses? You will find out when you are with patients. There’s more to patient care than knowing science or medical knowledge. You need to be a well-rounded person to be an exceptional therapist or physician. You never treat the disease: you treat the person.

Doctor of Physical Therapy
Getting into the program is a challenge, and it should be. Take the GRE more than once. Make sure your science GPA is stellar. Once you get in, you are there. Your hardest fight is over. Make friends and use your classmates as resources. You will not be the end all/top notch student all the time. You are learning what you love. Don’t go into this thinking you are going to be a specific therapist. Stay open: you will change your mind multiple times. It’s hard. It’s worth it. You will make the best memories of your life.

Ph.D. in Exercise Science
If you love to teach, want to do research, or both—this is for you. The program is long, and it should be. Find a mentor that reflects not only what you want to research but also someone who is going to push you and help you grow. You will feel like you’re spinning your wheels. You will feel like you are never going to finish. You will end up with a few grey hairs. You will finish, and USC will set you up for success in your career and life.