Kyle McCoil is a well-rounded individual. Just ask Big Brothers Big Sisters of Greater Columbia, or his fraternity, or the UofSC Division of Student Affairs and Academic Support, or his advisors. He’s the sort of person who would be an excellent leader in higher education, which is fortunate because that’s exactly what he plans to do.

As a sophomore, McCoil joined UofSC’s chapter of Sigma Phi Epsilon fraternity, giving him an insider’s view of one of the largest student organizations in higher education: Greek Life. He went on to assume leadership roles both within his chapter (Vice President of Programming, Vice President of Communication, Standards Board) and within the larger context of Greek life (Greek Life Conduct Board). He was recognized for his leadership with an invitation to join UofSC’s Order of Omega.

On campus, McCoil also served as an Orientation Leader, helping welcome over 7,000 students to UofSC during the summer of 2016. He also held the University 101 Peer Leader position, mentoring freshman to help them learn college success strategies.

I was able to connect a lot of things I was learning in class, such as mental health, access to education, determinants to health, and many others, to the field of higher education as well.

These experiences sparked his interest in pursuing a career in higher education and blended perfectly with his public health major and psychology minor. “Through my time as an Orientation Leader, University 101 Peer Leader, and my involvement in Greek Life, I quickly found myself interested in the higher education field,” McCoil says. “I was able to connect a lot of things I was learning in class, such as mental health, access to education, determinants to health, and many others, to the field of higher education as well.”

After losing his brother to suicide nearly a year ago, McCoil is particularly passionate about mental health. Last fall, he participated in homecoming’s Carolina Crowning on the platform of mental health matters and won Mr. Congeniality.

A recipient of Graduation with Leadership Distinction in Professional and Civic Engagement, McCoil earned this honor due to his on-campus activities, but he has also made an impact in the community through his work with Big Brothers Big Sisters of Greater Columbia. McCoil volunteers as a Big Brother in their site-based program and serves as the liaison between the non-profit and his fraternity chapter. The two organizations already had a national partnership established, but McCoil was responsible for connecting the two local chapters.

This semester, McCoil took his commitment to Big Brothers Big Sisters even further by organizing fundraising events to garner financial support. He helped coordinate a spring fundraiser, Bowl for Kids’ Sake. For his senior capstone project, he has designed a philanthropy event for the fall semester that aims to get the UofSC student body involved in raising money for Big Brothers Big Sisters.

The fall semester will also mark the start of McCoil’s post-graduate career. He will begin a master’s degree in higher education and student affairs at the University of Michigan. He plans to focus on student access and success—two areas where he has built an excellent foundation through his UofSC education and extracurricular activities.

Public health is such a large field with so many areas of focus. My biggest piece of advice is to keep as many doors open and try to experience as much as possible.

He also credits his mentors for his preparation. Arnold School Associate Dean for Undergraduate Affairs Sara Corwin taught McCoil’s Introduction to Public Health course and served as his advisor. “Dr. Corwin has been nothing but supportive and encouraging,” McCoil says of the faculty member who helped cultivate his interest in public health.

April Winningham, a public health instructor, also made a major impact on McCoil. “In Dr. Winningham’s class, I was challenged in the best ways possible and as a result, my knowledge and interest in public health grew,” he says.

Among his higher education mentors, McCoil considers himself to be fortunate to have worked with Bethany Naser, Jarod Holt, and Andrew Savage. “I am so excited to begin my master’s program this fall, and it is because of the lessons and encouragement I received from people like them.”

McCoil, a student like many others whose career path would evolve throughout their undergraduate tenure, has some advice to share with others who have not yet figured out their way forward. “Public health is such a large field with so many areas of focus. My biggest piece of advice is to keep as many doors open and try to experience as much as possible,” he says. “Coming into college I thought I knew what I wanted to do, but here I am four years later doing things I did not even know about at first. If you open yourself up to new things, you are only going to benefit in the long run!” 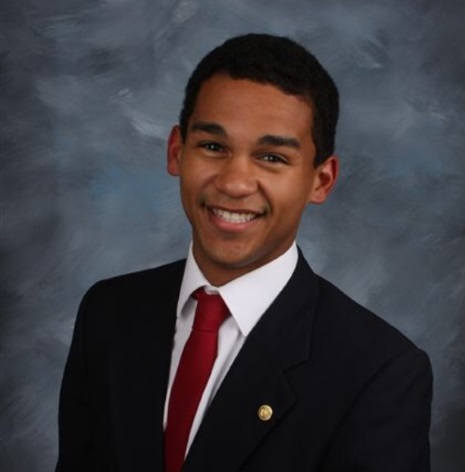 Kyle McCoil graduated in May with a B.A. in Public Health. He will begin a Master's in Higher Education and Student Affairs at the University of Michigan this fall. 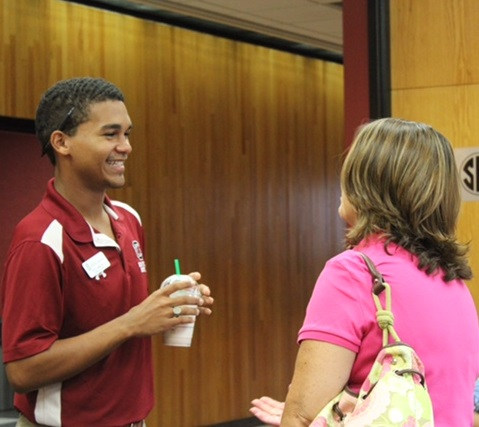 Kyle McCoil held many leadership roles at the UofSC, including Orientation Leader (he is shown here speaking to a parent) and various roles through his fraternity (he is pictured above at the Ruck Leadership Institute).