Like many high school students, Laja Wright was seriously considering a career in medicine when she began looking at colleges. Then, like many of her peers, she discovered public health.

Wright learned about the major because it provided the right preparation for medical school while offering an interesting and relevant context. After she began her courses, however, public health became both a passion and a career path for Wright.

The rising senior is set to graduate next May, at which point she will pursue a master of public health degree. Wright then plans to earn a doctorate in health promotion and health education to become an academic professor.

There are so many opportunities to do so many things within the field of public health. You would be surprised to learn how many of the things we encounter in our lives on a daily basis are related to public health in some aspect.

Between now and then, she’s doing everything possible to prepare for this challenging career path. This summer, for example, Wright is engaged in an intensive training program at Columbia University. The Summer Public Health Scholars Program kicked off with two weeks of orientation with its funding agency, the Centers for Disease Control and Prevention’s (CDC) Office of Minority Health & Health Equity, and the Columbia University Medical Center in New York City.

The remaining eight weeks of the program are spent at various field placement sites working with health professional mentors from an array of disciplines in public health settings, learning through academic enrichment, and participating in field trips to observe public health interventions. The students, who are provided with a stipend, travel, and housing, complete a final project at the end of the internship period.

Wright, who learned about the program through the Arnold School listserv, considered multiple programs funded through the CDC—ultimately narrowing it down to two programs. “I know it might be intimidating to apply for an internship at an Ivy League institution, but you never know until you try,” she says. “Internships, such as this one, are looking for diverse individuals that bring a variety of skills to the table.”

If you want to major in public health, do it. You will not be disappointed.

One way Wright’s application likely stood out: her participation in the Ronald E. McNair Post-Baccalaureate Achievement Program. A component of UofSC TRiO Programs, the McNair Program prepares promising, underrepresented undergraduates for graduate education by involving them in original research and other scholarly activities. For her McNair research project, Wright examined how historical unethical practices have influenced medical mistrust within the African American community and its connection to health disparities.

Wright further advanced her research skills with guidance from Alyssa Robillard, an associate professor of health promotion, education, and behavior. “I was in her HPEB 553: Community Health Problems class, where I gained a large amount of public health knowledge and was really exposed to the concept of health disparities and the various causes of health disparities,” says Wright of her mentor’s influence.

For those who are interested in a career of public health, Wright can’t recommend it highly enough. “Public Health is a very diverse field, and it can intersect with a variety of other fields,” she explains. “There are so many opportunities to do so many things within the field of public health. You would be surprised to learn how many of the things we encounter in our lives on a daily basis are related to public health in some aspect. If you want to major in public health, do it. You will not be disappointed.” 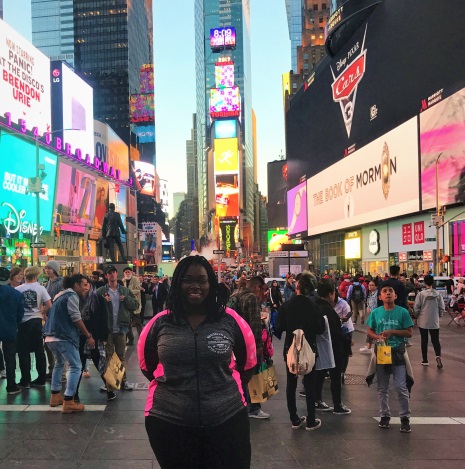