Making the jump. Alumna switches careers to advance public health while drawing from her law experience

Ashley Robertson is technically on her second career, but she’s built on her professional experiences in such a way that she has seamlessly weaved her passions for law and healthcare into her dream job. The 2016 graduate of the health services policy and management (HSPM) department’s Ph.D. program is an assistant professor of healthcare administration at Samford University, and she just helped launch her School of Public Health’s bachelor’s degree in health administration—a program that has already won a national award.

Robertson’s first job out of law school wasn’t exactly a dream. In her role as an attorney in legal and legislative affairs for a medical association, she had a firsthand view of the challenges facing our current healthcare system.

Public health is like no other field—you are dealing with lives, not widgets, and that grounding in and of itself gives purpose and clarity in your career.

“I got to see a lot of what was ‘wrong’ with healthcare, especially the plight of providers and patients in rural areas,” Robertson explains. “I saw how special interests in healthcare could influence policy, sometimes in ways that were clearly for the public good, but often in ways that left patients and other stakeholders out in the cold.”

As Robertson began digging further into these policies, she became aware of the differences in administrative culture between providers and how these differences could impact patient outcomes. “I realized that I wanted to be involved in discovering what we should and could be doing in healthcare to improve it for all involved, maybe in some small way, in ‘helping’ to shape healthcare going forward,” Robertson says of her decision to pursue a Ph.D. in policy and administration.

The Arnold School’s HSPM program stood out for Robertson right away. It aligned with her goals and was home to researchers actively working to improve rural health. In addition to her experiences as an attorney, Robertson spent much of her childhood in one of the most impoverished rural counties in the country.

As a result, Robertson immediately set her sights on getting involved with the South Carolina Rural Health Research Center. After contacting the Center, Robertson connected with its director, HSPM professor Janice Probst.

“Dr. Probst took me under her wing, and I was able to have the wonderful experience of learning from the amazing faculty in the HSPM program, as well as gain invaluable research skills at the Center,” Robertson says. “She has been a wonderful mentor, who was always giving of her time and her bottomless wealth of knowledge, but she has also been an amazing example of what a great leader is: she is brilliant, yet incredibly humble, and thinks of her ‘people’ first. She has set a standard of caring and professionalism.”

Robertson also found a mentor in School of Medicine associate professor and rural health researcher Kevin Bennett. “Dr. Bennett saw in me abilities that I did not see in myself and encouraged me time and again to go outside of my comfort zone,” she says. “He never failed to make time for me, even though he is incredibly busy, and he has always, without exception, truly and clearly cared about not only my work and school-related questions, but also my professional and even personal life. I would not have come half as far in my research if it were not for him.”

After graduation, Robertson immediately landed her position with Samford, where she focuses on healthcare policy, health law, long-term care, and rural health. Her current research examines the interplay between Medicare and Medicaid policies in long-term care utilization.

Under the leadership of a new chair who joined the School just months before Robertson, the department hit the ground running on the development of the new undergraduate program, which welcomed its first cohort in the fall of 2016.

“It has honestly been a blur, but I wouldn’t trade it for anything,” says Robertson. “We were developing classes at the same time we were teaching them, recruiting faculty and staff, building relationships, focusing on accreditation and certification standards, and, well, designing an entire curriculum.”

She credits the supportive team of faculty and staff who worked together to launch the program for its success. In particular, she points to the contributions of her School of Public Health’s Dean, Keith Elder, who began his academic career as an assistant professor in the Arnold School’s HSPM department.

For their efforts, the team received the 2018 New Program of the Year award from the Association of University Programs of Health Administration, which is the national certifying body for undergraduate programs in healthcare administration. “We are so honored and excited that AUPHA has recognized our program as one that is serious about healthcare administration education and genuine in our efforts to ensure that the next generation of healthcare leaders is engaged and prepared for the task ahead,” says Robertson. “I think this award validates that we are doing what we’re supposed to be doing, on a national level. It also stokes the fire—the fire’s already been lit. We’re going to keep driving our mission home, and I cannot wait to see what this program becomes!”

For those interested in advancing public health while serving as leaders in their fields, Robertson has some advice. “Do it. Public health is like no other field—you are dealing with lives, not widgets, and that grounding in and of itself gives purpose and clarity in your career,” she says. “We need more public health professionals—a lot more—and we need public health professionals who are earnest and really want to make a difference. There are so many different paths to success in public health—all of which will allow you to wake up each day and look yourself in the mirror. I’m so glad I made the jump.” 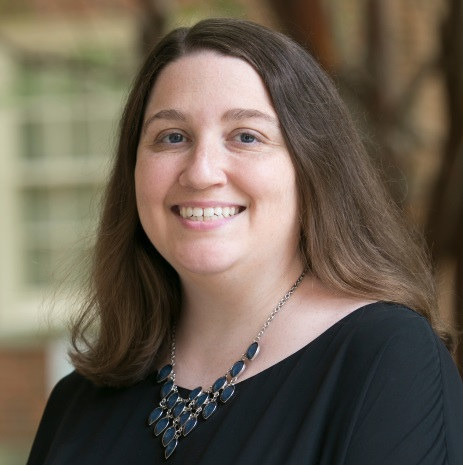 Ashley Robertson is a 2016 alumna of the Ph.D. in health services policy and management program. She is now an assistant professor of healthcare administration at Samford University.