Martha Haynes retires after 15 years with doctor of physical therapy program, 38 with university

“I’ve spent two thirds of my life working here,” says Martha Haynes, reflecting on her tenure at the University of South Carolina. The now-retired doctor of physical therapy (DPT) admissions coordinator will remain in the Columbia area, where she has lived since moving here at the age of 15.

After attending AC Flora High School, where her own children would later go, Haynes applied to USC to study retail management. Her first job after graduation, however, was with the South Carolina Department of Labor, where she worked for a few years before returning to UofSC to work at the Graduate School.

The year was 1980, and Haynes couldn’t predict that in her 23 years with the Graduate School she would cross paths with the Pope, Ronald Reagan, Bruce Springsteen, Rue McClanahan, and other university visitors. Her tenure in the Byrnes building would also result in her contributions to the university’s first Graduate Student Day and doctoral hooding ceremony as well as introduce her to lifelong friends [Note: the Graduate School is currently in the process of moving to the Close-Hipp building].

“Martha was a vital part of one of the most significant administrative changes that occurred during an unprecedented period of growth in graduate programs and enrollment, and as the Graduate School evolved, so did Martha’s skill set and areas of responsibility,” says assistant dean and ombudsman Dale Moore, whom Haynes met over breakfast when he first joined the Graduate School as a graduate assistant. “Her legacy has survived many changes in the Graduate School, and she continues to influence how we frame policy and procedure, especially in areas of student hiring and special events.”

By 2003, Haynes was eligible to retire thanks to her early start with state employment. She wasn’t ready to leave the workforce entirely, but she wanted a part-time position that would enable her to spend time with her two children.

Trudy Hook, Haynes’ friend and the business manager for exercise science, let her know about an opening with the department’s new DPT program. Haynes met with Bruce McClenaghan, DPT’s inaugural director, and agreed to serve as the admissions coordinator.

“We had our ups and downs, but the program and its vision have endured,” says McClenaghan. “All those who have come before and are now doing great things in practice and those to come in the future all have Martha to thank. I especially want to thank Martha for being a great partner. The program would not be what it is today without her.”

When Haynes joined the program, the first cohort of students was underway. That inaugural class had around 30 applicants and admitted a dozen students. Today, the program receives more than 600 applications for just 30 spots. Their “boutique” approach to education and 100 percent pass rates in graduation, ultimate licensure passage, and employment in clinical positions has led to U.S. News & World Report rankings in the top 16 percent among the 230 DPT programs in the United States.

During her 15 years with the program, Haynes has navigated this growth and numerous accreditation requirements, operational changes and technological advancements, but one thing remained the same: her relationships with students.

“Martha was the first USC DPT ‘voice’ I, and countless others, encountered,” says 2017 alumna Ashlee Wilson. “From those first welcome emails to the last one after graduation, she provided the guiding hand and loving comfort that earned her the title of ‘DPT Mom’ from our class. Our crew and others before and after would have a few less happy memories and an infinitely more intimidating orientation process without her!”

“Martha was the first impression of USC for me and an unforgettable one that would shape my future,” adds 2011 alumnus Brad Saunders. “Our conversations before school and once enrolled made the transition away from home easier. Both Bruce and Martha sold me on family. That family would give me my wife, Christy, my son, his godmother, Amy, and the greatest therapy class of 2011 to ever graduate!”

“Martha made USC DPT feel like home,” says 2009 alumna Harmony Noda. “She embodies so many amazing characteristics—smart, professional, down to earth, and truly the most welcoming and helpful person. Any conversation with Martha felt like I was talking with a friend, mentor, parent, confidant...no matter what random or obnoxious question I ever came with, I always left feeling upbeat and empowered.”

Since September of last year, Haynes has been working with her successor, Ashley Colonna, to ensure a smooth transition for this critical position that in many ways serves as the face of the DPT program. Though she’ll return periodically to share her expertise on the seasonal aspects of the job that have not arisen yet, Haynes’ spring-time departure is perfect timing for the third phase of her career.

Never one to sit idle, Haynes is ramping up her activities as a realtor with Home Advantage Realty, a role she has enjoyed for the past five years. She also plans to spend more time with family, especially her husband Brad, and their two children, Jackson and Jenna—all of whom are UofSC alumni as well. And as anyone who knows Haynes expects, she will continue attending Gamecocks events and prioritizing her physical fitness.

“Everyone who has come through the doors at UofSC DPT knows Martha and what Martha means to the program,” says associate professor and program director Stacy Fritz. “Since the inception of the program, she has supported the faculty, the students and thousands of inquiring students each year. Her presence is already missed, but we wish her the best in her well-deserved retirement.” 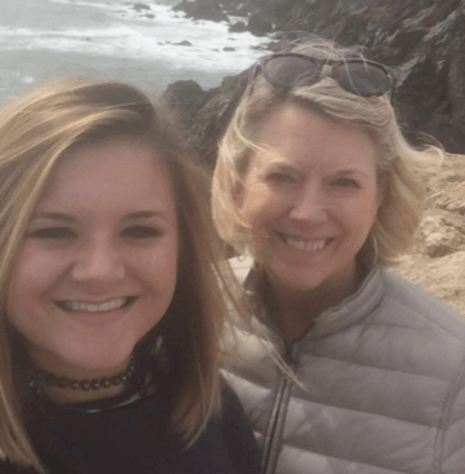 Martha Haynes (pictured at right with her daughter, Jenna, who graduates from UofSC this semester) joined Carolina in 1980 and worked with the Graduate School for 23 years before spending another 15 years with the doctor of physical therapy program.