I Am Public Health: Manel Boufaied

Manel Boufaied’s father is a pharmacist, so becoming one was always her plan. In her native Tunisia, where she says there is no distinction between undergraduate and graduate school, Boufaied plunged into her pharmacy program right after passing her country’s high school equivalency national exam.

By the time she had graduated with her doctor of pharmacy degree from the University of Monastir, Boufaied had developed her own unique perspective on the healthcare field. She had amassed experience as a pharmacist in clinical, hospital and retail settings and worked as a project manager, which made her realize she loved the world of healthcare operations. Boufaied was also influenced by her homeland’s changes.

“The Tunisian revolution of 2011 made me dream big and see a tremendous number of opportunities and challenges—lots of them—in the country,” she says. “I want to be a part of the change and want to make a positive impact so I decided to focus more on the managerial side of healthcare over the clinical side.”

After learning that Tunisia did not offer any master of health administration programs, Boufaied broadened her search. She found some great options in the United States and made two trips there as a tourist. She also took an online leadership and management in health course from the University of Washington.

Then, in a stroke of luck, she met a Tunisian dentist who was preparing his Fulbright Scholar application to pursue a master of health administration in the U.S. “It all started from there,” Boufaied says of her chance encounter with Oussama Zekri who ended up in the Arnold School’s health services policy and management (HSPM) as well. “He was talking to me that day, and I was thinking, ‘That’s exactly what I want to do’.”

Boufaied knew that UofSC was a perfect fit because of the program’s rich curriculum and semester-long administrative residency requirement. “Besides, the campus is gorgeous, Columbia is such a welcoming city, the weather is perfect, the people are incredibly nice…so what’s not to like!” she adds.

During her program, Boufaied had the opportunity to compare health systems among several countries when she took a global health course in Taiwan with HSPM professor and chair Mahmud Khan. She also represented UofSC as a team member in the National Association of Health Services Executives case competition in San Antonio and served as a presenter for the Public Health–Government Complex track during the 2017 Fulbright Global Health Innovations Seminar in Atlanta. On campus, she served as the treasurer of USC’s Healthcare Executives Student Association and ambassador of Tunisia for USC Thinking Globally.

A May graduate, Boufaied recently completed her residency requirement with a five-month appointment as an international operations intern at the Cleveland Clinic (ranked No. 2 on U.S. News & World Reports’ Best Hospitals Honor Roll). After receiving the AUPHA Foster G. McGaw Scholarship Award for graduating at the top of her class with a 4.0 GPA at the Arnold School’s hooding ceremony this month, Boufaied is planning to pursue an international career in healthcare management to apply what she’s learned.

“I like healthcare operations, and I am keen to work on solving problems and improving processes,” she says.

In addition to making the most out of the opportunities her program presented, Boufaied also values what she learned from mentors and classmates during her time at UofSC. “Dr. Bankole Olatosi has been incredibly helpful and resourceful, and I reach out to him whenever I have any concerns,” Boufaied says of her advisor, who is also the master of health administration program director.

“Mr. Jim Lathren was my leadership class instructor and professional coach,” says Boufaied of the chief operating officer of acute care services for Palmetto Health and Arnold School adjunct instructor. “He motivates me a lot, and I am honored to be his mentee.”

“Last but not the least, my classmates have influenced me a lot throughout my journey at USC,” she adds. “I was the only international student in the program and my American peers made me feel so special. They immersed me in the American culture and the Southern American culture in particular. We had a blast and learned a lot from one another.” 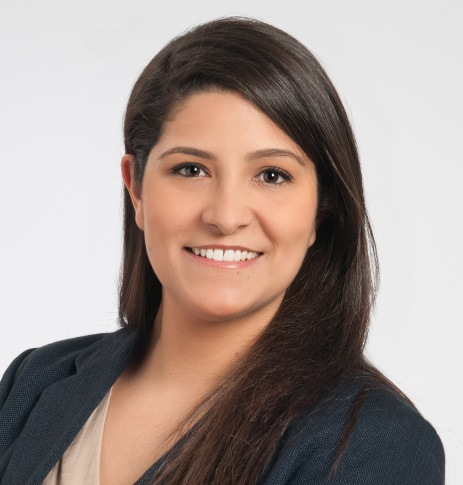