Doctors told Jasmine Norris that she would never be able to complete a higher education degree due to the traumatic brain injuries she had experienced, but she proved them wrong. The Arnold School alumna not only completed a bachelor’s in public health, she’s on track to graduate with her law degree from UofSC next year. And she has a new mission: to help others overcome the same obstacles she has faced.

After growing up in Charleston, Norris moved to the Upstate to play soccer for Converse College. At the end of her first season, she experienced a career-ending concussion. Norris decided to transfer to South Carolina, but her challenges were far from over.

“When I first got to USC my sophomore year, I had just suffered from my fourth concussion, and I struggled so much that first semester,” says Norris, who then went to see a neuropsychologist who diagnosed her with frontal lobe damage. “Once I knew what was wrong with me and that I wasn’t just broken, I found new ways to study and new ways to cope and ended up having a 3.7 GPA or higher every semester after that.”

With her passion for understanding traumatic brain injuries growing every day, Norris decided to change her major to public health, but her difficult first semester lowered her chances of getting into the program. She went to see then-undergraduate program director Steve Barth, who decided to give her a chance and signed off on her request.

Having that positive and encouraging atmosphere from the School of Public Health was such a great influence all in itself. I always felt like I mattered, and that I wasn’t alone no matter what the issue was and just knowing that in the back of your head can work wonders.

“I don’t remember a lot of that year because of the concussions, but I remember going home and crying because things were finally looking up after a very dark year,” Norris says. “Steve Barth probably has no idea how much of an impact he has made on my life, but every time I’ve accomplished something big since then, I’ve thought of that moment and how I owe him so much gratitude for going out on a limb for me and giving me a chance.”

Public health was the perfect setting for Norris, who had always been intrigued by the field. During her undergraduate program, she completed an Emergency Medical Technician Certification to become an EMT, a job she has continued to hold through her law program as well. She’s also recently become a volunteer fire fighter with the Sandy Run Volunteer Fire Department. Norris says that her passion for helping people and working in emergency medical services allows her to help the community in many ways and connect with people on different levels.

As a senior, she completed her Capstone Seminar project on the psychological aftermath of traumatic brain injuries. Sara Corwin, associate dean for undergraduate student affairs, oversaw the course and served as an important mentor for Norris.

“Dr. Corwin definitely inspired me to keep working my butt off and not let the doctors telling me I may not be able to graduate get to me and really helped me believe that I can do absolutely anything I set my mind to if I’m willing to put in the work,” she says of her advisor. “Having that positive and encouraging atmosphere from the School of Public Health was such a great influence all in itself. I always felt like I mattered, and that I wasn’t alone no matter what the issue was and just knowing that in the back of your head can work wonders.”

Now a third-year law student, Norris continues to amass knowledge related to traumatic brain injuries. This spring, she successfully crowd funded travel expenses to attend the 32nd Annual North American Conference on Legal Issues in Brain Injury and the 13th World Congress on Brain Injury in Toronto. As one of more than 1,000 attendees from around the world, Norris learned from experts who spoke on topics related to both the medical and legal fields.

She noted, however, that among the 1,000 participants, only 40 attorneys were in attendance. The lack of representation by those in the legal field made it clear to Norris that there was a lot of catching up to do – and a lot of opportunity.

Norris is still working out the details on how to combine traumatic brain injuries and law into a career, but some of her ideas include addressing policy concerns and the lack of education that prevents traumatic injuries from being handled properly by schools, sports teams and health care providers. She’s also thought about running a non-profit that specializes in helping veterans and athletes recover and find new purpose in life after traumatic brain injuries prevent them from serving their country or playing their sport.

A lot of things in life are out of our control, but how we react to things is completely in our control. My biggest struggle ended up fueling my greatest passion and for that I’m forever grateful.

“I would really like to find a way to address the issues surrounding the psychological aftermath that often comes with suffering from traumatic brain injuries,” says Norris, who volunteers with the Brain Injury Association of South Carolina and has given guest lectures at The Citadel to raise awareness. “A brain injury can be a very lonely and isolating injury that can change your entire life, even change who you are as a person.”

Norris knows from experience. Throughout the five concussions she’s experienced in the past 10 years, she has been told countless times to “find a new normal” – well-meaning advice that is easier said than achieved.

“My injuries are a constant obstacle in my life and for a long time doctors told me I would not graduate from undergrad, much less ever be able to attend law school,” Norris says. “If I can make life a little easier for others that are struggling with traumatic brain injuries or give them some hope and show them that they aren’t alone, I would be very content with life.”

She’s continuing to take steps toward that goal through her role as an EMT and volunteer as well as her own continuing education and research efforts. This fall, for example, Norris will complete an independent research project on traumatic brain injuries based on what she learned at the conferences she attended in Toronto as well as her ongoing activities.

“No matter what hardships you face, things will always get better if you’re resilient and persevere. If you consistently do positive things for yourself every day, whether that’s going to class, volunteering somewhere, deciding to continue your education at the next level, or simply going to the gym, no matter where you end up in life, there’s no way you can fail,” Norris says of the lessons she’s learned. “A lot of things in life are out of our control, but how we react to things is completely in our control. My biggest struggle ended up fueling my greatest passion and for that I’m forever grateful.” 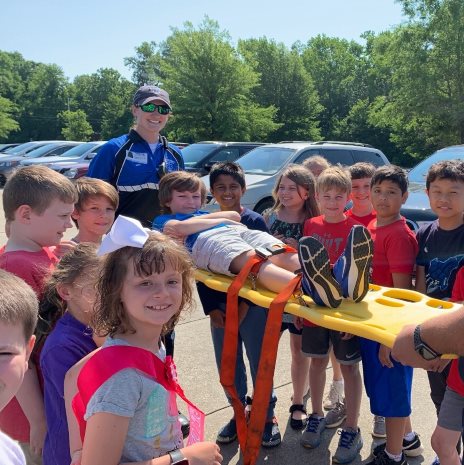 Jasmine Norris (shown here teaching local elementary school kids about career opportunities in emergency medical services) graduated from the Arnold School with a Bachelor of Arts in Public Health and is a third-year student in the USC School of Law.