As soon as Jamie Lead joined the Arnold School’s Department of Environmental Health Sciences in 2012, he hit the ground running – establishing the South Carolina SmartState Center for Environmental Nanoscience and Risk (CENR) and immediately launching ambitious research initiatives to harness the benefits and minimize the risks of nanoscience. Two short years later, Lead and his research team published their first paper on a revolutionary technique they invented for cleaning up oil contamination that may just change the world.

Using a method that is faster, cheaper, cleaner and safer than others, Lead uses nanoparticles and magnets to remove oil from both oil-water and oil-soil mixtures (see video and explanation at right). Over the past several years, Lead has been perfecting the technique – testing it on a range of environmental conditions within the lab, using it in combination with oil-degrading bacteria and scaling it up to prepare the approach for real-life applications.

By working quickly and efficiently, while creating no residual toxins that harm environmental and human health, this innovative environmental clean-up technique has the potential to become a game changer for responding to hazards. Such hazards include catastrophic accidents (e.g., BP’s Deepwater Horizon oil spill of 2010, which cost an estimated $14 billion to clean up) and smaller-scale negligence (e.g., discharge from factories/ships) and/or ongoing problems (e.g., runoff from roads) that affect local communities and environments. It can be used proactively before any spills, and for other problems such as lead contamination. Whether large- or small-scale, the clean-up will benefit the contamination site and will have a positive economic benefit.

Though deliberately simple in its application, the development of CENR’s novel technique has required the expertise of the entire team of researchers including five postdoctoral fellows and four Ph.D. students, under Lead’s guidance. These developments have resulted in four patents and more than 10 publications, with many more submitted and in preparation, just related to their oil clean-up technique.

CENR is currently in the process of preparing the technique for commercialization through Lead’s company, GeoMat, so that it can be accessed and implemented by government agencies, private companies, especially those related to environmental clean-up and the oil industry, and others across the world. To support these efforts, the National Science Foundation recently awarded Lead a $50,000 grant through their Innovation Corps (I-Corps) program.

I-Corps helps accelerate the process that university scientists undergo to extend their research beyond the laboratory to yield economic and societal benefits through its commercial application. The fast-paced program kicks off with a workshop in January and wraps with lessons learned in February, providing grantees with guidance on identifying valuable research-to-market opportunities and helping them develop entrepreneurial skills.

“Our goal is to try to match the basic research conducted in our lab to possible markets, starting with an oil remediation technology,” says Lead. “Both during and after the I-Corps program, the CENR and GeoMat team will continue to develop prototype products based on the lessons learned, as well as continue to target markets for emerging products based on the core technology, such as deployments of the nanoparticles for metal remediation.” 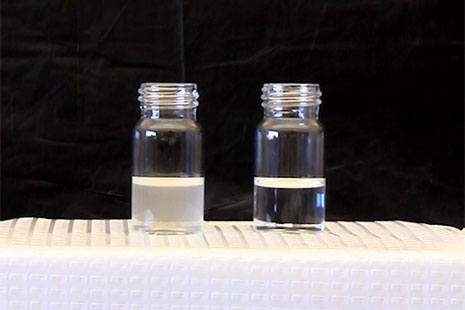 CENR’s cleanup technique works by releasing carefully selected nanoparticles with an iron oxide core into the oil-contaminated water or soil. The oil binds to the external layer of the nanoparticle and then the nanoparticles (along with the bound oil) are removed using magnets while the purified soil and/or water remains.