With a long-term goal of earning a medical degree, Jordan Hammond chose to study public health because she wanted to learn more about the humanistic and social sciences aspects of healthcare. She wanted to approach medicine from a holistic perspective.

Growing up north of Atlanta, Georgia, Hammond applied to 12 universities – paying particular attention to the health majors offered and opportunities to engage in research. “The University of South Carolina excelled in all of these categories,” Hammond says. “The South Carolina Honors College and the Arnold School of Public Health was the best combination for me.”

Hammond made the most of her time at Carolina, becoming involved as a Changing Carolina Peer Leader with UofSC Student Health, a member of the UofSC Leadership and Service Center, a volunteer and ambassador with International Student Services, various roles with Phi Delta Epsilon and Phi Mu, and engaging in various additional activities both on and off campus.

The South Carolina Honors College and the Arnold School of Public Health was the best combination for me.

Her honors include Graduation with Leadership Distinction in Diversity and Social Advocacy, Outstanding Achievement and Student Triumph Award, UofSC Outstanding Senior Award, President’s Award, and a Passport Travel Grant to study Spanish and global health in Spain and The Netherlands. Hammond’s next chapter will build on her study abroad experiences with a return to both countries.

On track to become fluent in Spanish, Hammond has won a fully-funded Excellence Scholarship – including stipends for living and travel – to join the 2020 cohort of the EuroPubHealth+ program, where she will earn two master’s degrees in two years. The first is a general Master of Public Health from the University of Granada, conducted entirely in Spanish. The second degree is a Master of Science in Health Policy and Leadership from Maastricht University in The Netherlands.

'Shooting for the stars’ will open up doors you never even thought existed.

“I found the Erasmus Mundus programs because I wanted the opportunity to live and study abroad for an extended period of time,” Hammond says. “With this program, not only do I get to interact with healthcare professionals from across the globe in a diverse, dynamic setting, but I get to include my Spanish skills as well.”

With this comprehensive public health background, Hammond will then pursue a medical degree with plans to work at an international health organization in emergency medicine or infectious diseases.

“I can confidently say that the education I received in my four years at Carolina will no doubt make me a better practitioner in the future,” Hammond says. “I want students to know that, no matter how cliché it sounds, ‘shooting for the stars’ will open up doors you never even thought existed. As a program that hosts mostly physicians and Ph.D.s from other countries, I did not think they would give a 22-year old American a spot in their program, but they did – only because I took the risk. So, take risks! Apply for national fellowships and leverage the amazing people from the Office of National Fellowships and Scholar Programs.”

Follow the journeys of some of our other May graduates. 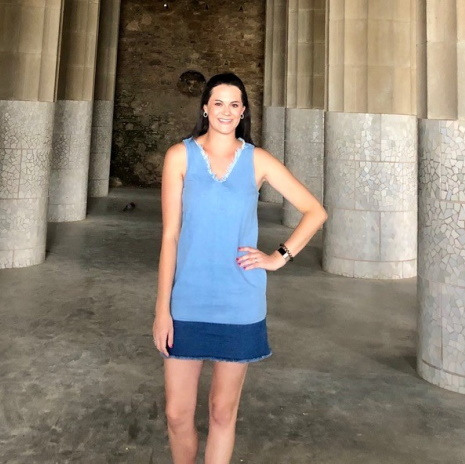