Oluwafemi (Femi) Adeagbo, a postdoctoral fellow with the South Carolina SmartState Center for Healthcare Quality (CHQ) and the Department of Health Promotion, Education, and Behavior (HPEB), has been selected as an affiliate member of the African Academy of Sciences. He is among 40 members in the Academy’s sixth cohort – selected through a rigorous review process of more than 220 applicants – who will receive professional development, mentorship, career support, and other opportunities during the five-year program.

Originally from Nigeria, Adeagbo has spent the past decade traveling to receive training and conduct social science research. His philosophy studies as an undergraduate student at the Adekunle Ajasin University led Adeagbo to become interested in social issues such as morality, politics, religion, racism and medical ethics.

“I am naturally a curious person and very insatiable with knowledge,” he says.

Adeagbo moved to South Africa to complete a master’s degree in migration studies at the University of the Witwatersrand and Ph.D. in Sociology from the University of Johannesburg, where he refined his interests to focus on issues such as gender relations, violence, sexuality, race, social integration, and social justice.

Since completing his doctoral degree in 2015, Adeagbo has continued his research and training on health-related issues in a social context. During this five-year period, he has held postdoctoral and researcher positions in the intersecting areas of sociology and health – engaging in this work in South Africa, the United Kingdom, India, Canada, and the United States.

Adeagbo’s resulting status as a global health researcher made him the perfect fit for his current work at the Arnold School, which began in January of this year. Working alongside CHQ director and HPEB professor Xiaoming Li, Adeagbo’s current research focuses on HIV/AIDS prevention and treatment interventions in South Carolina and around the world.

“Dr. Li is one of the world’s renown scientists in HIV research, and his work on HIV-related stigma is outstanding,” says Adeagbo, who is also grateful to CHQ members Banky Olatosi, Shan Qiao, Xueying Yang, George Tam, Quan Zhang, Monique Brown, and Joni Zwemmer for their unending support on and off academic matters. “My first conversation with him – while I was still in South Africa – was a turning point in my research agenda, and I count myself lucky to have him as my mentor.”

In addition to his selection as an African Academy of Sciences affiliate, which is designed to support young and early-to-mid career African scientists, Adeagbo is one of 40 applicants to be accepted into the National Institutes of Health’s Stigma Research Training. Other recent honors include his recognition as a promising young researcher by the South African National Research Foundation and the Health Sciences Research Award from the University of the Witwatersrand. In addition to his work with CHQ and HPEB, Adeagbo has two current research development grants from the South African National Research Foundation and the Medical Research Council (United Kingdom) to develop interventions to improve HIV services uptake (including stigma reduction) among men in rural South Africa.

“Most people believe that you need to have at least a natural science degree to study public health, but there are many areas within public health that one can specialize with or without previous natural science degree,” Adeagbo says. “I would advise prospective students to take their acquired knowledge beyond the classrooms and start implementing impactful research and programs – including community engagement – that would reduce the burden of diseases in our environments.” 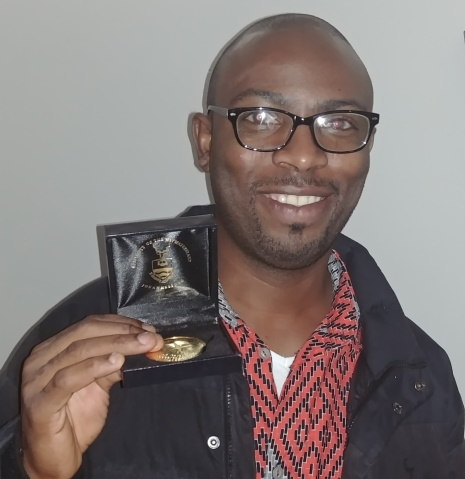 Oluwafemi (Femi) Adeagbo is a postdoctoral fellow with the South Carolina SmartState Center for Healthcare Quality and the Department of Health Promotion, Education, and Behavior. He is pictured above holding the Health Sciences Research Award from the University of the Witwatersrand.