I Am Public Health: Anja Derry

Anja Derry’s first experience with the field of communication sciences and disorders (COMD) was when she was an elementary school student receiving speech therapy services. The Florence, South Carolina native enjoyed the time spent with her speech-language pathologist, and the profession made a good impression on her. Fast forward to her undergraduate studies at UofSC, and the experimental psychology major decided to explore the field a little further.

“I connected with a family friend who is a speech-language pathologist and decided to volunteer at her private practice during a summer camp she hosts at her clinic,” Derry says. “I fell in love that summer. I was so intrigued by the way that she and other therapists were able to combine skilled speech and language services with activities that were fun and engaging.”

While researching graduate programs, Derry spent a semester observing speech therapists at McLeod Health, where she met an alumna of the Master of Science (previously known as Master of Speech Pathology) program offered by the Arnold School’s COMD department.

“I met some amazing speech-language pathologists who were so helpful in my process of selecting a graduate program and answering all the questions I had about the field,” says Derry, who received a McLeod Health Scholarship to support her graduate studies. “I was also able to meet some of the sweetest, strongest children which continued to build my passion.”

After enrolling in the Master of Science in Speech-Language Pathology program, Derry became an active member of the Aphasia Lab – a close-knit team of students, clinicians, and researchers led by COMD professor Julius Fridriksson who work to improve treatment and recovery related to aphasia (i.e., a communication disorder resulting from brain damage such as stroke). Derry has contributed to two of the lab’s major studies and is an active member of Play on Words: An Aphasic Drama Group, where the team engages stroke survivors in improv games, practice scenes, etc.

“I love having the opportunity to get to know the members on a more personal level and watching them grow and improve through these weekly – now virtual – meetings,” Derry says. “They have overcome many obstacles, and getting to be a part of their journey is a gift.”

Through her work with the Aphasia Lab and her coursework, Derry found a mentor in associate professor and graduate director Dirk den Ouden. She also connected with clinical assistant professor Jamy Claire Archer, who supervised Derry’s clinical experiences in the department’s Montgomery Speech-Language-Hearing Clinic.

“In working with both of them, I have always felt heard and supported,” Derry says. “I hope to create an environment like they have built when I have the opportunity to mentor students.”

Derry plans to graduate this summer after completing her final clinical rotation. Her goal is to work in a pediatric outpatient or school setting, and she is particularly interested in working with children who have autism spectrum disorder. Long term, she would like to develop solutions to decrease the impact that socioeconomic status and healthcare access have on public health.

“I would really be interested in opening a free clinic with other clinicians one day to hopefully connect with clients and their families who are faced with this difficulty and missing out on the opportunity to improve their communication skills,” Derry says. “I believe that everyone deserves an equal opportunity to receive the care that they want and/or need.” 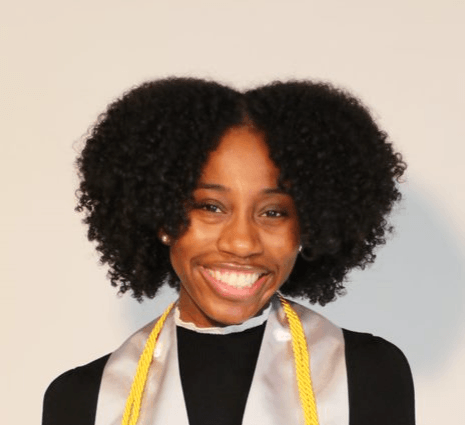 Master’s student Anja Derry is pursuing a career as a speech-language pathologist to support children with communication disorders, particularly those who have limited resources to access healthcare/rehabilitation services.