Harold (Matt) Trogdon has been an active-duty Marine for the past decade. Two years into his service, the Smithfield, North Carolina native and father of two began a career mentoring and training Marines.

First as a Primary Marksmanship Lead Instructor and then later as a Rifle Platoon Sergeant, Trogdon developed and implemented training plans related to weapons use and safety for hundreds of service members. He oversaw the management of hundreds of thousands of dollars’ worth of equipment and supervised employees.

Across these experiences, Trogdon observed a common challenge (mental health) and decided to earn a degree in a health-related field. “I’ve seen the mental health crisis and suicide problem in the military and veteran community and wanted to make a difference,” he says.

In addition to its close proximity to his home state, UofSC appealed to Trogdon because of the Arnold School of Public Health’s rankings as a top tier program (No. 13 in 2020 among public universities according to U.S. News & World Report). The Arnold School offers two bachelor’s programs, and Trogdon explored both: originally studying exercise science and eventually switching to public health while retaining his interests in both areas.

I’ve seen the mental health crisis and suicide problem in the military and veteran community and wanted to make a difference.

“The public health program at UofSC is outstanding and full of professors who are passionate about it,” he says. In particular, he found mentors in clinical associate professor Kara Montgomery and senior instructor April Winningham – both of whom helped him understand how to achieve his goals through their personable interactions.

“Dr. Montgomery is so passionate about public health and helps you see what it’s really about. Her motivation is contagious and demonstrated how I can make a difference,” Trogdon says. “Dr. Winningham is super energetic and a profound professor who cares so much about her students and their future careers. She has shown me how to create an implement a health promotion intervention.”

Known as the Gamecock Batallion, Navy ROTC is open to all majors at UofSC and is designed to prepare students for service as officers in the U.S. Navy or Marine Corps. With a national reputation for excellence, the program offers perks such as its outstanding scholarship program, private gym, community and university housing, active alumni association and access to three nearby military installations (Fort Jackson, Parris Island, Joint Base Charleston)

Trogdon joined the Gamecock Batallion through the Marine Enlisted Commissioning Education Program and was one of a few students selected to hold a position of responsibility. As a Marine Corps NROTC Instructor, he organized and supervised the training of more than 80 midshipmen in accordance with Naval Service Training Command Regulations for Officer Development – receiving numerous awards and certificates for his efforts.

Applying what he was learning in the classroom, Trogdon developed custom physical fitness programs for individual trainees to ensure readiness and reduce health risks for future Marine and Naval Officers.  He also assisted with wounded warrior trials at Camp Lejeune in North Carolina, the S.C. Department of Natural Resources veterans hunt at Cowden Plantation (in memory of Spc. Thomas Caughman, who was killed in Iraq), and other veterans’ programs.

After graduating in May, Trogdon will attend The Basic School in Quantico, Virginia as a 2nd Lieutenant. He plans to inform his fellow Marines about the health resources available to them and begin the planning process for implementing a mental health intervention for veterans after his eventual retirement from active duty.

“The public health field is very broad and a very interesting field of study,” Trogdon counsels prospective students. “With the current state of our country, we are in dire need of motivated people that want to make a difference in the overall health of our country and world.” 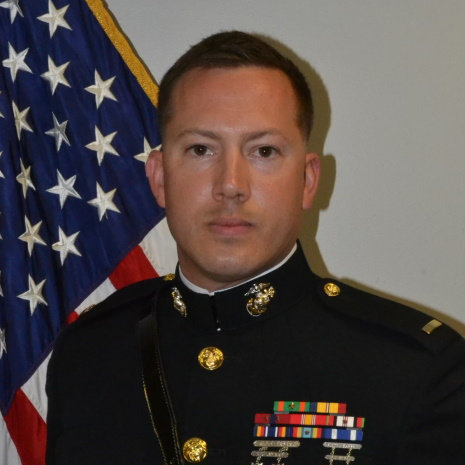 Harold (Matt) Trogdon graduates in May with a B.A. in Public Health. Next, he will attend The Basic School in Quantico, Virginia as a 2nd Lieutenant.