Staff Spotlight: Mike Young, Director of Equity, Diversity and Inclusion for the Center for Community Health Alignment and PASOs

Mike Young is an expert on culture. He has studied it and lived it for his entire life.

As a teenager from rural El Salvador, Young’s mother waited at the Mexico-U.S. border for two weeks before immigrating to California with a sixth-grade education. She learned English and eventually married – teaching her children her native Spanish and creating a family that identified with multiple cultures.

When Young was an undergraduate student at California State University, he embarked on the first of four cultural immersion experiences – conducting an ethnoecology field study in Mexico. After completing bachelor’s degrees in anthropology and human resource management, he moved across the country to enroll in UofSC’s M.A. in Cultural Anthropology program.

“My understanding of identity was always shaped by my upbringing and compounded by the issues I saw in the world,” Young says. “Anthropology helped me comprehend and effect change.”

He would make his first trip to Guatemala during his master’s program and return two more times during his doctoral studies. These ethnographic studies added up to nearly a year of Young conducting research with remote indigenous communities in the jungle – participating in their daily activities to better understand their experiences.

“Earning the trust of entire communities, being the only outsider, and collaborating in ways that supported and worked best for them became second nature,” Young says.

Having studied how people connect, share, support and understand one another within a community, he was eager to put these principles into action and positively impact the livelihoods of others. In 2016, Young joined the PASOs as the Research Project Manager. He later served as the Director of Capacity Building and then Co-interim Executive Director. Today, Young is the Director of Diversity, Equity, and Inclusion for both PASOs and the Arnold School’s Center of Community Health Alignment (CCHA) where PASOs is housed.

"CCHA’s mission is to co-create solutions to advance health equity alongside communities," director Julie Smithwick says. "To do so involves having open, honest dialogues about diversity, inclusion and health and racial equity then building awareness and capacity of leaders to tackle these hard, yet vitally important, topics. Mike has studied, lived, taught and worked to advance equity in multiple spaces already, and I’m excited to have his leadership to help CCHA further advance our mission and build what we can offer to South Carolina and beyond."

Established in 2005, PASOs is a non-profit organization that connects Latino families and health/social service providers to work together for healthier, stronger families. Over the years, Young has worked to strengthen South Carolina’s Latino communities by overseeing and supporting a statewide team of Community Health Workers/Promotores and strengthening networks in their ability to address the strengths and needs of the community through trainings, technical support, and customized support for partners and coalitions.

“I am excited about enacting change throughout the state of South Carolina and beyond toward co-creating equitable approaches for social uplift by strengthening community health workers and the systems in which they are enmeshed,” Young says. “We have set ourselves up for success and this new role plays to my personal, professional, and academic strengths combining cultural understanding, compassion, and action-oriented outcomes.”

In addition to his work with PASOs and CCHA, Young is a Fellow of the Diversity Leaders Initiative at the Riley Institute, a Board of Directors Member for South Carolina Community Economic Development, and a member of several equity and inclusion coalitions. He is frequently invited by state, regional, national, and local governmental and nongovernmental entities to speak about diversity, equity, inclusion, implicit bias, anti-racism and other social issues.

Young carries this passion into his personal life as singer of the socially conscious rock band, The Haves (see photo at right of Young singing and lyrics from one of their songs). Whether in his personal or professional life, Young is committed to speaking out about issues related to health equity and social justice.

“My education and experiences have helped me develop the ability to speak to issues that can be uncomfortable in a way that is approachable while proving that when community leads the change they desire, we all benefit,” Young says. “It is our role to listen, amplify and advocate on all levels.”

Mike Young is the Director of Equity, Diversity and Inclusion for the Center for Community Health Alignment and PASOs. 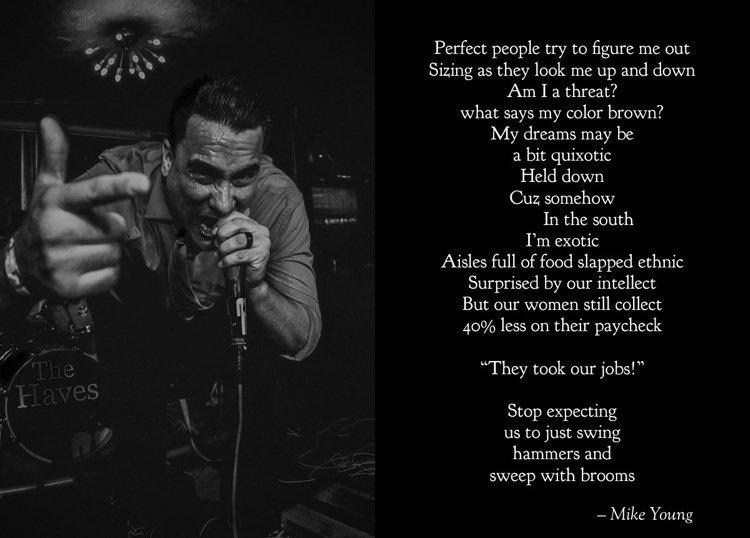 Mike Young is the singer for the socially conscious band, The Haves.