“Hard work and dedication get you through the courses, but compassion and willingness to learn shines through when you work with patients and other professionals,” says Jillian Gierman, an August graduate of the communication and sciences disorders (COMD) department’s M.S. in Speech-Language Pathology – Residential program.

Raised in a household that values healthcare and public health, Gierman knew she was headed toward a health profession – she just wasn’t sure which one until her junior year of college. While studying psychology at UNC – Chapel Hill near her hometown of Cary, North Carolina, Gierman learned about communication disorders during a course in cognitive neuroscience.

“I was fascinated by the intricacies of neural networks and how one interruption can impact a person’s ability to communicate and swallow,” says Gierman. The next semester saw her shadowing speech-language pathologists at WakeMed Rehabilitation Hospital and taking an introductory course in the field – a decision that led her to earn a minor in speech and hearing sciences during the year she had left as an undergraduate.

“I absolutely loved everything about it,” she says. “Speech-language pathology combines my passions of language, neuroscience, healthcare and helping others.”

After graduation, Gierman spent another six months at UNC as a research specialist with the Cecil G. Sheps Center for Health Services Research, where they focused on patients diagnosed with dementia within assisted living facilities. She continued learning about neurogenic disorders by joining COMD associate professor Jessica Klusek’s SC Family Experiences Lab as a researcher.

Gierman spent nearly two years working with Klusek to study communication disorders associated with fragile X before shifting into a graduate research assistant role when she enrolled in the master’s program in 2020. As an extension to Klusek’s NIH grant examining the communication abilities of mothers who carry the FMR1 premutation, Gierman’s thesis investigates cognitive dysfunction for this population.

“Working with Dr. Klusek, I learned assessment administration and scoring, how to counsel families on difficult topics and the importance of research in the field of speech-language pathology,” the Winona B. Vernberg Bicentennial Fellow says. “I cannot explain how impactful her mentorship has been for my development as a soon-to-be speech-language pathologist.”

“Speech-language pathology is a profession where you never stop learning, which is one of the great things about it,” Gierman says. “There is no better feeling than telling a patient that he can safely eat and drink after using a feeding tube for months or helping a patient say his wife’s name again after suffering a stroke.”

After wrapping up her degree with a final clinical placement at Reunion Rehabilitation Hospital in Denver, Colorado, Gierman will look for a position in a medical setting. Having had great experiences in all of her rotations, she’s open to working with clients in acute care, inpatient rehabilitation or outpatient settings. Long term, she would like to serve on a hospital board of directors where she can use her background in research and healthcare to implement policies and strategies that create positive changes for public health. 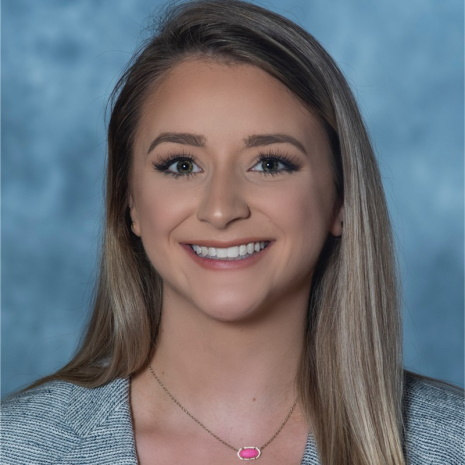 Jillian Gierman graduates in August with a Master of Science in Speech-Language Pathology-Residential degree.