HPEB grad will impact maternal and child health in Zimbabwe

Chiwoneso (Chiwo) Tinago grew up in Zimbabwe, where she witnessed health issues, such as HIV, put women and children at a disproportionate risk for morbidity and mortality. She was inspired by the potential of public health efforts to empower women to actively engage in efforts to improve their health and the health of their families through research, advocacy, community organizing and prevention.

“I come from a family where all the children are females,” Tinago says of her herself, older sister, twin sister, and younger sister. “My parents were openly scolded for ‘wasting’ their money sending their four girls to the best schools, but regardless of the opposition they faced, they were steadfast and realized the importance of educating female children and did so despite their meager incomes as a nurse and electronics company employee.”

Tinago became the first college graduate in her family, and now the health promotion, education, and behavior (HPEB) graduate is the first to earn a doctorate. The rest of her family has been working hard on their higher education degrees as well. Today, Tinago’s mother has a bachelor’s degree in nursing, her twin sister has master’s degrees in both business administration and international marketing, and her younger sister is a junior majoring in history at William Carey University in Hattiesburg, Miss. “We certainly beat the odds,” she says.

Essentially, the HPEB doctoral program at the Arnold School provided me with a holistic experience where I’ve grown in terms of academics, research, teaching, and service.

The Arnold Fellow has done more than beat the odds—she’s shattered them. Tinago first came to live in the U.S. to earn a bachelor’s degree in psychology from William Carey University. She then went on to complete a Master of Public Health (MPH) at the University of Southern Mississippi—choosing it from among nine other programs she was considering. While considering her options for pursing a doctoral degree that would strengthen her research skills and help her learn more about the best ways to translate evidence into practice, Tinago interned at the Centers for Disease Control and Prevention (CDC), worked as a diabetes outreach coordinator for the Mississippi State Department of Health, and assisted with a USAID-funded maternal and child health program in Zimbabwe.

Then one of Tinago’s mentors from CDC sent her an article written by Anthropology and HPEB Associate Professor David Simmons, who now serves as the Arnold School’s Associate Dean of Diversity, Equity, and Inclusion and was a member of Tinago’s dissertation committee.* “It was about his HIV research in Zimbabwe,” she remembers. “In addition, one of my MPH professors went to school with Dr. Lucy Annang Ingram, whose work with reproductive health research aligned well with my interests, so I decided to drive to USC and meet with both of them.”

Based on those meetings, Tinago was sure she would be provided with the mentored experience she was looking for in a doctoral program, and so she only applied to the Arnold School for her doctoral studies--compared to the nine programs she considered for her master’s degree. The gamble paid off.

“As a doctoral student in public health, I have made the most of the opportunities provided to us by the Arnold School and the HPEB department to learn as critical and innovative thinkers and maintained a 4.0 grade point average while gaining research and teaching experience,” she says. “I have also made sure to be an active member of my academic department, the University, and the Columbia community at large through leadership and service.”

I am leaving this doctoral program with a complete sense of confidence in my capacity to positively contribute to the public health field.

In addition to her teaching and research assistantships, Tinago has served as a Graduate Service Mentor, an advisor for Y-IMPACT (Youth Impacting Minds, People and Communities Together), a Service Saturday site leader, an HPEB representative on the Dean’s Student Advisory Board, and an American Association of University Women International Fellow. Her honors and achievements during her time at Carolina include two peer-reviewed publications (and four more under review or in preparation), the USC Housing Advisor of the Year Award (2013-2014), the Preston Residential College Service Award (2014-2015), an Office of the Vice President for Research SPARC Award (2014-2015), and the USC Dean’s Award for Excellence in Leadership (2015; the third HPEB student in a row to win this award), the USC Provost Award (2015) and the HPEB Doctoral Award (2016). In April of this year, Tinago excelled yet again at USC Graduate Student Day by winning the 2016 Three-Minute Dissertation Presentation Award. Her presentation detailed her examination of pre-pregnancy planning as an innovative approach to improve nutrition status and maternal health of adolescent girls and young women in Zimbabwe—a study that was funded by the Sackler Institute Nutrition Science at the New York Academy of Sciences.

Now that she has graduated, Tinago will remain in the U.S. to gain some additional experience as an Assistant Professor of Health at West Chester University in Pennsylvania. This role will allow her to continue her research agenda in maternal and child health with opportunities to implement programs and mentor future public health professionals. Long term, she plans to coordinate maternal and child programs in southern Africa, which has been Tinago’s goal since she began her public health education.

“Essentially, the HPEB doctoral program at the Arnold School provided me with a holistic experience where I’ve grown in terms of academics, research, teaching, and service,” she says. “I wouldn’t do anything differently. I am leaving this doctoral program with a complete sense of confidence in my capacity to positively contribute to the public health field.” 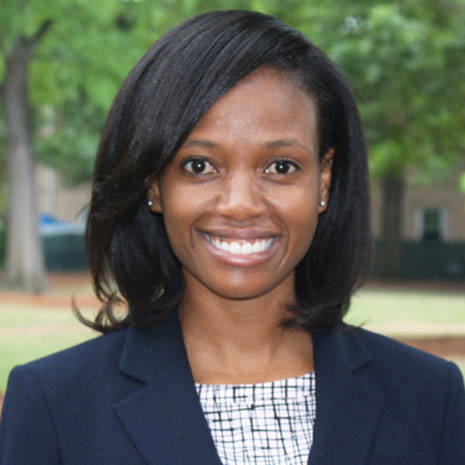 Chiwoneso Tinago came to the Arnold School for the rich mentorship experience. She’s leaving with a Ph.D. in health promotion, education, and behavior and is one big step closer to improving maternal and child health in her native Zimbabwe.