The Department of Exercise Science (EXSC) has selected three graduating seniors, from among those nominated by faculty members, to receive the 2017 Outstanding Exercise Science Student Awards. This year’s winners, chosen for their academic achievements, community service and leadership roles, are Lindy Kyger, Kimberly Narro and Haley Yaw.

Originally from Massachusetts, Kyger is one of the last cohorts of students at UofSC to earn a bachelor’s degree in Athletic Training, which is in the process of transitioning to a graduate-level professional degree program due to changing accreditation requirements. “Majoring in athletic training has given me the chance to learn and grow as an individual through academic success, clinical experiences, volunteer opportunities, and leadership roles,” says Kyger, who was elected to represent her cohort with Arnold School leaders and served as a teaching assistant during her junior year. She was also named on the President’s List or Dean’s List all four years at UofSC.

Through her program’s clinical rotations, Kyger has worked with USC varsity sports and high schools throughout the Columbia area. UofSC has also served as a gateway for gaining experience at worthwhile volunteer events, such as the Boston Marathon and Governor’s Cup Road Race. “Dealing with heat illnesses, cold illnesses, chronic injuries, and acute injuries in such a short span of time allowed me to become confident in my clinical decisions,” she says.

Kyger has already passed the Board of Certification exam to become a certified athletic trainer. She will begin a Master of Education in Higher and Postsecondary Education at Arizona State University this fall.

Narro had a hands-on experience at Carolina as well. “The exercise science department quickly connected what I was seeing in textbooks to what I would see in the field,” the Tennessee native and President’s and Dean’s Lists recipient says. She spent her undergraduate years working alongside her professors to conduct muscle activation research, create and implement interventions for children with motor and perceptual impairment, execute applied behavior therapeutic programs for children with autism, and collect data on physical activity and nutritional habits in after-school programs throughout the state.

The 2017 Who’s Who Student and McKissick Scholar also traveled to Ireland with her department to compare health professions, an experience that inspired her Honors College thesis comparing Irish and American healthcare systems. “I have also developed into a leader during my four years at USC, discovering my passion for promoting change and growth among my peers and within my community,” she says. Narro led flood relief efforts, served as a Senior Service Saturday Site Leader and University 101 Peer Leader, and emceed UofSC's annual Student Leadership and Diversity Conference.

“I approach graduation confident that I have developed the skills necessary to succeed in my future career as a physical therapist,” Narro says. This fall, she will begin a doctor of physical therapy (DPT) program at Texas Woman’s University at the Texas Medical Center in Houston.

Yaw enrolled at UofSC’s Honors College with a very specific mission in mind: to improve both physical and mental health among veterans. “Veterans are a unique population because they face a plethora of both physical and mental health ailments,” says Yaw, who was inspired by her father’s 30 years of service in the United States Navy. “With my background in exercise science and psychology and as a future physical therapist, I believe that I have the unique opportunity to bridge the gap between mental and physical health treatments.”

Through her coursework, the President’s and Dean’s Lists recipient learned how physical activity can be used to treat the mental health disorders that many veterans face. Building on this foundation, Yaw engaged 200 peers by presenting Post Traumatic Stress Disorder as a public health issue. Outside the classroom, the Truman Scholar Finalist and Who’s Who Student has worked with ROTC students to study the effects of physical activity on depression. As Service Director for Omega Phi Alpha, Yaw led a project to assist homeless veterans and organized students to pass the Green Zone Ally certification program to look out for student veterans.

“This September, I will report to San Antonio to be trained as an Army officer and physical therapist at Army-Baylor DPT’s program and will continue my service to this outstanding group of men and women,” says Yaw. 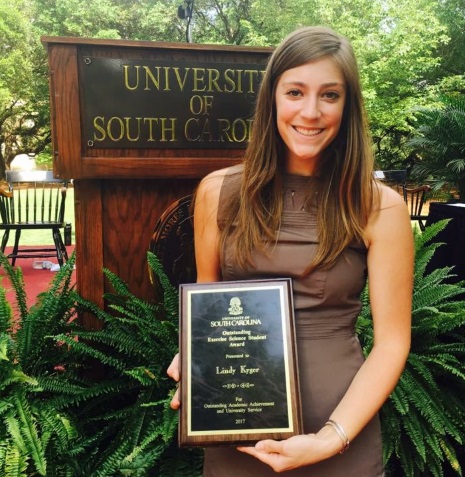 “Being a Gamecock these past four years has given me more beneficial experiences than I can truly explain. My success in the classroom has been a direct result of the support and dedication of my professors in the Athletic Training Program.” -Lindy Kyger, B.S. in Athletic Training 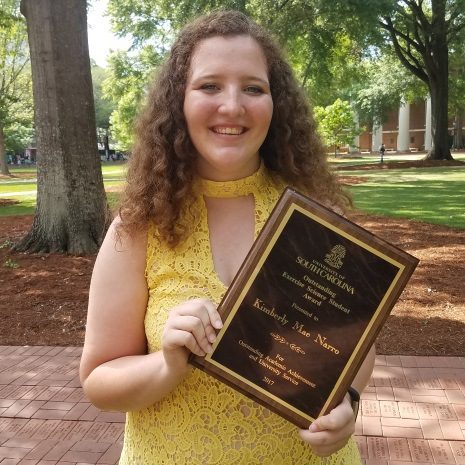 “I went to USC on a gamble, and I’ve wound up winning the lottery thanks to the Department of Exercise Science and peer leadership opportunities. Thank you for providing ample opportunities to allow my Carolina experience to truly have No Limits.” -Kimberly Narro, B.S. in Exercise Science 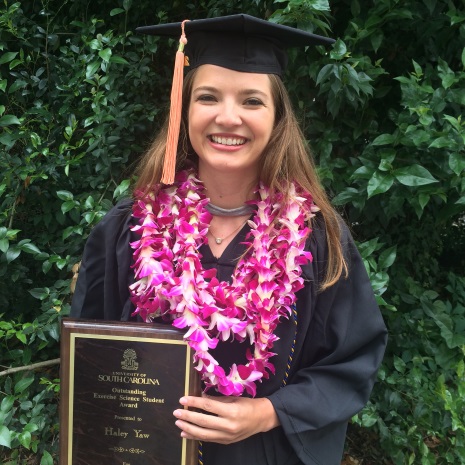 “With support from the excellent faculty and staff within the Arnold School of Public Health and with inspiration from the veteran population in our community, I have learned how to best help our deserving servicemen and women as a future physical therapist.”     -Haley Yaw, B.S. in Exercise science