Exercise science professor and SmartState Endowed Chair of the Technology Center to Promote Healthy Lifestyles (TecHealth) Delia West has received the 2018 Pioneer Award from the eHealth/mHealth Section of The Obesity Society. She was recognized during the organization’s Obesity Week (November 11-15), held in Nashville, Tennessee.

Established in 2012 at the inaugural session of the Society’s eHealth/mHealth section, the Pioneer Award was created to recognize those who have demonstrated a consistent history of excellence in the field. These individuals are known for paving the way for further advancements in the use of electronic and mobile technologies to enhance obesity research, prevention and treatment.

West’s work focuses on technology-assisted lifestyle interventions. She is particularly interested in identifying the most effective approaches to harness the platforms offered by technology to increase access and efficacy of lifestyle programs to promote healthy weight management. Her research translates these interventions into community settings with a focus on underserved populations.

As director of TecHealth, West’s role involves training the next generation of health-technology scholars while conducting research that focuses on implementing and evaluating lifestyle interventions. Designed to promote health and reduce the risk of disease, these interventions feature technology as a central component.

"Delia is a true pioneer in the field of technology-based behavioral weight loss interventions," says Christine Pellegrini, assistant professor of exercise science and TecHealth. "She has substantially contributed to our understanding and knowledge of how best to leverage technology to treat overweight and obesity."

West earned a bachelor’s degree in psychology from Brown University, which she immediately followed with master’s and doctoral degrees in psychology from Rutgers University. During her Ph.D. program, she participated in a Clinical Internship in Health Psychology at the Veteran’s Administration Medical Center in West Haven, Connecticut. Following her 1989 graduation, West completed a two-year, National Heart Lung and Blood Institute-funded postdoctoral fellowship in Cardiovascular Behavioral Medicine at the University of Pittsburgh School of Medicine’s Western Psychiatric Institute and Clinic.

“I think that my psychology training is a natural fit with public health,” says West, who utilizes this background to enhance motivation among individuals to make and sustain healthy lifestyle behavior changes. “I am curious about how people make decisions to engage in specific behaviors and how to  influence them to make healthy behavior changes—as well as identify factors that make health behaviors more difficult. These insights help us tailor treatment to individuals, and we are hopeful that tailoring treatment will make it more effective.”

After completing her educational training, West spent the next decade conducting research at the University of Alabama at Birmingham, followed by another decade as a faculty member at the University of Arkansas for Medical Sciences. It was the move to Arkansas that led her to incorporate technology into her work. West had been doing research on identifying effective behavioral weight management programs when she moved to the rural state.

“Many people had difficulty accessing the programs because of the distance,” she explains. “Technology lets people access effective treatment where they live rather than traveling, which often has its own barriers and challenges. Since then, I have learned that using technology to deliver interventions to people in their day-to-day context can be powerful not just for those who live in rural areas, but for people in general. The key is figuring out what is the best configuration of all the technology choices to get the best weight management outcomes.”

In 2013, West joined the Arnold School’s exercise science department as a professor and as the inaugural director of TecHealth. “I was excited about the vision for the TecHealth Center and the dynamic, talented multi-disciplinary research community at the Arnold School,” she says of her decision to join UofSC. “I’ve been here for five years, and it’s been even better than I had imagined!”

Though the Pioneer Award came as a surprise to West, she has been committed to The Obesity Society since she joined it in 1992. She was elected as a Fellow in 1995 and has served in various roles (e.g., public affairs committee, scientific program reviewer, program committee member) over the years.

“Delia is among a small and elite group of scientists who have led the way for other scholars when it comes to technology-based lifestyle interventions, an interdisciplinary area with great reach that continues to rapidly grow and evolve,” says Courtney Monroe, assistant professor of health promotion, education and TechHealth. “This award is a reflection of her collegiality, mentorship, and passion for helping countless people improve their health and well-being as well as her widespread and lasting impact on this field.”

Founded in 1982, The Obesity Society is the leading scientific society dedicated to advancing the study of the causes, consequences, prevention and treatment of obesity. 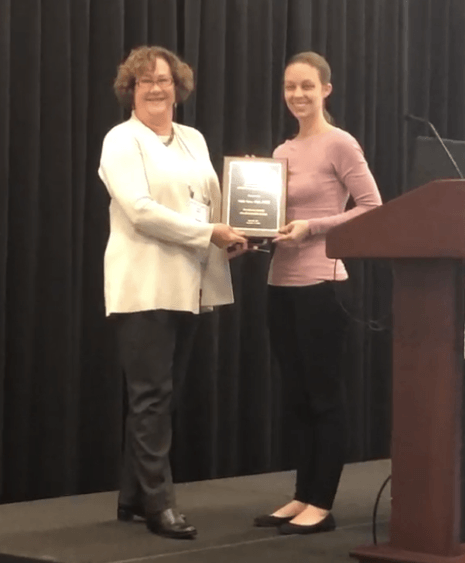 Delia West (left) is a professor of exercise science and the director and Endowed Chair of the South Carolina SmartState Technology Center to Promote Healthy Lifestyles.