Rachel Sharpe, a 2011 alumna of the master of science in advanced athletic training program, has just wrapped up a decade at UofSC. One of the only things that could draw her away from the state and university she loves? A chance to serve as the head athletic trainer for a brand new football team in a brand new league (Alliance of American Football).

“I love USC and didn’t want to leave, but this opportunity felt like the next right thing for me,” says Sharpe.

“I didn’t set out to become the first female head athletic trainer, but once it was offered to me, I knew it could help pave the way for other women,” she explains. “It’s one of those things where if you don’t see something, you might not be able to dream it. Now other women can see it.”

Sharpe is joined by three women in coaching positions as well as many others in various roles from marketing to equipment to human resources. “More females should be able to engage in football in whatever way they like,” she says. “This league has been open to diversity from the start at all levels in typically exclusively male roles.”

For Sharpe, that engagement began early on. She had an active sports life growing up in Jefferson City, Tennessee and was an avid football fan, also playing intramural football as an undergrad. Sharpe’s early career plans focused on becoming a physician, but she wasn’t ready to give up the sports element, and athletic training seemed like the perfect solution.

“There are so many memorable moments from my time at South Carolina but having been gone for just a couple months now, the things I miss most are the relationships."

After graduating from Samford University with a bachelor’s degree in athletic training, Sharpe began looking for graduate programs that would connect her with opportunities to work with football programs. UofSC’s master of science in advanced athletic training program (which was a part of the College of Education until it joined the Arnold School of Public Health’s exercise science department in 2016) came with a graduate assistantship working with football programs, and she jumped on the opportunity.

Through her academic program, she met athletic training associate professor and graduate program director Toni Torres-McGehee, who played a significant role in both Sharpe’s graduate school experience and her career at UofSC.  Working alongside Torres-McGehee, Sharpe was able to have a role in developing and facilitating a new skills class for the graduate program.

“She always encouraged me in my desire to work in football and even recently sent me an inspiring text as I left for my new position reminding me ‘you are ready for this',” Sharpe says. “She is an incredible collaborator and resource in working toward better mental healthcare for student athletes. Overall, I have felt overwhelmingly supported by her for my entire career including now.”

Sharpe spent the first year of her master's program working with the USC football team and the second year with a local high school football program. After her 2011 graduation, the USC football team hired her as an assistant athletic trainer, and she remained there until December of 2018 when she transitioned to her new position with the Atlanta Legends.

“I took this job in large part for student athletes and for my students. I wanted to do my part to create something that gave more of my guys the opportunity to play more football...And to pave a way for my female students who dream of a place in football. I want to help create space for them.”

“There are so many memorable moments from my time at South Carolina but having been gone for just a couple months now, the things I miss most are the relationships,” Sharpe says. “Having the opportunity to be a part of our athletes' lives was an incredible privilege that I did not take lightly. I hope I taught them as much as they taught me.”

In her new role, Sharpe does many of the same activities she’s always done: taking care of athletes, addressing all of their healthcare needs (e.g., serving as a liaison between players and physicians), rehabilitation, etc. Now that she is a head athletic trainer, for a new team in a new league, she’s taken on other responsibilities as well.

There’s a lot more administration-level work and a lot more decision making. In addition to coming up with creative solutions to unexpected logistical challenges, Sharpe also oversees her own team: a physical therapist/athletic trainer and two other athletic trainers, including fellow 2011 graduate Daniel McAdams who worked alongside Sharpe as a graduate assistant for the USC football team during their master’s program.

Fortunately, her academic program, its clinical rotations, and her eight years with the USC football team helped prepare Sharpe for this role. But she’s also thinking about how her new position will impact others.

“I took this job in large part for student athletes and for my students. I wanted to do my part to create something that gave more of my guys the opportunity to play more football...like Rory Anderson, Devin Taylor, Ronald Patrick and Elliott Fry right now,” says Sharpe. “And to pave a way for my female students who dream of a place in football. I want to help create space for them.” 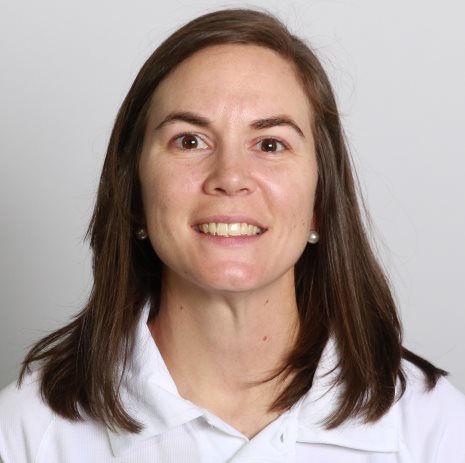 Rachel Sharpe is a 2011 graduate of the master of science in advanced athletic training program and the head athletic trainer for the Atlanta Legends, a team in the recently established Alliance of American Football.