Physical therapist returns to school to focus on prevention and behavior change with Ph.D. in Health Promotion, Education, and Behavior

Polish by birth, Basia Bujak had no idea that her future held a lifetime of U.S. military service when she moved to Key West, Florida at the age of 12. After finishing high school, she moved to New York to study clinical science at Ithaca College – joining the U.S. Army following her 2005 graduation.

Bujak completed the U.S. Army – Baylor University Doctor of Physical Therapy program in 2008, which included an internship at a medical center in Germany. She stayed on as a staff physical therapist for another three years, where she also served as an interpreter for NATO Coalition wounded military service members from Poland who were treated there. During this time, she deployed to a combat support hospital in Baghdad as a part of Operation Iraqi Freedom.

Upon returning to the United States in 2011, Bujak served as Chief of Physical Therapy and Detachment Commander in Arlington, Virginia and then as a Brigade Physical Therapist at Fort Bragg in North Carolina. In 2015, she was one of two Army physical therapists selected to participate in the Army’s Long Term Health Education Training (LTHET) Program.

Through the fully-funded program, Bujak had three years to complete a Ph.D. in a program related to health promotion and behavior change. The Arnold School’s Ph.D. in Health Promotion, Education, and Behavior fit the criteria perfectly and was touted by previous LTHET students. As a bonus, Bujak had the opportunity to gain teaching experience in the Department of Exercise Science’s Doctor of Physical Therapy program during her studies.

The military’s current focus is to improve readiness by doing more preventive care and education so the field of public health was a natural choice.

Her interest in returning to school stemmed from her experience treating soldiers with acute or chronic overuse injuries, some of which could have been prevented through health promotion and injury prevention education and practices.

“I became more interested in proactive rather than reactive medicine and looking at ways to improve the health of soldiers before they need to seek healthcare,” Bujak says. “The military’s current focus is to improve readiness by doing more preventive care and education so the field of public health was a natural choice.”

Despite their differing backgrounds, she connected with committee chair and advisor Christine Blake, who researches nutrition but nevertheless turned out to be an excellent fit. “Dr. Blake has been amazing and always believed in me, especially in times of significant doubt,” she says. “I learned a lot about nutrition and she introduced me to qualitative research methods, which I ended up using for my dissertation.”

“Basia approached the challenge of graduate school with curiosity, tenacity and humility,” says Blake. “I was honored to work with Basia over the past three years and will miss our regular research meetings. Instead I now look forward to reading about her successes.”

She also found a mentor in HPEB assistant professor and committee member Courtney Monroe, who encouraged Bujak to include technology in her research as well as to become a better writer. From the DPT program, Bujak received guidance from clinical professor Paul Beattie and clinical associate professor Shana Harrington.

UofSC is known to support military service members and veterans, and I have experienced it first-hand.

Outside of her academic program, Bujak served as Secretary of Veterans Affairs for the Graduate Student Association and collaborated with UofSC’s ROTC program, educating more than 200 cadets on holistic health and fitness to optimize their leadership potential as future military officers. In addition to teaching for the DPT program, she served on the admissions committee. Earlier this year, she was inducted in to the Delta Omega Honorary Society for Public Health. During this time, she also served as an assistant investigator on a grant application related to stress fracture recovery for returning to duty that was recently funded with nearly $3 million by the Department of Defense.

“I am thankful for my experience at UofSC,” Bujuak says when reflecting on the last three years. “It has been an amazing – and at times a very stressful – time and it would not have been possible without the support and accommodations for my condensed timeline from HPEB, Arnold School and UofSC staff and faculty. UofSC is known to support military service members and veterans, and I have experienced it first-hand.”

After her August graduation, Bujak will be assigned as the military deputy to the Clinical and Rehabilitative Medicine Research Program, which manages a core research program executed by the Department of Defense laboratories and medical centers as well as by external university, industry and other partners. She’ll spend three years with the program at Fort Detrick in Maryland before moving on to another assignment with the Army –in a clinical, research or leadership position.

“There are many routes you can take in public health so no matter what your specific interests are, you can probably link it to public health,” Bujak says. “With an increasing number of health issues in the population, there is a lot of work to be done and we need to be more proactive rather than reactive.” 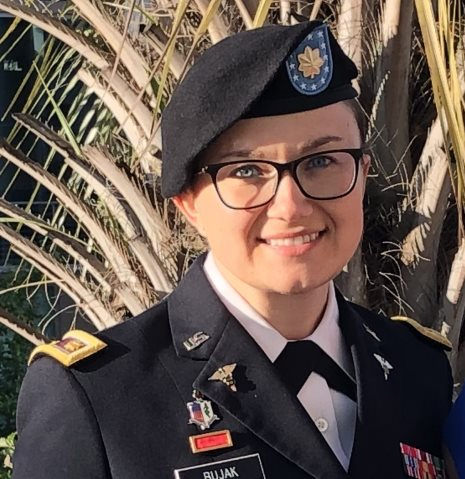 Basia Bujak is a physical therapist who completed a Ph.D. in Health Promotion, Education, and Behavior through the Army’s Long Term Health Education Training Program.