Each year, the Graduate School awards five different Trustee Fellowships to full-time graduate students who exhibit excellence in graduate study, research and scholarship. Mithun Sikder, a May doctoral graduate in the Department of Environmental Health Sciences (ENHS), was selected to receive the George M. Reeves Graduate Fellowship, which is named for Reeves, who formerly served as UofSC’s director for the Lilly Teaching Fellows Program, senior assistant to the President and Dean of the Graduate School.

Originally from Bangladesh, Sikder studied civil engineering with a focus on water quality and pollution control at Bangladesh University of Engineering & Technology. He then completed a master’s degree in environmental engineering at the University of Nottingham (United Kingdom), where he delved deeper into water treatment processes using nanotechnology.

We must protect our environment and it’s our duty to make it a better place for the future generations.

“My inner voice told me to pursue research focusing on the environment, public health and nanoparticles,” Sikder says of his next steps following his master’s graduation in 2013. “When I was looking at different programs around the globe, I found out about the research faculty were doing in the environmental health sciences department and to be specific in the Center of Environmental Nanoscience and Risk (CENR).”

CENR’s research was a perfect match for Sikder’s interests, so he accepted a position working on associate professor Mohammed Baalousha’s National Science Foundation-funded research project as soon as it was offered.  He was also drawn to UofSC because of its cultural diversity, overall research opportunities and community engagement.

Since joining his department’s Ph.D. program in 2015, Sikder has continued refining his research interests to eventually focus on the role of size and concentration of natural organic matter on the fate, behavior and toxicity of nanoparticle in aquatic environments for his dissertation project. He also had the opportunity to intern for the U.S. Geological Survey, which added a new dimension to his career.

“This experience was not only invaluable for my dissertation research completion, it also gave me another inside view of how U.S. governmental research works,” he says. “I am still in awe of how this lab worked together in every aspect to complete this project.”

During his program, Sikder published seven papers in peer-reviewed journals (with another handful in preparation) and presented at 13 international conferences—all while maintaining a 4.0 GPA. In addition to the Reeves Fellowship, he is a Norman J. Arnold Fellow and received his department’s doctoral award at the May 2019 Arnold School Hooding Ceremony. Sikder has relied on his own motivation to achieve these accomplishments, but he also credits his mentors — Baalousha, Dean Thomas Chandler and CENR director Jamie Lead – for their influential roles in his UofSC experience.

The opportunities the CENR, ENHS and the Arnold School gave me are enormous. I not only collaborated with other researchers within the university, but also researchers around the globe.

“Dr. Baalousha’s contribution, as a major professor and mentor, is instrumental in my development as a scientist. He always encouraged me to achieve higher and maximize the academic and professional opportunities during my Ph.D. and gave me the freedom to fail and learn from the mistakes during the research,” Sikder says. “Dean Chandler literally taught me the toxicological bioassay from scratch, given that my previous education focused on environmental engineering. I loved the passion and extensive knowledge of Dr. Chandler brought to the subject, and I knew it is an amazing opportunity to work with such an influential person to the field of toxicology.”

Now that he has graduated, Sikder plans to pursue a career as an educator and researcher in the field of environmental health sciences beginning with a postdoctoral fellowship. He’s particularly looking forward to extending his research on nanoparticles’ fate and behavior in the environment and their subsequent effects (i.e., toxicity) on human and environmental health.

“We must protect our environment and it’s our duty to make it a better place for the future generations,” Sikder says. “The opportunities the CENR, ENHS and the Arnold School gave me are enormous. I not only collaborated with other researchers within the university, but also researchers around the globe. These experiences have molded me as a scientist and have been crucial in my career path decisions.” 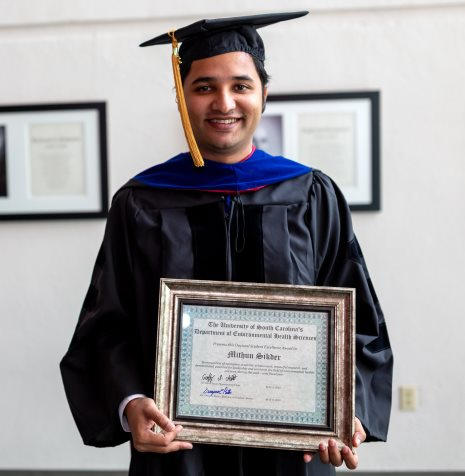 Mithun Sikder graduated in May with a Ph.D. in Environmental Health Sciences. He received UofSC's Reeves Fellowship and his department's doctoral award.