In 1988, public health faculty at the University of South Carolina came together with state agency representatives and community partners to establish a Dementia Study Center to serve as a research hub in support of the nation’s first statewide Registry for Dementing Illnesses. That pioneering work paved the way for what is today the Arnold School of Public Health’s Office for the Study of Aging, which serves as the home for what is now known as the South Carolina Alzheimer’s Disease Registry.

To this day, 30 years later, the South Carolina Alzheimer’s Disease Registry remains one of only three population-based registries in the country (West Virginia and Georgia have registries), and it’s the most comprehensive of its kind. The purpose of the Registry is to collect information on Alzheimer’s and related dementias (ADRD), provide disease prevalence estimates (including differences among demographic groups) to enable better planning for social and medical services, identify resources for caregivers and family members, and foster research into relevant risk factors.

“One of the qualities that makes our Registry unique is its legislation,” says research assistant professor and Registry Manager Maggi Miller. "In 1990, just two years after its inception, the registry was formally authorized in state law. The legislation grants permission to identify cases of ADRD from existing sources and allows cases and caregivers to be contacted to gather additional information.”

South Carolinians need programs and services that support both individuals with ADRD and their caregivers. Community efforts to support those living with ADRD, their caregivers, and the aging population require a strong evidence base. Legislators and community organizations can use Registry data to stay up-to-date on the latest ADRD statistics in order to best serve the community. Registry data is also being used to answer a variety of research questions and is available for public use upon request. Researchers can have access to this unique resource to increase understanding about ADRD.

The Office for the Study of Aging, in close collaboration with the Department of Health and Human Services and the Revenue and Fiscal Affairs Office, uses the rich, diverse collection of data housed in the Registry to produce an annual report (see 2018 Annual Report). This report offers a wide range of research, evaluations, programs and training opportunities that address the needs of older South Carolinians and their families.

These resources are needed now more than ever as South Carolina and the nation experience unprecedented increases in ADRD diagnoses in parallel with the growth of the older adult (65+) segment of the population. According to the Alzheimer’s Association, for example, deaths from Alzheimer’s disease increased by 123 percent nationwide and 181 percent statewide between 2000 and 2015.

Today, ADRD affect 11 percent of South Carolinians ages 65 and older and 44 percent of those over 85. Recently released data reveal that our state now has the highest Alzheimer’s disease mortality rate in the United States (see article in Post & Courier with comments from Office for the Study of Aging associate director of research Mindi Spencer). ADRD are the sixth leading cause of death both in the United States and in South Carolina, with one in three seniors dying with one of these diseases.

This year, caring for the 5.7 million Americans with ADRD will cost an estimated $277 billion. Those numbers are projected to rise to nearly 14 million individuals and as much as $1.1 trillion in healthcare and caregiving costs by 2050.

The Alzheimer’s Disease Registry is essential to our collective efforts in combatting this pervasive public health issue and tracking the impact of ADRD on our state. With over 93,000 South Carolinians living with ADRD, it is critically important to continue to highlight this disease and to raise awareness regarding those who are living with the disease and those who are caring for them. In South Carolina alone, more than 300,000 individuals are serving as unpaid caregivers for individuals living with Alzheimer’s disease.

The Registry is an important resource for our state in addressing ADRD, and the Office for the Study of Aging continues to promote the availability and effective utilization of this valuable asset. For more information on the South Carolina Alzheimer’s Disease Registry, contact Office for the Study of Aging Registry manager Maggi Miller at chandlmj@mailbox.sc.edu or 803-777-0214. 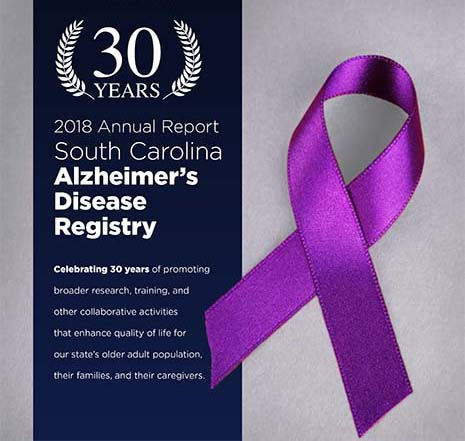 View the 2018 Annual Report for the most recent full year of data available from all reporting sources.

Additional Information from the Alzheimer's Association