Norman J. Arnold was born in Charleston in 1929 and moved to Columbia as a young child. After graduating from Oglethorpe University in Georgia, he joined the family business, which was founded by his grandfather in 1907 and named for Mr. Arnold’s father, Ben Arnold. Norman Arnold immersed himself in what is now known as The Arnold Family Corporation for his entire career, pausing only to serve as a naval officer for four years during the Korean War.

Due to his father’s early and unexpected death, Mr. Arnold was interested in cardiovascular health. He served as chairman of the Richland County Heart Fund and served on the board of trustees of Providence Hospital, a major force in heart health in the Midlands. He also served on the Board of the Medical University of South Carolina Cardiovascular Institute for Research and Prevention.

In 1982, Mr. Arnold experienced his own health scare when he was told he had six months to live after doctors discovered he had pancreatic cancer. He credited a healthy new diet, strong family relationships, exercise and an optimistic attitude for saving his life. Eighteen months later, he was completely cancer free.

Renamed the Arnold School of Public Health, the School was the first school of public health at a public institution to have the honor of becoming a named school. It has since risen to become one of the most productive and well-recognized public health colleges in the nation. The endowment has notably supported more than 100 doctoral students as Norman J. Arnold Doctoral Fellows in Public Health.

In 2006, the Arnolds made an additional gift to establish an awards program to honor outstanding alumni of the Arnold School.  For his tireless work in community and civic improvement, in 2010, the University of South Carolina presented Mr. Arnold with an honorary doctorate of humane letters during the winter commencement exercises.

Then, in 2015, as the Arnold School marked its 40th anniversary, the Arnolds further strengthened their commitment to the mission of public health with another $7 million gift to create the Gerry Sue and Norman J. Arnold Institute on Aging within the School. Per the Arnolds’ wishes, the Institute promotes healthy aging across the lifespan by addressing issues such as children/adolescent obesity prevention, nutrition and food safety, chronic stroke recovery, Alzheimer’s disease, and dementia—all public health challenges that affect our two most vulnerable populations: children and older adults.

In addition to being an influential business leader, a loving father to his three sons and a devoted husband to his wife of more than 50 years, Norman J. Arnold will be remembered for his tireless commitment to improving health and education with his numerous philanthropic endeavors.  Mr. Arnold’s legacy and dedication to improving public health will live on through the many important research and scientific breakthroughs he has funded at the Arnold School, as well as through the large community of faculty, staff, students and alumni that he has supported for more than 16 years with his generosity.

Memories and Appreciation from the Arnold School Family

"I met Norman Arnold over green tea when I was Dean of the School of Public Health. Over the years, his passion for improving the health of all people never waned. We have lost one of the true 'greats,' but his and Gerry Sue Arnold’s efforts will continue to have impact."

-Harris Pastides, President of the University of South Carolina

“As an Arnold fellow, I have had the opportunity to not only obtain a solid education, but also to commune with faculty and students who are all hoping to make a difference in their fields. Being able to learn alongside like-minded peers has been such a valuable experience that I would not have had without Mr. Arnold's donations. I believe that as an Arnold fellow, it is now my job to pass that generous spirit along through the work I hope to take on in the future.”

"I think my most vivid memory of Mr. Arnold is from the morning of the Arnold School of Public Health's 30th Anniversary celebration. We were on a tour of the flora, fauna, and animal life of the Horseshoe that Rudy Mancke had graciously agreed to conduct for our alumni and guests. Unexpectedly, Mr. Arnold took me by the arm and led me away from the group so we could talk privately. This was the moment when he revealed his intention to expand his generosity to the school to include the provision of awards for aulmni of the Arnold School. These awards were created by Mr. and Mrs. Arnold to recognize significant contributions to the field of public health. Wisely, the Arnolds designated two different alumni awards, one recognizing accomplishments by a recent graduate and one for a graduate later in his/her career progression. I was very impressed by the fact that the art of giving was simply a part of the Arnolds' DNA. They kept doing more!"

“One of my favorite activities as Dean of the Arnold School has been my regular visits with Norman and Gerry Sue at their home for a glass of red wine – ‘because red wine promotes heart health, Tom’ -- to provide updates on how and what the School has been doing. Norman was so supportive of me and the work of the School. He was expert at motivation; always knew what to say with encouraging words; and loved to talk most about the good things faculty and students were doing in disadvantaged communities around Columbia, and also what else we could be doing. Norman and Gerry Sue have always had high interest in improving the health status of vulnerable and disadvantaged populations, and they have backed that interest with major and frequent monetary gifts dispersed throughout the Columbia community and beyond. In those seven years of visiting their home, I never left without Norman and Gerry Sue asking me ‘what more can we do to help you Tom?  What more does the School need?’ I doubt I will ever meet another more generous and caring human being than Norman J. Arnold. I am truly blessed to have known his example first hand, his friendship, and especially his frequent encouragements. He was so very proud of his School.”

“The Norman J. Arnold Endowment has greatly impacted my growth as an academic scientist. The assistance I received while an Arnold Fellow assisted in the development of research projects that led to the procurement of both internal and external funding. The results from these projects have been presented at several regional and national conferences. These opportunities would not have been possible without the training and guidance I have received as an Arnold Fellow within the Arnold School of Public Health. I am truly grateful for the initial and sustained contributions of Norman and Gerry Sue Arnold, for their generous gifts have greatly enhanced my experiences as a doctoral student within the Arnold School.”

“If I had not received the Arnold Fellowship, I probably wouldn’t have pursued my doctoral degree. The generous support encouraged me to go after my goal, and I am so thankful to have had this opportunity and experience. The opportunities to learn, network, and be involved with the excellent public health research at the Arnold School of Public Health has been incredible and has helped me grow both personally and professionally. My experiences here have cultivated even more of a passion to create healthier communities. Being an Arnold Fellow has set a foundation for what I hope is a long and impactful career in public health.”

"Mr. Arnold's interest in the field of public health was quite personal and sincere. He had been a pioneer in introducing the macrobiotic diet to Columbia. His natural interest in various aspects of the multi-faceted public health field and his own scientific curiosity were evidenced by his occasionally sending me articles he had read about various new advances in the field through research. He really paid attention to what was going on at the cutting edge of science and he always wanted to learn about the research being conducted in the Arnold School."

“As a recipient of the Norman J. Arnold Doctoral Fellowship, I have been directly impacted by the Arnolds’ generosity.  I was deeply honored to be selected as a recipient of the award, and I wish to express my sincere appreciation and gratitude for the Arnold Fellowship gift. For me personally, the Arnold Fellowship has lightened the financial burden of graduate school and allowed me to focus on the more important aspects of my education. Specifically, I have been able to dedicate more time and focus to developing my skills as a public health researcher.” 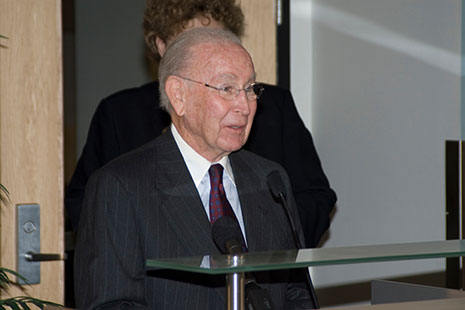 Norman J. Arnold’s (1929-2016) generosity to the University of South Carolina's Arnold School of Public Health has improved the health of South Carolinians and beyond. His legacy lives on through the work of the faculty, staff, students and alumni that his gifts continue to support.

Norman J. and Gerry Sue Arnold have been devoted to supporting past and future teaching, research, and public education efforts of the Arnold School of Public Health since 2000.

“(USC) has risen in status amongst universities and has made a big difference in the state of S.C. overall and we just feel like we’re grateful to be included in doing our part to help...The University has gotten better with age and the great leadership we’ve been blessed with.” -Norman J. Arnold

“It’s just amazing. We’ve seen such tremendous growth in all the departments and particularly, we take such pride in all the research that’s being done and the quality of the faculty that we have.” -Gerry Sue Arnold

“The School’s accomplishments have far exceeded my expectations. The faculty and staff are geared now especially to do some really great things as they have done some excellent things in the past.”
-Norman J. Arnold