Communication Sciences and Disorders (COMD) Professor Julius Fridriksson recently wrapped up year one of his $11.1 million P50 NIH grant to establish and support the Center for the Study of Aphasia Recovery (C-STAR). He has spent the past 12 months building the Center and initiating its in-depth research studies, which aim to result in customized treatment plans for patients with chronic aphasia—a communication disorder resulting from stroke or injury to the brain that impacts patients’ ability to speak, listen, read, and/or write but not does not affect their intelligence.

In parallel with advancing aphasia assessment and treatment through this research, C-STAR has also made strides in connecting stroke researchers, clinicians, caregivers, and patients over the past year. Organized by Associate Professor and C-STAR Co-investigator Dirk den Ouden, the C-STAR Lecture Series provided talks by members and guests of the Center throughout the 2016-2017 academic year.

All connected to stroke recovery and aphasia, these lectures included topics such as rehabilitation after stroke, neuroimaging methodology, speech-motor rehabilitation, emotional impacts, and the neurobiology of language. Presenters ranged from postdoctoral fellows to stroke survivors to clinicians to internationally renowned scientists in the areas of psychology, aphasia, linguistics, and other topics.

One of the lectures was given by Thomas Broussard, a stroke survivor who lost the ability to read, write, or speak well due to a stroke in 2011. A recent Ph.D. graduate at the time, Broussard was determined to understand what was happening to him. He kept a diary using drawings, charts, and graphic representations. After writing in his diary, recording his voice, and studying his own brain for 11 months, he not only regained his full awareness but he also developed additional insight into his condition. Broussard describes his road to recovery in the published trilogy, Stroke Diary.

Another popular lecture was given by Professor Cathy J. Price, an internationally renowned scientist who studies how speech and reading are lost and recovered after developmental delay or neurological damage. Her well-attended talk focused on language recovery after stroke. Specifically, Price described how neural systems can functionally reorganize themselves after damage and explained why this reorganization process might be faster for some patients than others.

The goal of the lectures series is twofold: 1) to provide the latest information on stroke recovery practice and research and 2) to share that information in a way that is accessible and relevant to diverse audiences.

As expected, some of the lectures are technical in nature. Others are tailored to stroke survivors and their family members. Broussard’s lecture even offered free continuing education units for speech-language pathologists—a benefit that C-STAR would like to repeat more often during the 2017-2018 lecture series. They would also like to increase student participation during the second year of lectures to help these future clinicians and researchers broaden their understanding of the COMD field.

While the in-person lectures provided refreshments for those who attended in person, one of the biggest draws of the 2016-2017 lectures was the availability of the lectures online in real time. By streaming the lectures live, C-STAR was able to engage many additional stroke and aphasia rehabilitation advocates. The videos were then combined with the presentation slides to establish an archive of videos available to watch or re-watch at any time. Hosted on YouTube, these videos have been viewed by individuals from more than 70 countries around the world—extending the reach of the C-STAR lecture series well beyond South Carolina.

The C-STAR Lecture Series will return in August 2017. You can find the abstracts and videos of the 17 different 2016-2017 lectures here. If you have questions or suggestions for future speakers or topics, please contact Associate Professor and C-STAR co-investigator Dirk den Ouden at denouden@sc.edu or 803-777-9241. 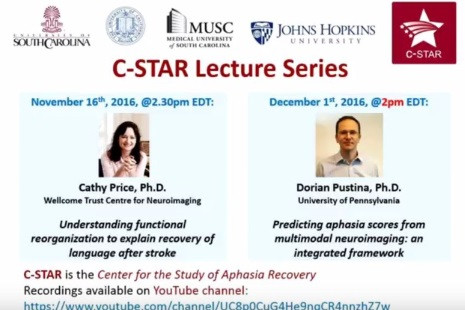 Cathy J. Price is a professor and director at Wellcome Trust Centre for Neuroimaging. Her C-STAR Lecture focused on language recovery after stroke. 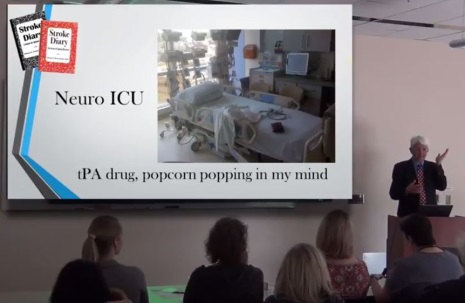 Thomas Broussard is a stroke survivor and stroke educator who has published his journey to recovery in the trilogy, Stroke Diary. His C-STAR Lecture focused on rehabiltation and recovery from novel therapy.