Jourdyn Lawrence is devoted to eliminating racial health disparities and has been active in research addressing socioenvironmental sources of such inequities. Her journey began in Georgia, about 30 minutes south of Atlanta where she earned a bachelor’s degree in biology from Clayton State University.

It was during this time that Lawrence was introduced to epidemiology by her undergraduate professors when teaching students about microbiology and virology. With their help, Lawrence conducted research on garlic’s ability to combat the development of biofilm in hospital-acquired infections and sat in on public health classes at nearby universities.

“After being exposed to public health and learning more about its importance in our day-to-day lives, I was hooked,” says the Master of Science in Public Health in Epidemiology graduate who will begin her Ph.D. in Population Health Sciences at Harvard University this fall. “There are so many things we don’t think of as being related to or direct products of public health prevention and awareness efforts.”

Once Lawrence realized what she was passionate about, she continued to seek out assistance in achieving her goals. “Things have truly come full circle in my life, and I am amazed at the person my family, mentors and friends have helped me to become,” she says.

The same professors who introduced Lawrence to epidemiology and public health later helped her identify potential graduate programs. On the short list? The Arnold School of Public Health at the University of South Carolina.

During her campus visit to UofSC, Lawrence met Dana Klinepeter, Student Services Program Coordinator for the Department of Epidemiology and Biostatistics. “She provided me a wealth of knowledge about the department, coursework and rigor of the program,” says Lawrence. “We spoke in great detail about the availability of classes and faculty in my areas of interest. Dana also reassured me of the faculty’s commitment to student education and development.” By the end of the meeting, she had made her decision.

Once she began her program, Lawrence found other sources of support within the department. “Dr. Linda Hazlett is truly a gem of the epidemiology and biostatistics department,” Lawrence says of the graduate director. “She genuinely cares about all of the students and their success. Her support really contributed to my wellbeing.”

The 2017 Epidemiology Master’s Student Award winner also developed her areas of interest within the field of social epidemiology. Specifically, her interests lie in social determinants of health, race, racial health disparities, discrimination, and chronic diseases. In researching these topics, she teamed up with Associate Professor of Epidemiology, Kellee White.

“I don’t think words can adequately convey the impact that Dr. White has had on me, both professionally and academically,” Lawrence says of her mentor and the skills she has developed as White’s graduate research assistant. “Her work ethic and dedication are incomparable. She gives 110 percent, and it rubs off on you.”

In addition to serving as a role model, White proved to be an unwavering source of support through the decisions and challenges Lawrence faced. “Dr. White also encouraged me to take advantage of every available opportunity, such as presenting at conferences and writing papers for publication,” Lawrence adds. “She assured me that anything is possible when you put forth your best effort. I have a deep respect for her, and I’m very grateful for all that she has taught me.”

With White, Lawrence assisted in the development of several manuscripts and presented at professional and academic conferences on the topics of their joint interest. She plans to build on their work during her doctoral program by further exploring the effects of social class, racial discrimination, and external classification of race on health. Additionally, she hopes to identify the mechanisms through which these factors exacerbate health inequities.

“I enjoy being in an academic environment,” Lawrence says of her decision to pursue a career in higher education. “In addition to conducting research that will impact marginalized communities, I hope to assist in the development of future researchers. My professors and mentors have had a vital role in my journey, and I am passionate about paying it forward.” 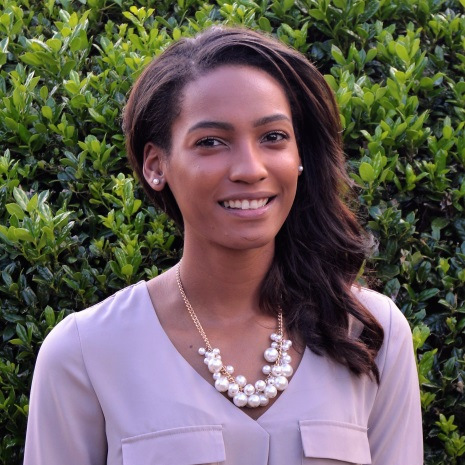 Jordan Lawrence graduated in May with a Master of Science in Public Health in Epidemiology. She will begin her Ph.D. in Population Health Sciences at Harvard University this fall.