Mindi Spencer is beloved by students. The 2017 Michael J. Mungo Undergraduate Teaching Award winner has the respect of countless undergraduates for the inspiration she cultivates in her classroom. She also forms tight bonds with the graduate students she mentors. Dubbed “Club 311” (after the room number that housed her office when it all began), Spencer has a dozen or so current and former graduate students–the self-proclaimed “Club 311 Ducklings”–with whom she has forged lifelong relationships. They meet at conferences and other events and stay in touch via twice monthly group calls.

In addition to her effective teaching methods, it’s likely Spencer’s passion for public health and social justice that proves contagious to students at all levels. She pushes her students to resist any and all forces which compromise the health of the nation–a nation which she firmly believes is strengthened by its diversity. It is through her research and service that Spencer has demonstrated her zealous commitment to the health of the Lesbian, Gay, Transgender, and Bisexual (LGBT) population.

Her work focuses on the regional context of health disparities for this group. In other words, what is it like to be LGBT in the American South? “It’s a different experience than it is elsewhere,” she explains. “Working at the Institute for Southern Studies has provided me with a new appreciation for the power of place."

“From my community-based work, I have witnessed how developing in the South impacts LGBT-related stigma," she addds. "The region’s conservative values, higher poverty rates, and discriminatory policies combine to create a ‘perfect storm’ of stress for this population." Taking a regional approach to health promotion has strengthened the local relevance of her work in a geographical area that has not been adequately studied in the literature on LGBT health.

It was only last year that the National Institutes of Health finally acknowledged the LGBT community as a health disparity population. It’s a long overdue but much needed designation for researcher-advocates like Spencer, who first discovered her passion for LGBT health disparities 20 years ago.

Spencer grew up in West Virginia, the only state which is entirely situated in the Appalachian region and known for its poor health. “I have always been interested in health equity but grew up in a state that was predominantly rural and white,” she says. “It didn’t exactly allow for me to examine racial and ethnic disparities in my home state, so working with the LGBT population made the most sense.”

Spencer was admitted to West Virginia University at the age of 16 and earned a bachelor’s degree in biology. She immediately followed up with back-to-back master’s and doctoral degrees in lifespan developmental psychology from the same institution. She spent the next two years as a Kellogg Health Scholar at the University of Pittsburgh’s Center for Minority Health and Department of Epidemiology. She then joined UofSC as an assistant professor of health promotion, education, and behavior in 2008, with a joint appointment in the Institute for Southern Studies.

In her LGBT work, the 2015 Stand Up Carolina Hero has devoted her career to improving health across the lifespan, which includes strengthening the structure and function of social support systems for LGBT persons. “Unlike racial/ethnic minority groups, LGBT individuals represent the only minority group that is organized horizontally, meaning that they grow up not being able to readily identify other group members,” says Spencer of the early struggles of LGBT children youth. “And there’s a reason why this group has high disparities as they age. They have higher rates of smoking and disordered eating, for example, largely because of stress due to experiences of discrimination. As long as structural stigma exists in health and social services, the quality of life of all LGBT individuals will be compromised.”

On the other end of the lifespan, Spencer points out that the notion that LGBT adults are depressed and alone is simply not true. “It’s a myth,” she says. “After they grow up, LGBT individuals create communities of their own by developing strong ‘families of choice’ who provide support.”

But older LGBT adults do face challenges. Spencer notes that they might not have children to help them, and those who end up in care facilities that are not culturally competent often feel forced back into the closet after living for decades as their authentic selves. “These are the founders, the ones who paved the way for marriage equality and other advancements for LGBT individuals and our society,” says Spencer. “If we fail to acknowledge such an important segment of the older population, we are remiss as public health professionals.”

In her LGBT work, Spencer frequently partners with the Harriet Hancock LGBT Center. Based in Columbia, this volunteer-run, non-profit organization is the hub of LGBT activity in the Midlands.

Coordinated by current Club 311 doctoral student Shehan Welihindha, Spencer and the Center conducted a statewide needs assessment of 1,100 South Carolinians who self-identified as LGBT to learn more about health care gaps and priorities. She also served as one of the principal investigators of the Youth Empowerment Against HIV! (YEAH!) project.

With a grant from the South Carolina Department of Health and Environmental Control, Spencer worked with South Carolina Equality to develop and implement a cultural competency course for public health professionals known as Equalize Health. This training aims to teach public health practitioners how to be more inclusive and provide higher-quality care to their LGBT clients.

On a broader scale, Spencer travels around the country to speak on panels about LGBT health issues. Once again pairing her aging and LGBT work, Spencer spoke on the keynote LGBT panel at the Southern Gerontological Society’s annual meeting. In June, Spencer traveled to Houston with a former doctoral student and USC graduate, Stacy Smallwood, for the 15th Annual Disparities in Health in America: Working Toward Social Justice Workshop and witnessed another overdue milestone.

“This was the first year where LGBT was a major focus of the workshop, and there was a great response,” says Spencer, who also met up with other Club 311 graduates in Houston who, not surprisingly, share her passion for eliminating health disparities. “The LGBT focus highlighted how intersecting identities, such as being an African American gay Christian man in the South, impact minority stress, how a person reacts to their environment, and vice versa.”

And despite the fact that the workshop is located across the country, Spencer was still in her sweet spot: mentoring students and discussing ways to eliminate health disparities across the lifespan for the LGBT population in the South. 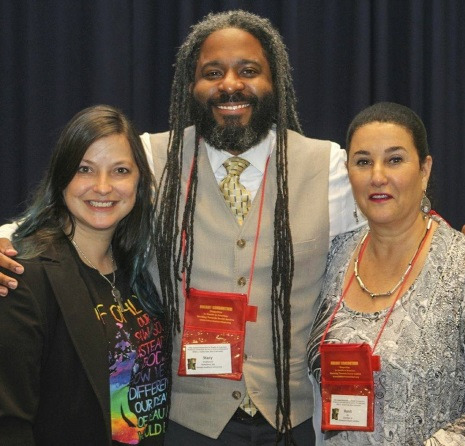 Mindi Spencer (picture left with former student Stacy Smallwood and Nursing Associate Professor Ronit Elk at the 15th Annual Disparities in Health in America: Working Toward Social Justice Workshop in Houston) pushes her students to resist any and all forces which compromise the health of the nation–a nation which she firmly believes is strengthened by its diversity.