The recession was just getting started when Jóhann Fridriksson and his wife, Erla Hafsteinsdottir, moved to the United States in 2008. Previously a teacher, Hafsteinsdottir’s desire to become a speech-language pathologist brought them to UofSC, where she would earn her master’s degree from the Arnold School’s communication sciences and disorders (COMD) department.

Fridriksson had a background in politics in the couple’s native Iceland where he served as regional director as well as an editor of a local newspaper. He knew he wanted to continue to advocate for others and make a difference in his community, but he wasn’t sure what shape those aspirations would take until he began completing prerequisite courses for his undergraduate degree.

“Public health is linked to so many aspects of our lives and plays a major role in our prosperity for the long run,” he says of his decision to pursue a career in the field. “For me, public health is not only about preventing disease but also setting the public agenda to promote well-being for all people.”

During his bachelor of arts in public health program, Fridriksson quickly became interested in health promotion, education, and behavior (HPEB) and began prepping to apply to the department’s master of science in public health program. He was particularly focused on human behavior and neuroscience, a topic he shares in common with his older brother, COMD professor and aphasia researcher Julius Fridriksson.

Public health is linked to so many aspects of our lives and plays a major role in our prosperity for the long run.

To gain insight into both cognitive and behavioral science during his master’s program, Fridriksson worked as a research coordinator at USC’s McCausland Center for Brain Imaging and as project manager for the Institute for Mind and Brain. He also studied with HPEB professor Jim Thrasher, whose international research and policy work on tobacco control/cessation and health communication, provided further insights for Fridriksson’s developing perspective. He found another mentor in psychology professor Chris Rorden, an experience that deepened Fridriksson’s commitment to interdisciplinary approaches.

“Through my programs, I gained insight into many overlapping issues in the field and became a public health advocate for life,” says Fridriksson, who took a position as a clinical research coordinator in the School of Medicine after his second USC graduation in 2013.

In 2015, Fridriksson, Hafsteinsdottir and their two children, who were born in South Carolina, returned to Iceland. Hafsteinsdottir works as a speech-language pathologist for the local school district and in a private practice setting.

Fridriksson took a position as a specialist and researcher at Iceland’s Occupational Safety and Health Administration (OSHA). His role focuses on employee health-related policies, workplace health promotion and research projects in prevention and health. On behalf of OSHA, Fridriksson is in charge of Iceland’s workplace response to the #metoo movement and serves on the federal commission to stop sexual harassment in the workplace.

For me, public health is not only about preventing disease but also setting the public agenda to promote well-being for all people.

He also found an opportunity to merge his background in politics with his new expertise in public health. “After moving back to Iceland my interests in politics grew as I saw the health disparities in my own community,” he says.

Fridriksson was elected president of city council, and he is currently filling in as a member of Althing, Iceland’s national parliament. With so many hats to wear, Fridriksson’s daily schedule can include anything from invited talks to parliament or at other events throughout Europe, advocating for hospital funding to increase access to healthcare, or convening stakeholders to discuss the environmental studies confirming heightened pollution from a new smelting factory in his hometown.

“There’s no doubt in my mind that Jóhann’s education from the Arnold School has opened many doors for him,” says his brother, Julius. “Here is a person who is well-educated and informed on the issues. He’s applying what he’s learned every day and with a lot of credibility too.” 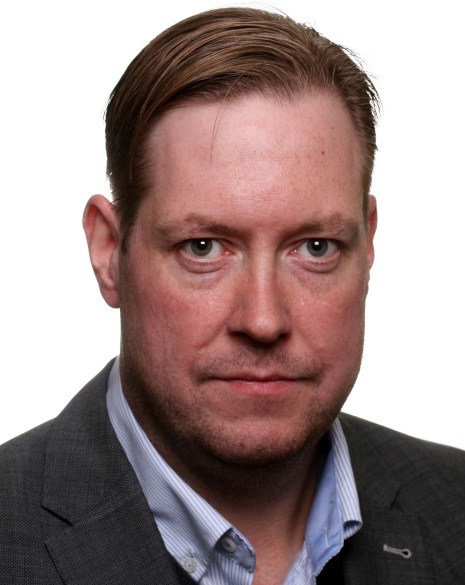 Jóhann Fridriksson is an alumnus of the Arnold School's bachelor of arts in public health and the master of science in publich health in health promotion, education, and behavior programs. He is pictured at the top of the page with the logo for Iceland's OSHA organization.