Alicia Dahl, an August graduate of the Arnold School’s Ph.D. in health promotion, education, and behavior (HPEB) program, will join the faculty ranks of the public health sciences department at the University of North Carolina Charlotte this month as an assistant professor.

Originally from Vernon, New Jersey, Dahl became interested in public health while attending Juniata College for her undergraduate degree. Though initially interested in a career in medicine, an infectious diseases class during her sophomore year changed Dahl’s perspective.

She realized she was passionate about preventing disease, rather than treating it, and shifted her path to graduate with a bachelor of science in global health and communication. Dahl then moved to Newark where she earned a master of science in health promotion (behavioral health and nutrition) at the University of Delaware.

During the last semester of her master’s program, Dahl joined the School District of Philadelphia’s Office of Research and Evaluation. She spent the next 18 months there—first as a data analyst and then as a research specialist.

After spending time evaluating students’ knowledge on nutrition concepts with the Eat.Right.Now nutrition program, Dahl realized she needed more education in order to really impact health behaviors that influence childhood obesity. She came to the Arnold School after researching the HPEB doctoral program and talking with her future mentor, associate professor Brie Turner-McGrievy, about her goals.

The next four years (2014-2018) were productive, albeit hectic, for Dahl. She explored her interests in nutrition and maternal and child health by assisting with Sara Wilcox (exercise science) and Jihong Liu’s (epidemiology and biostatistics) Health in Pregnancy and Postpartum (HIPP) Study and with various studies and projects in Turner-McGrievy’s Behavioral Research In Eating (BRIE) lab. She also led her own digital health study, Healthy Motivations for Moms-to-be. So far, Dahl has published six peer-reviewed papers and has several more manuscripts in preparation.

While at USC, Dahl also prepped for her upcoming role as teacher and mentor. As a doctoral student, she mentored undergraduates—Capstone and Magellan Scholars whose projects overlapped with Dahl’s dissertation research.

“I had to figure out how to balance my responsibilities for moving my dissertation forward, providing guidance on the students’ projects, and offering support to their overall growth,” she reflects. “I’m certain I’ll use those time management and prioritization skills as a faculty member so that I can balance teaching, mentoring and research effectively.”

She was also inspired to do be an effective teacher in the classroom. “I had professors who challenged my thoughts and perspectives so that I would understand public health concepts on a bigger scale or through a different lens,” she says. “I plan to apply a variety of teaching methods that I picked up as a student at the Arnold School to my students at UNCC, so that they leave their programs with better critical thinking skills and a passion for public health.”

“I also learned an incredible amount from my advisor, Brie Turner-McGrievy,” Dahl adds. “She was advising a group of four to seven doctoral students a year through the BRIE lab where we discussed professional development skills, received feedback on pieces of work, and collaborated on papers and projects.”

Dahl spent the last year of her doctoral program talking with others about the job market, interview preparation and negotiating the terms of a job offer. “I think I would have been lost if I didn’t have those important conversations with my advisor, fellow students, and others, like Dr. Heather Brandt,” she says. “In the last year of my program, I attended as many professional development events through the Graduate School as possible, which really helped me understand the differences between academic and non-academic career options, the interview process, and long-term expectations.”

Dahl leaves UofSC this month with numerous awards that reflect her many accomplishments. She has won the HPEB Olga I. Ogousson Award, Emerging Scholar in Childhood Obesity Award, Excellence in Research Award from the Society of Behavioral Medicine, Three-Minute Thesis Heat Winner and Second Runner-Up Overall at Discover USC 2018, Christopher Peter Aluah Outstanding HPEB Doctoral Student Award, and Arnold School of Public Health Doctoral Achievement Award. She was also selected to join the TecHealth Summer Sponsorship Program and received and Arnold School travel grant to present her dissertation research findings at the annual conference of the Society of Behavioral Medicine.

“Looking back (to the May Hooding Ceremony), I felt confident in where I was finishing the program; I felt prepared and ready for my next step after graduation, but to hear my name called for those awards was the culmination of an enriching and rewarding student experience at the Arnold School,” Dahl says of receiving both the department- and School-level awards for doctoral achievement. “My hard work paid off in tremendous ways but was ultimately supported by the opportunities and people at the Arnold School.”

Now Dahl’s thoughts are turned to her new position. She is looking forward to the fresh start and challenges that UNC Charlotte offers. She found her new department to be the best fit for beginning her academic-research public health career because of the programs in place to support early-career researchers with grant applications and collaborations.

“I also had the opportunity to speak with two classrooms of UNCC students during my interview process and I immediately felt connected with the student population and was inspired to be a part of their program,” Dahl says. “I have always enjoyed lecturing and mentoring students and now I can do so in a more official role. I am definitely excited to be standing at the front of a classroom instead of sitting at the desks this fall!” 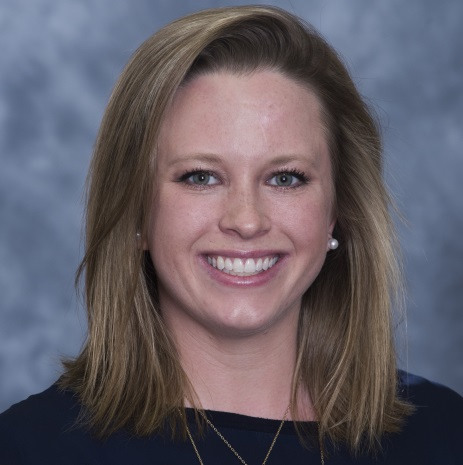 Alicia Dahl graduated with a Ph.D. in health promotion, education, and behavior.