Associate professor Mohammed Baalousha organized and chaired the 19th International Symposium on Field- and Flow-Based Separations (FFF2018) in May of this year. An associate professor in environmental nanoscience within the SmartState Center for Environmental Nanoscience and Risk (CENR), Baalousha led the local organizing committee, which included postdoctoral fellow Jingjing Wang, undergraduate research assistant Madeline Terpilowski, and conference coordinator Elizabeth Caulder. He also chaired the scientific committee, which selected the invited speakers, reviewed all abstracts, and planned the conference scientific program.

The conference was sponsored by the National Science Foundation, Postnova analytics, Wyatt technology, and Wiley. It was also supported by the office of the vice provost for research, the office of the Dean of the Arnold School of Public Health, the department of environmental health sciences, and the office of research of the Arnold School of Public Health. “I am very grateful to all those who sponsored and supported the conference,” says Baalousha.

One of the globally leading conferences on molecular and nanoscale separations, FFF brings together scientists, engineers, regulators and industry stakeholders concerned with separation and characterization in a variety of areas. Topics addressed include manufactured nanoparticles and nanomaterials, environmental nanoparticles, colloids and particles; natural and synthetic macromolecules; proteins, biomacromolecules and biomarkers; pharmaceuticals, biopharmaceutics and drug carrier systems; cells and viruses; and food and agriculture.

FFF2018 was a four-day event held at the Hilton Columbia Center Hotel and was preceded by a workshop. This year’s conference offered a particular focus on new developments and applications of all forms of FFF and related field- and flow- separation techniques. Nearly 100 attendees gathered in Columbia from 15 different countries, including participants from Europe, North America, and Asia. Sixteen industrial delegates and 18 academic institutions were among the attendees. “Many delegates, who visited Columbia for the first time, were impressed with the city of Columbia,” says Baalousha.

An additional 41 participants provided oral presentations and another 36 gave poster presentations. With sponsorship from Wiley, students competed for best presentation and best poster awards. The conference also recognized two of the outstanding scientists in the field: Michel Martin for his many contributions to the fundamental theory and practice of field-flow fractionation and Karl-Gustav Wahlund for his foundational work to establish and advance asymmetrical flow field-flow fractionation.

“All attendees who spoke to me said that they were impressed by the conference organization, and the warm welcoming atmosphere the local organizing committee,” says Baalousha. “This is the best conference I’ve attended,” Xiaoming Xu added.

“After two years of preparation and four long days of intensive scientific presentations and discussions, I am relieved and extremely pleased with how smoothly the conference went and how well attendees received all aspects of the conference including the scientific content, the social events, and the overall organization,” says Baalousha.

“FFF2018 continues a line of activities at the CENR, which have raised its profile internationally and helped it become recognized as a globally leading environmental nanoscience center,” says Jamie Lead, CENR director. Environmental health sciences professor Thomas Chandler, Alan Decho, Geoff Scott and Lead were invited to the conference dinner, and they were pleased by the conference attendance. “The conference had an excellent scientific breadth and depth and Dr. Baalousha did an excellent job as chair. I would like to thank all those, especially within CENR, who helped make this such a successful event.” 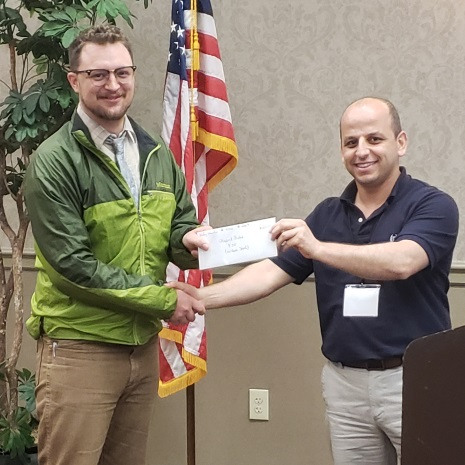