I Am Public Health: Akhtar Hossain

“In the part of the world I am from, we rarely get a chance to choose the area of study,” says Bangladeshi biostatistics doctoral candidate Akhtar Hossain. “Limited seats at the universities and a very high number of students make the competition difficult. More commonly, the study areas choose us.”

So Hossain began studying statistics—not by choice but by happenstance—and yet he fell in love with the discipline all the same. “It feels amazing to make numbers talk,” Hossain says. “It’s like magic to reveal the messages hidden in data, and it brings peace of mind to think of the good impact of findings from analyses.”

After earning bachelor’s and master’s degrees in statistics from the University of Dhaka, Hossain began working as a senior research assistant and statistical consultant at the International Centre for Diorrhoel Diseases Research in Bangladesh and taught in statistics department at his alma mater. He began publishing research papers in applied public health, and his interest in the field grew. Hossain decided to pursue a Ph.D. in biostatistics after determining it to be the best combination of his statistical research and public health interests.

It’s like magic to reveal the messages hidden in data, and it brings peace of mind to think of the good impact of findings from analyses.

The Arnold School’s rankings in U.S. News and World Report first attracted Hossain to the University of South Carolina. Once he was accepted, Hossain contacted his advisor and USC’s international student community. Their feedback made his decision to attend Carolina an easy one. The eventual enrollment of Hossain’s wife, Nahid Sultana Sumi, in the same doctoral program and the arrival of their daughter made the move a family affair.

“Whenever I look back or even into the future, I always feel proud to be a gamecock!” says Hossain. “I want to thank International Student Services at USC for being so supportive.”

Through his program in the epidemiology and biostatistics department, the South Carolina SmartState Center for Healthcare Quality Junior Scholar has cultivated his interests in developing statistical methodologies for analysis of longitudinal and correlated data. His applied research interests include HIV/AIDS, child survival, domestic violence and behavioral health. To date, he has published 10 peer-reviewed papers and has more than 15 additional manuscripts in process.

Hossain’s dissertation project focuses on developing statistical joint models for dynamically predicting co-morbidities among chronic disease patients. He is currently applying his methods to predict co-morbidity risk among South Carolina HIV/AIDS patients. Once implemented, the model and findings will help the policymakers and physicians to make targeted interventions and personalized treatments respectively to reduce co-morbidity risks as well as deaths.

Set to graduate in December of this year, Hossain will pursue an academic career focusing on teaching and research. “I believe, as Ph.D. graduate, this will be the best way of sharing my acquired knowledge as well as creating new knowledge,” he says. 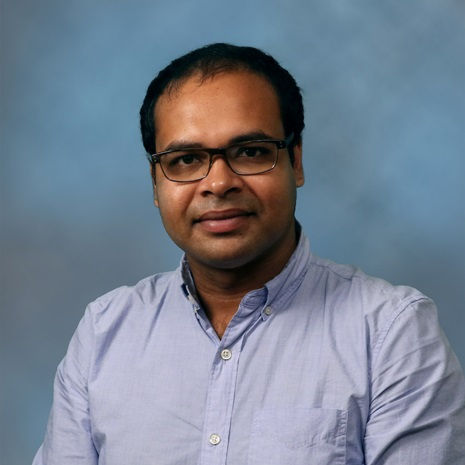 Graduating in December of this year, doctoral candidate Akhtar Hossain is combining his passion for statistics and public health to forge career in biostatistics.