Shuo Xiao, assistant professor of environmental health sciences (ENHS) and director of the Reproductive Health & Toxicology Laboratory, has been awarded a two-year, $214K grant from the National Science Foundation (NSF). Working in collaboration with the National Oceanic and Atmospheric Administration (NOAA) in Charleston, South Carolina, Xiao will use the funding to support a project examining the impact of marine contaminants on ovarian function of bottlenose dolphins.

“The ovary is the primary female reproductive organ and functions to support reproduction, endocrine system, and other general health,” explains Xiao. “Increasing evidence shows that multiple environmental chemicals can cause toxicities in the ovaries in both humans and other mammalian species.”

The study focuses on bottlenose dolphins, which are federally protected, and their status as apex predators makes them more susceptible to the bioaccumulation of many contaminants, such as persistent organic pollutants (POPs). Previous research on the effects of marine contaminants on female bottlenose dolphins’ reproductive viability rely on recording whether the female dolphin can be pregnant and give birth to a viable calf. However, specific ovarian functions (e.g., hormone secretion, follicle development, and oocyte maturation and ovulation) have proven to be difficult to monitor.

In his study, Xiao will use cryopreservation and microfluidic technologies to engineer bottlenose dolphin ovarian cycle. His method for cryopreserving ovarian cells, vitrification, is also an ideal method for use in research with other cell types. Xiao will conduct his study in a simulated in vitro environment, utilizing a novel approach: a tissue chip that mimics the structure and biological processes of the female reproductive system.

During his three-year postdoctoral research fellowship in the department of obstetrics and gynecology at Northwestern University, Xiao worked with professor Teresa Woodruff to develop a replica of the 28-day hormone/menstrual cycle found in the female reproductive system. This work was a part of the National Institutes of Health (NIH)’s Tissue Chip Program, which enables researchers to safely and cost-effectively study the effects of drugs and toxins in accurate models that mimic the structure and biological processes of human organs, such as the lung, liver and heart.

Using this innovative method, Xiao will test the marine contaminants’ toxicity to the reproductive system of female bottlenose dolphins. “One of my long-term research goals is to understand how environmental factors impact female reproduction,” says Xiao, who also studies how various pharmaceuticals affect the female human reproduction and fertility using his tissue chip technology.

Findings from this study can be used to inform future reproductive toxicity testing, including toxicity screenings for humans and other mammalian species. They can also be applied to efforts aimed at preserving endangered mammalian species. 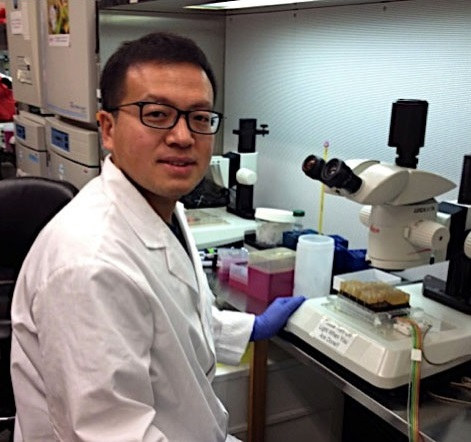 Shuo Xiao is an assistant professor in the department of environmental health sciences and the director of the Reproductive Health & Toxicology Laboratory.