When Raja Fayad’s life was cut short in February of 2015, he was in the middle of some very important work. In addition to teaching classes and conducting ongoing colorectal cancer research, the exercise science associate professor was mentoring four graduate students and had just begun a new research project that would examine an important trio of factors impacting colorectal cancer: gut inflammation, the gut microbiome, and the physical aspects of the gut.

Fayad’s master’s students, Sarah Depaepe and Alexander Sougiannis, were preparing to defend their theses. Doctoral student Arpit Saxena was almost ready to defend his dissertation. With support from Arnold School faculty members, all three students successfully defended their projects and graduated that May.

However, Kamaljeet Kaur, a Ph.D. student nearing the research phase of her dissertation project, found herself in limbo. Not only was she reeling from the sudden and tragic death of her mentor, but she lost him at the most critical stage of her doctoral program.

Originally from India, Kaur joined the Arnold School in 2010—a year after her then-fiancé and now-husband, Fayad’s other doctoral mentee, Saxena. She had been admitted into USC’s Integrated Biomedical Science Program, where she rotated among various research labs. She wanted to research cancer disease models and found her interests aligned with Fayad’s.

“It was his professional mannerism and the way of clearly explaining the concepts of study in his lab that was a big reason for me joining his lab as a graduate student,” Kaur says. “Dr. Fayad has always supported all of his graduate students in bringing new ideas to the research bench, and he was very keen on giving us professional exposure in terms of writing collaborative publications and review articles.”

Fayad had recently been notified that he had received funding for a pilot project that would allow him to examine the cycle of inflammation and abrasion in the colon by looking at three key aspects of the gut. He would collaborate with fellow investigators at the USC Center for Colon Cancer Research using funds from the National Institutes of Health and the National Cancer Institute. After his death, the future of the project was also uncertain.

Kaur also spent a semester working in each of her mentors’ labs. There, she gained additional research experience in parallel with writing her dissertation during the final year of her doctoral program. After her 2016 graduation, Kaur began a postdoctoral fellowship in microbiology at the University of Alabama at Birmingham, where she is learning new techniques while studying allergic asthma and inflammation. Meanwhile, Saxena is working toward earning his medical degree, like Fayad.

“Drs. Carson and Chanda have been truly supportive and kind towards me, and they made a difficult time seem smooth by their guidance; without them I wouldn’t have completed my studies,” says Kaur, who also benefited from support from her other two committee members, professor Mark Davis and assistant professor Xuewen Wang. “Above all, the blessings of Dr. Fayad supported me and guided me throughout my path towards attaining a doctoral degree.” 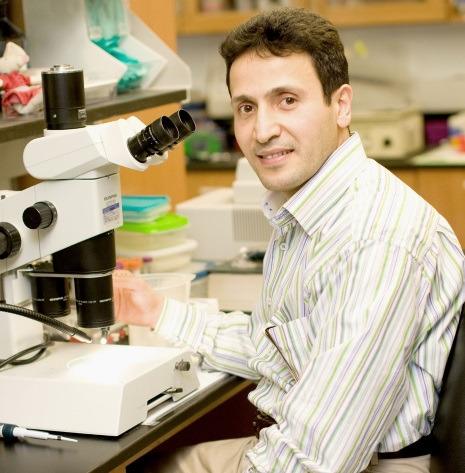 Raja Fayad was an associate professor of exercise science. He is pictured above in his lab and and second to the right in the group photo of researchers above.