One of the biggest lessons for Angelette Weaver during her undergraduate years has been that she doesn’t have to make a choice between her favorite two fields: public health and nursing. “They are both disciplines that should be used in tandem to make sure that patients all over the country and world have the equitable health they deserve,” she says of the bachelor programs, which constitute two of more than 100 health science degree programs offered by UofSC.

The Columbia, S.C., native initially majored in nursing but transitioned to public health when she found herself asking questions, such as “How does not having insurance affect someone’s life? What can we do now to change people’s health mindsets?”

“I wanted to learn more and more and be able to connect the dots from biological all the way to social, and I feel like public health gave me that insight,” she explains.

Now nearing the completion of her degree, Weaver believes that public health has given her the foundation to pursue a nursing degree so that she can utilize the two backgrounds together. After participating in the 2017 Nursing Fellow for the South Carolina Area Health Education Consortium (AHEC) Summer Careers Academy at the Medical University of South Carolina, Weaver has her sights set on their accelerated bachelor of science in nursing program.

“Going into the program, I did not know what to expect, but every aspect of the program was enriching to me,” she says. Working on a project with fellow UofSC public health student Amber Linnen, Weaver developed a program intervention related to mental health of African Americans in the southern region of the U.S. Together, they won second place.

After completing her degrees, Weaver would like to travel the country, interacting with the most vulnerable populations and implementing beneficial programs. She has also set her sights on making an impact from a leadership perspective—thanks to a chance encounter during her junior year.

During an event hosted by USC, former Deputy Director of the Office of Women’s Health for the US Department of Health and Human Services, USC nursing alumna, and Arnold School adjunct faculty member Frances Ashe-Goins served as a panelist. “After the panel I came up to her, and I told her that I would have her job one day!” says Weaver. “The steps that she took to get to where she is today and the advice she gave me to put towards my career was so important and inspirational to me.” 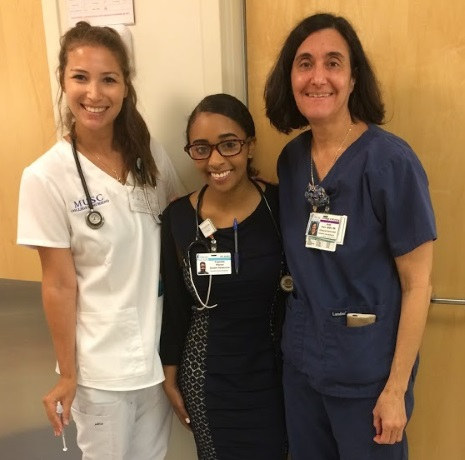 Now nearing the completion of her degree, Angelette Weaver (pictured center) believes that public health has given her the foundation to pursue a nursing degree so that she can utilize the two backgrounds together.