Cincinnati, Ohio, native Joshua Jeffery’s first job out of college quickly confirmed that he was in the wrong field. The business administration grad (double major in finance and economics) was working as a business analyst for a medical reimbursement company when he decided he needed to return to his passion: athletics.

As a college baseball player, Jeffery already had an inkling that exercise science was a better fit for his interests. “I found that I loved the physical training aspect as much as I loved playing the sport itself,” he says.

He decided to pursue a career in strength and conditioning and physical preparation and began researching graduate programs that would allow him to work with athletes. Again and again, UofSC appeared at or near the top of every list he found. Those rankings, combined with the volume of publications produced by the exercise science department, the reputation of the faculty and the opportunity to work with SEC-caliber athletes, made the Arnold School his number one choice.

In 2013, Jeffery moved to Columbia to enroll in the Master of Science in Exercise Science program, with a concentration in applied physiology. For his master’s thesis, he studied strength and power characteristics of South Carolina high school athletes. After graduating as the department’s 2015 Outstanding Master’s Student of the Year, Jeffery launched Carolina Performance Training, which provides custom coaching, programming and nutrition services.

A year later, he returned to the Arnold School to earn a Doctor of Physical Therapy from his old department – continuing to run his business throughout the three and a third year program and growing it to include seven coaches. To fulfill the research component of his degree, Jeffery studied the potential of blood flow restriction training to improve cardiorespiratory endurance among CrossFit athletes. He is particularly interested in innovative ways to improve high-end athletic performance and improving return-to-sport outcomes to help individuals get back to doing what they love as soon as possible.

For his doctoral project, he continued working with exercise science clinical assistant professor Raymond Thompson, who had served as his advisor during his master’s program. “His help and guidance have really helped me grow as a student and researcher,” Jeffery says.

He also found physical therapy mentors in program director Stacy Fritz and clinical associate professor Cathy Arnot. “They are a huge reason for shaping me as a clinician and showing me how to practice at a high level,” says Jeffery.

That practice will take place at Jeffery’s business, which he merged with Vertex Physical Therapy Specialists earlier this year, and renamed Vertex Performance Training. Based in Columbia, Jeffery is a co-owner of the two interconnected businesses and director of training for their fitness and sports performance operation. As of January, the December graduate will also serve as a physical therapist – splitting his time between coaching and clinical practice.

“I hope to find a balance between treating patients and coaching so I can incorporate both of my passions,” Jeffery says. “Hopefully, we can grow our businesses and expand to other parts of the Carolinas.”

For anyone else interested in the Arnold School’s 34 degree and certificate options, Jeffery says to go for it. “A career in any area of public health is so rewarding,” he says. Preparing for campus visits is important too. “Before applying for both my masters and my DPT, I set up meetings with the program director for each department, and they were extremely helpful in walking me through the application process and telling what to expect. It provided a ton of clarity and helped reaffirm my decision to look at USC.”

It also helps to have a good support system. “I have to say a huge thank you to my wife, Kelsey,” says the two-time alum. “She has been by my side throughout this whole process and has been so supportive every step of the way.” 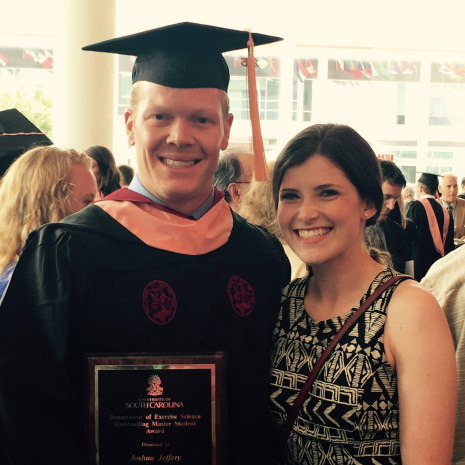 Joshua Jeffery (left, with wife Kelsey), earned a Master of Science in Exercise Science in 2015 and a Doctor of Physical Therapy in 2019.