I Am Public Health: Carlos Avalos

Eleven-year-old Carlos Avalos could not have foreseen just how valuable the Spanish he learned in his native El Salvador would be in his future career when he moved to South Florida. The sixth grader was already bilingual—having attended a French elementary school—and quickly became fluent in English as well.

At the University of Central Florida, Avalos studied biomedical sciences where he had his first encounter with epidemiology when he took an infectious disease epidemiology course his senior year. After his 2015 graduation, he moved to South Carolina. Employed as a medical scribe, Avalos soon realized that he was interested in studying the health of larger groups, with a focus on the Latino population. This interest continued to grow after he joined the Spanish team at a local life and accident insurance company.

“I became interested in health disparities, such as disparities in access to health, while keeping my interests in studying the Latino population,” he says. “I decided to apply to the University of South Carolina's master of science in public health in epidemiology program because I believed that I could contribute to the School’s work with the Latino community in South Carolina and that the interdisciplinary curriculum at the epidemiology and biostatistics department would provide the skills I needed to be successful in achieving these goals.”

During his program, Avalos has narrowed down his research interests to the behavioral aspects of health, such as mental health problems (e.g., depression), while keeping a focus on minority populations. He gained additional experience outside the classroom through graduate assistantships.

Working with mentors Myriam Torres and Emily Mann, Avalos engaged in research and other projects at PASOs, a community-based organization that supports Latino communities throughout South Carolina by connecting them with education and resources. One of these projects was a community-based participatory research study aimed at understanding contraceptive access among recent Latino immigrants in South Carolina.

“Throughout my first year in the program, I learned about how to coordinate a research project involving Latino community members from Dr. Mann, who alongside Dr. Torres, also introduced me to Latino community leaders,” he says. “Without a doubt, they created a foundation on which I can continue to build upon as I work with the Latino community on future projects.”

This year, Avalos worked with three large surveys (i.e., South Carolina Behavioral Risk Factor Surveillance System, Children Health Assessment Survey, and the Pregnancy Risk Assessment Monitoring System) as a graduate assistant with the division of surveillance in the bureau of health improvement and equity at the South Carolina Department of Health and Environmental Control. Using data from these surveys, he has also conducted his own studies, including a project examining healthcare measures among people with depression, one looking at how healthcare access among children is affected by their parents’ access to health, and a third investigating how some unique characteristics of the growing Latino population in South Carolina could affect diabetes and prediabetes rates among this population—all of which he will present at various conferences this spring.

Avalos is focusing his thesis on trends of victimization among Hispanic high school students using data from the Youth Risk Behavior Surveillance System over the last 10 years. He is specifically looking at bullying and violence-related behaviors.

Throughout his program, Avalos has volunteered at the local Good Samaritan Clinic as a Spanish interpreter. He is currently the co-coordinator of the epidemiology and biostatistics journal club, where he helps coordinate discussions on the latest topics in the field.

After he graduates later this year, Avalos plans to earn a Ph.D. in epidemiology. He’s had plenty of advice from his faculty mentors as well as epidemiology doctoral candidate Chelsea Richard, who has helped him expand his research experience and provided professional advice about career planning.

He also has some advice of his own. “Learn from as many disciplines as possible,” he suggests to current and future public health students. “I say this because you will not only be making the most out of your time at the Arnold School but also because you will have to integrate many different aspects of public health research into your projects during your time as students and after graduating.” 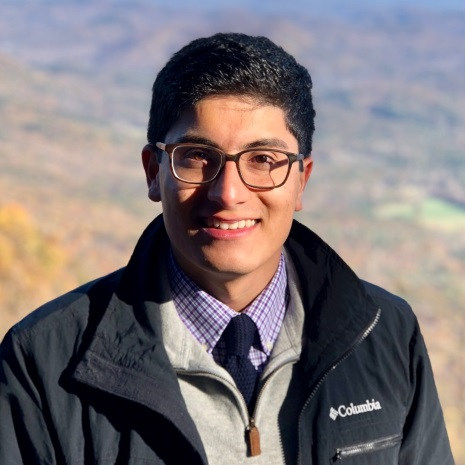 Master of science in public health student Carlos Avalos is pursuing a career in epidemiology to improve health for Latino the population.