Mariah Bernanke loved both sports and the arts growing up. But when the Charlotte, North Carolina, native set her sights on becoming an athletic trainer, she thought she had to give up her interest in the arts.

Then she came to Carolina. Bernanke knew that UofSC had a well-established athletic training program (a part of the exercise science department since 2016), and its Division 1 status would provide opportunities to work with high-level athletes and resources unlikely to be available at smaller schools. What she didn’t expect was that she would learn a way to reintegrate sports and the arts.

“Freshman year, I learned that Cirque De Soleil has athletic trainers, and that really spoke to me,” says Bernanke. “I searched for performing arts athletic training opportunities like working with the Columbia City Ballet and shadowing groups, such as the NYC Rockettes and Harlem Globetrotters.”

While many of her classmates were applying for NFL internships for the summer before their senior year, Bernanke was also looking for something big, but with the performing arts. Through her research, she discovered Neurosport Physical Therapy, an organization that supports a large portion of Broadway shows and the only group that covers touring Broadway shows. They also cover music tours and have recently branched out to providing medical services to the film industry.

That summer, Bernanke shadowed the athletic trainer of an off-Broadway show, Sleep No More, in New York City and loved it. But as she approached her May 2017 graduation, she wasn’t sure what she should do.

“I was really interested in getting into performing arts but it’s still a growing field, a niche, and really hard to find opportunities,” says Bernanke, who decided to ask athletic training clinical instructor Dr. Kari Wolf-Odland for advice. “She told me to ‘just apply, it won’t hurt to try, and if you don’t get one of your first choices, then try your back-up options,’ and that’s definitely what I needed to hear.”

Immediately following graduation, Bernanke spent the summer as an assistant athletic trainer with Blue Stars Drum and Bugle Corps. She traveled the country on a sleeper bus as the Corps competed in different cities almost every day. Then Neurosport called.

In her role, the Sims Scholars Award recipient sees performers every 30 minutes. As she’s treating one patient, other performers will come into the room for warm-up, self-maintenance, and strengthening exercises, so she can answer questions and correct poor or faulty movement patterns while she works.

“The show is told almost completely through very intense and sometimes acrobatic dance, so there is no question that these performers are high-level athletes,” she says. “This show in particular, because of the physicality and space they perform in, has quite a few acute injuries. If an injury occurs during the show, being able to quickly assess the situation and help determine if a performer is able to continue is important.”

Bernanke’s work is very different from traditional sports settings, but she faces many of the same challenges. She treats concussions, tapes injuries (with modifications to allow necessary mobility for dance), and checks in on the performers with regard to exercises, general medical conditions, nutrition, and psychological health.

Though she continues to learn something new every day, the Fred C. Wikoff Scholarship recipient feels well-prepared by her athletic training curriculum at the Arnold School. Bernanke is one of the last cohorts to graduate from the bachelor’s program as the athletic training program prepares to transition the existing bachelor’s program to a graduate-level program in order to meet changing accreditation requirements set forth by the Commission on Accreditation of Athletic Training Education. The new master’s degree in Athletic Training is expected to begin in the summer of 2019 (see accreditation updates for the latest news on the transition).

“Ms. Amy Hand and Dr. Justin Goins were great professors that were always willing to sit down with me and help answer questions or give advice, in addition to the unwavering support I received from the AT program director Dr. Jim Mensch, says Bernanke,” reflecting on her experience with the program. She only wishes that there were more performing arts opportunities for athletic trainers and that those available were more visible. Bernanke had luck with resources (e.g., website, Facebook groups, conventions) provided by the National Athletic Trainer’s Association and the Performing Arts Athletic Trainers’ Society.

“Take chances,” Bernanke advises other students. “Whether it’s applying for a research grant multiple times, mailing reach graduate schools and jobs your resume, or sending out multiple emails to other athletic trainers in positions to help you achieve your goals; you never know which effort will be the one to pay off big and land you where you want to be.” 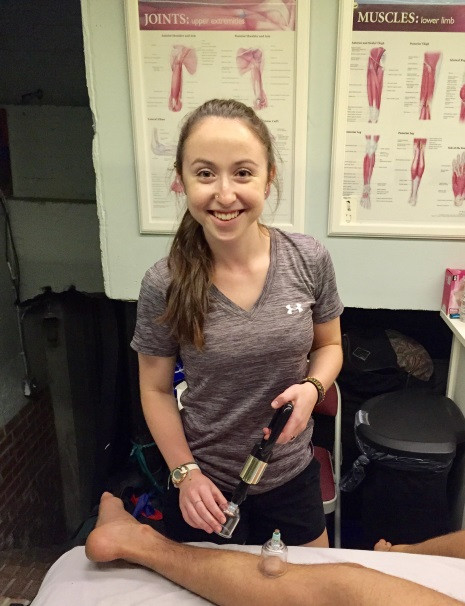 Alumna Mariah Bernanke combined her passion for sports and performing arts by pursuing a career as an athletic trainer on Broadway.