During her 13 years as a gymnast, Emily Meyerl experienced her share of injuries, consequently spending a lot of time with athletic trainers and physical therapists rehabilitating. “Through these interactions, I knew that I wanted to spend the rest of my life helping athletes as I was helped by so many,” she says.

After attending small, private Catholic schools for her K-12 years in Baltimore, Meyerl knew that she was ready for a change. She was looking for a big school in the South, but it had to have a strong athletic program because she already knew she wanted to pursue a degree in athletic training.

“USC really stuck out to me first because of the beautiful campus, but the true selling point for me was the amount of pride that Gamecock fans have in all of their sports,” she says. “As an athletic training major, a student body and fan base that supports their athletic program sealed the deal for me.”

The Arnold School’s athletic training program (a part of the exercise science department since 2016) offered Meyerl the array of clinical sites (e.g., USC sports, small/large high schools, other colleges, private practice clinics) she was seeking. Just as she has hoped, one of these sites confirmed Meyerl’s interest in working at a high school in the future.

“Cardinal Newman School’s athletic trainer, Rebekah Gaston, made me truly fall in love with working in the high school setting,” Meyerl says. “She showed me the importance of balancing work with family and friends, which is hard to do with this profession because of the late hours and weekends, and I will always look to her as an inspiration for me.”

USC really stuck out to me first because of the beautiful campus, but the true selling point for me was the amount of pride that Gamecock fans have in all of their sports.

In the classroom, Meyerl also found a mentor in USC’s athletic program clinical education coordinator, Amy Hand. “Ms. Hand is someone who I know I can go to with an issue, and she will give me great advice or I can also go to her about an achievement and she will be my biggest cheerleader,” Meyerl says of Hand, who also does a lot of work with the Young Professionals’ Committee as the District III representative to the National Athletic Trainers’ Association. “The fact that she puts so much time into her students, students in the district, and is working on completing her doctorate also is something that I find very special about Ms. Hand.”

Meyerl is already following her mentors’ examples by balancing clinical rotations with academic and service work. In parallel with maintaining a spot on the Dean’s list every semester and getting the most out of her clinical experiences, she has also become very involved in professional organizations.

“These leadership roles have made me take a lot of responsibility and allowed me to work one-on-one with our faculty and develop relationships with them which are incredibly beneficial,” she says. “Also, being able to work with students and faculty from so many different states has been something that has been very eye-opening and has taught me a lot about the profession as a whole outside of USC.”

“All of these are huge honors for me that I am incredibly grateful to have received,” says Meyerl, who is especially proud to receive an award named after Edward Block, the long-time athletic trainer of the Baltimore Colts whom she believes made a big impact on the athletic training profession. “The fact that I am being honored with an award that is named after such a big name in the Baltimore area makes this award that much more special to me.”

This summer, Meyerl has already lined up an internship with Camp Woodward in Pennsylvania, where she will gain hands-on experience working with gymnasts, cheerleaders, skateboarders, and BMX riders. After her 2019 graduation, she plans to become a graduate assistant while getting her master’s degree in order to gain additional experience as a certified athletic trainer and eventually work at a high school while staying involved with her profession through leadership and service opportunities. 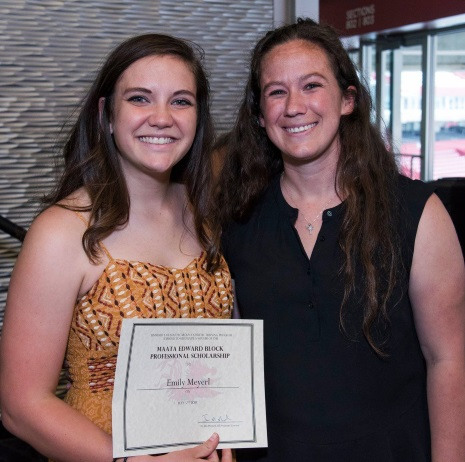